First a note.  Last Thursday – May 5 – was the Feast of the Ascension:

The Feast … commemorates the bodily Ascension of Jesus into heaven.  It is one of the ecumenical feasts (i.e., universally celebrated) … ranking with the feasts of the Passion, of Easter, and Pentecost.  Ascension Day is traditionally celebrated on a Thursday, the fortieth day of Easter… 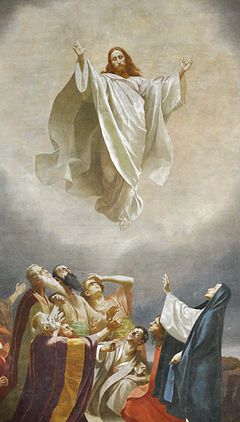 Note that the 40-day calculation is from Acts 1:3.  That passage – in the GWT – said, “After his death Jesus showed the apostles a lot of convincing evidence that he was alive.  For 40 days he appeared to them and talked with them about the kingdom of God.”

Which means this year Pentecost is next Sunday, May 15.

Pentecost is also called the “Birthday of the Church,” for reasons discussed in last year’s On Pentecost – “Happy Birthday, Church!”

But first things first.  You can see the full Bible readings for last Thursday’s feast day – May 5 – at Ascension Day.  Those Bible readings include two accounts of the Ascension, including Luke 24:51 and Acts 1:9.  (With both books written by the same Luke the Evangelist.)

I covered the subject two years ago, and again in Ascension Day 2015, which noted this:

So first Jesus got crucified, for us.  Then He “descended into Hell,” for us.  Then He reappeared on earth and stuck around 40 days, just to make sure His message got through.  Then He ascended to Heaven, to “sit at the right hand of God.”

Which brings up the top-image caption, that before Jesus could “Ascend into Heaven, He had to Descend into Hell.”  Which could be another way of saying “Into Each Life Some Rain Must Fall.” 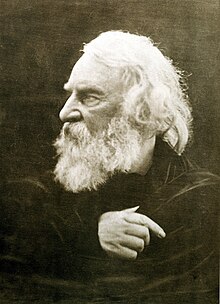 That was the name of a 1944 song performed by The Ink Spots, and “featuring Bill Kenny, and Ella Fitzgerald.”  But in turn the name of the song came from Henry Wadsworth Longfellow‘s poem “The Rainy Day.”  (He is shown at right.)

And that could be another way of saying that – just like Jesus had to “descend into Hell” – we too face something similar.  Before we can hope to reach our own “Promised Land,” we’ll have to spend a lot of time Wandering in the Wilderness.

More to the point, Paul the Apostle touched on the subject in Ephesians 4:1-16.  (Which just happened to be the New Testament DOR for today, May 11.)  That is In Ephesians 4:9, Paul said of Jesus:  “What does ‘he ascended’ mean except that he also descended to the lower, earthly regions?”

Which sounds a bit like circular reasoning, but bear with me.  (And Paul.)

For one thing, that seems to apply to all of us.  We all pretty much all have to descend before we can ascend.   Note also that the NIV has this passage set in parentheses, which are “used in writing to mark off an interjected explanatory or qualifying remark.”  (See also John 3:13, “No one has ascended into heaven except the One who descended from heaven – the Son of Man.”)

Which could also be interpreted like this:  For Jesus, descending into Hell – from here on Earth – might not have been all that different from descending “down to Earth,” from Heaven.

(Not to mention having to go through the whole process of being born – and worse – being a teenager who did “know everything.”  See Jesus as a teenager – REDUX, including the image below left.)

For a more erudite explanation of what Paul may have meant, see Ephesians 4:9 Commentaries.  The initial commentary noted that Ephesians 4:9 was part of a “parenthesis, designed to bring out the pervading idea” of the Divine Humanity of Christ as “‘filling all in all’ and ‘gathering all things’ into Himself.”

A later commentary on Ephesians 4:9 said that in “descending into Hell,” Jesus had actually gone down, way down:

To the lowest state of humiliation.  This seems to be the fair meaning of the words.  Heaven stands opposed to earth.  One is above; the other is beneath.  From the one Christ descended to the other; and he came not only to the earth, but he stooped to the most humble condition of humanity here…

And all of which seems to have been necessary for Jesus to become – in a sense – your own personal Ultimate Court-appointed Defense Attorney.  (See The GIST, Parts I and II.)

All of which leads – metaphorically or otherwise – to the Good News.  In this case, of next Sunday’s celebration of Pentecost as the “birthday of the Church.”

In The readings for Pentecost (6/8/14), I noted that the day is sometimes called “‘Tongue Sunday.”  That’s both because of the ‘tongues of fire'” routinely shown in paintings of the event, “and because of the phenomenon of ‘speaking in tongues.'”  (See Glossolalia.)

The post noted that some witnesses thought those “tongue-speakers” were just babbling drunkenly.  On the other hand, there were enough people who understood what the “babblers” were saying to be convinced of Peter’s response.  That is, beginning at Acts 2:15 Peter responded to the charges of the witnesses who mocked the disciples as drunken babblers.  “These people are not drunk, as you suppose.  It’s only nine in the morning!”

And as a result of Peter’s response, “Those who believed what Peter said were baptized and added to the church that day – about 3,000 in all.”  See Acts 2:41.  And that’s why Pentecost is called the Birthday of the Church.  See also On Pentecost – “Happy Birthday, Church!”

That post included the full-length version of El Greco‘s interpretation of the event.  (Part of which is seen at right.)  It also included a note that Pentecost marks the beginning of “Ordinary Time.”

That is, in the liturgical calendar the season of “Ordinary Time” – as it’s known by Catholics – can take up over half the year.  In the Anglican liturgy this time is the Season of Pentecost.  That season begins on the Monday after Pentecost,  and goes on “through most of the summer and autumn.”  It may include up to 28 Sundays, “depending on the date of Easter.”

This year the Last Sunday after Pentecost doesn’t come until next November 20.  The Sunday after that is the First Sunday of Advent, the season that leads up to Christmas.

But we’re getting ahead of ourselves.  As noted in “Happy Birthday, Church:”

To sum up, the Pentecost described in Acts “was a momentous, watershed event.”  For the first time in history, God had empowered “all different sorts of people for ministry.  Whereas in the era of the Old Testament, the Spirit was poured out almost exclusively on prophets, priests, and kings,” on this Day of Pentecost the Holy Spirit had been given to “‘all people.’”

Re: “parentheses.”  See also Bracket – Wikipedia, referring to the punctuation marks used “to set apart or interject other text.”  The article noted that chevrons “(< >) were the earliest type of bracket to appear in written English.  Desiderius Erasmus coined the term lunula to refer to the rounded parentheses (), recalling the shape of the crescent moon.”

The full title of the “wandering in the wilderness” link is What We Can Learn from Wandering in the Wilderness.  Rabbi Geoffrey A. Mitelman noted three valuable lessons we can learn, including:

Re: “erudite.”  That term has come to mean “having or showing great knowledge or learning.”  But see Erudition – Wikipedia, which noted that – as originally used – a scholar was said to be “erudite” when his instruction “effaced all rudeness … that is to say smoothed away all raw, untrained incivility. Common usage has blurred the distinction from ‘learned’ but the two terms are quite different.”

Re: Pentecost and barbecue.  That seems to be a tradition, especially in Anglican/Episcopal churches. See Pentecost Praise and Barbecue – anglican-cb.org, and also Pentecost BBQ & Potluck | Christ the Good Shepherd.  Or just Google “barbecue pentecost.”

The lower image is courtesy of Pentecost – Wikipedia, with the caption:  “A Western depiction of the Pentecost, painted by Jean II Restout, 1732.”