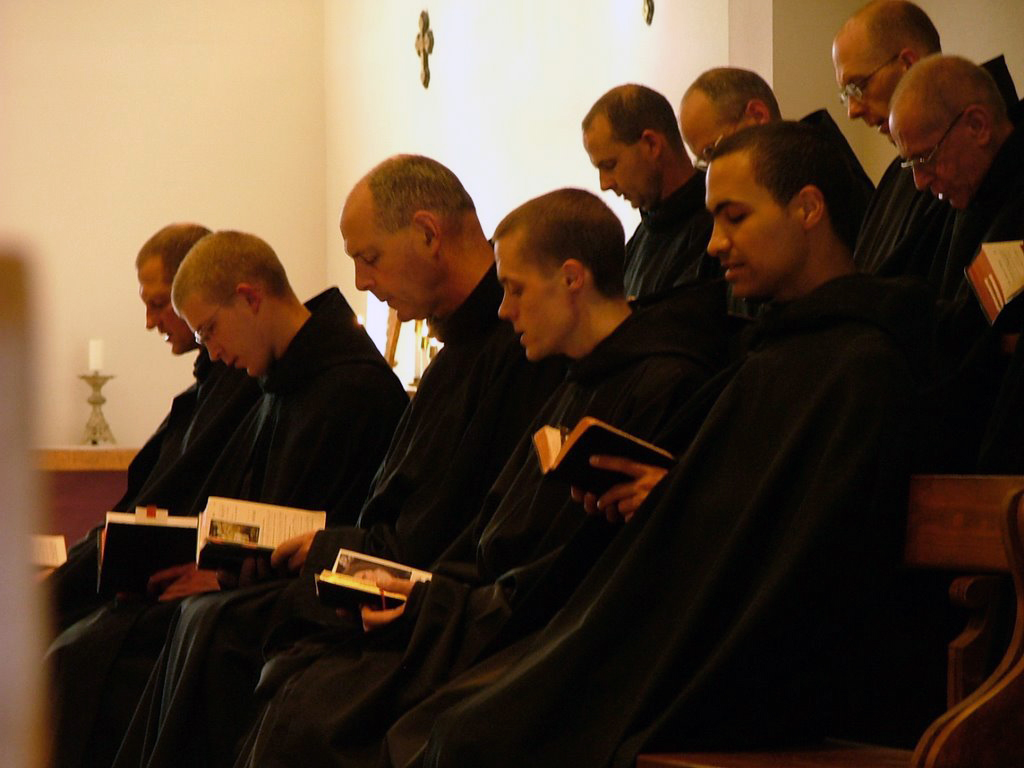 As noted in The Scribe – above – “DOR” stands for Daily Office Reading.

That’s where the “DOR” in “Dorscribe” comes from.

The Daily Office is a two-year cycle of Bible readings.  (Thus, “Daily Office Readings.”)  That means that if  you follow the full set of readings,  you’ll get through virtually the entire Bible one time in two years.  (And the psalms and Gospels three to four times.)

Then there’s the Revised Common Lectionary.  It’s the one that sets out the Bible readings for Sundays, and it follows a three-year cycle.  That in turn means that if you attend an Episcopal church each Sunday for three years, you’ll hear virtually the whole Bible read to you, “once in three years, and the psalms and Gospels three to four times.”

The canonical hours mark the divisions of the day in terms of periods of fixed prayer at regular intervals…   In western Catholicism, canonical hours may also be called offices, since they refer to the official set of prayer of the Roman Catholic Church…   In the Anglican tradition, they are often known as the daily office (or divine office), to distinguish them from the other ‘offices’ of the Church, i.e. holy communion, baptism, etc.

Wikipedia added that the practice of making such daily prayers “grew from the Jewish practice of reciting prayers at set times of the day,” as for example in the Book of Acts, where “Peter and John visit the temple for the afternoon prayers (Acts 3:1).”  (E.A.)

This practice came down through the centuries, and began with the Apostles.  Then – later – as monasticism spread, monks – like those seen in the top image – developed standardized hours and liturgical formats for daily prayer.  (And – presumably – for daily Bible study.)

“Already well-established by the ninth century in the West, these canonical offices consisted of eight daily prayer events: lauds, prime, terce, sext, none, vespers and compline, and the night office, sometimes referred to as vigils.”  The canonical hours article added: 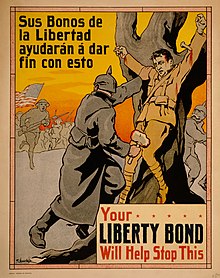 As a side note, that method of telling and relating time is shown in Mark 15:33 and Matthew 27:45, telling of Jesus’ crucifixion and death.  (An update on that theme is shown at right.)  Those passages referred to the sixth and ninth hours of the day:  “Now when the sixth hour had come, there was darkness over the whole land until the ninth hour.  And at the ninth hour Jesus cried out with a loud voice … and breathed His last.”

Thus the “darkness” at issue started at noon and lasted until 3:00 in the afternoon.  “Canonical hours” concluded:

The traditional structure [of the Daily Office today] reflects the intention by the reforming Archbishop of Canterbury, Thomas Cranmer, to return to the office’s older roots as the daily prayer of parish churches…   Like many other Reformers, Cranmer sought to restore the daily reading or singing of psalms as the heart of Christian daily prayer.  Since his time, every edition of the Book of Common Prayer has included the complete psalter, usually arranged to be read over the course of a month…   The daily offices have always had an important place in Anglican spirituality.

(Emphasis added.)  In other words, over the centuries the practice of daily Bible reading and prayer seven times a day became too onerous for us working-class folk.   So Thomas Cranmer started the present system of studying the Bible at most twice a day.

For each day’s readings – in such a Lectionary – you’ll see two sets of psalms, “AM” and “PM.”  (In other words, one set for morning prayer and one for evening prayer.)  But given the difficulty most people have in setting aside two times a day for Bible reading, you could just read both sets of psalms at one time, which for me usually happens first thing in the morning.

See also The Daily Office | From the Diocese of Indianapolis, also known as “dailyoffice.org.”

The Daily Office is an ancient way to pray.  There are many ways to pray, including your own cries to God of joy and sorrow and need.  Such prayers are intensely personal, while the Office gathers up all our prayers so that we can pray together.  From monasteries to churches to private homes, people have been praying the Daily Office for thousands of years.  Why?  Because it brings us closer to God. 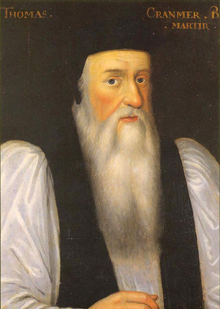 (Emphasis added.)    The article noted “a fellow named Thomas Cranmer.”  (Seen at left.)  He’s the one “who compiled the Book of Common Prayer,” in 1549.  He’s also the one who simplified the Bible-based – and long practiced – seven prayer services a day into two.  (Morning and evening prayer.)

That is, “He simplified Christian practice into a discipline ordinary people can keep.  Pray once in the morning and once at night and you’ll invariably draw closer to the Holy One.”

So there you have it.

Unfortunately, it would be impossible to highlight the Daily Office on a regular basis in a blog like this, so I’ll be focusing mainly on the weekly Sunday Bible readings.  That in turn means my Blog-handle probably should be “RCLscribe,” but somehow it just doesn’t have the same ring.

And who knows?  By consulting this blog – and reading the Bible yourself “for clues” – you might end up solving your own life’s fascinating detective story, like Sean Connery. The upper image is courtesy of New Parson’s Handbook: Two Ways of Praying: Psalms and Daily Prayer, which added, “the Daily Office or Liturgy of the Hours (Morning and Evening Prayer, for most Anglicans) has itself a rich and varied tradition, and its celebration can take varied forms.”   The article gave even more reasons why the Psalms are essential to daily prayer, and spiritual growth.

The canonical hours image is courtesy of Wikipedia.  The caption:  “The Anglican Rosary sitting atop The Anglican Breviary and The Book of Common Prayer.”

The crucifixion image is courtesy of that Wikipedia article.  The caption:  “Poster showing a German soldier nailing a US soldier to a tree, as American soldiers come to his rescue.  Published in Manila by Bureau of Printing (1917).”  In other words it’s an update on the “crucifixion” theme.

The lower image is courtesy of The Name of the Rose (film) – Wikipedia, the free encyclopedia.  See also The Name of the Rose – Wikipedia, which referred to “the first novel by Italian author Umberto Eco.  It is a historical murder mystery set in an Italian monastery in the year 1327.”  The book revolves around the canonical hours during the visit by “Franciscan friar William of Baskerville and his novice Adso of Melk,” to a “Benedictine monastery in Northern Italy to attend a theological disputation.”

As to the simplification of that complicated and – for “ordinary” and/or working people – unworkable system of canonical hours, see Intro to Prayer Book | The Daily Office, which once said:

Cranmer and the English Reformers were committed to:   1. Bringing the complicated and extensive prayer system out of the monasteries and convents to the common people, and   2. Necessarily, simplifying it all and putting it in their common language.  This meant Morning and Evening Prayer and the Eucharist would accessible to all who could read.

(Emphasis added.)  In other words, from 1549 on, reading and interpreting the Bible was no longer the exclusive province of the clergy, with “ordinary people” having to depend on such “rehashes.”

Because of the importance of the Daily Office in the Anglican tradition … these volumes will make the Offices easier to recite [sic], aiding the use of the Office for private or public prayers.  [They] eliminate the need to find three readings for each day in the Bible and to track down those readings which skip around within a given passage.   DOR should make it more possible for the laity and clergy alike to develop the habit of reciting [sic] the Offices by eliminating much of the work involved.  They are also invaluable for those who are traveling.

Note the word sic, “inserted immediately after a quoted word or passage, indicates that the quoted matter has been transcribed exactly as found in the source text, complete with any erroneous or archaic spelling, surprising assertion, faulty reasoning, or other matter that might otherwise be taken as an error of transcription.”  Sic – Wikipedia.

In this case the “sic” refers to the word recite, which in turn normally refers to the act of “reciting from memory, or a formal reading of verse before an audience.” See definition of recitation by The Free Dictionary.  But as used in the Divine Offices, “recite” seems to be a term of art:

[T]he canonical hours stemmed from Jewish prayer.  During the Babylonian Exile, when the Temple was no longer in use, the first synagogues were established, and the services (at fixed hours of the day) of Torah readings, psalms, and hymns began to evolve.  This “sacrifice of praise” began to be substituted for the sacrifices of animals…   When praying the Hours privately it is not a requirement to ‘sing’ a hymn.  You may simply pray
the verses provided.

See How to Pray the Office (emphasis added), and also More on the Divine Office: Private Recitation by the Laity.  Or you could just Google “reciting the daily office” for other sources, the gist of which seems to be that you can simply “read” the Office, as for example from the volume shown below:

For yet another take see How to Pray the Daily Office from the Book of Common Prayer, and also note The Daily Office – Mars Hill Bible Church:  “The Daily Office is a set rhythm of reading the Scriptures, singing, and prayer.  Sometimes called the Liturgy of the Hours, it originally developed when early Christians continued the Jewish practice of reciting prayers and songs at certain hours.  Priests, monks, and followers of Jesus the world over observe the Daily Office, even today.”

In sum, you don’t have to “sing” or recite; you can just read…