Jesus, sharing the “Bread of Life” at Emmaus – as discussed in the Gospel for August 9…

For more on expanding your mind and horizons, see the Introduction.

The theme?  Taking the Bible literally is a good place to start.  But to be all you can be  –  on this earthly pilgrimage  –  you need to explore “the mystical side of Bible reading.*”

Or see Some basics, on the Three Great Promises of Jesus:  1) He’ll accept anyone who comes to Him;  2) He wants us to live abundantly; and  3) He wants us do greater miracles than He did.

There’s more on the Bible readings for August 9 below.  But first, here’s an update:

I talked about David and Bathsheba – and how they “met” – in the readings for July 26.  She was married at the time – to Uriah the Hittite – when David secretly watched her taking a bath “in the altogether.”  To make a long story short, he got her pregnant.

Then he tried to cover it up by bringing Uriah back from the battle-front and inviting him to sleep with Bathsheba.  (So Uriah would think the baby was his.)  When all that didn’t work, David basically had Uriah killed in battle, but managed to make it look like an accident.

In the OT reading for August 3, the “stuff hit the fan.”  (See 2 Samuel 11:26-12:13a.)  First, Bathsheba heard that Uriah had been killed in battle, and not much later she became David’s wife and “bore him a son.”  But God wasn’t too happy about it, and so sent His prophet Nathan.

Nathan told David a story about a “little ewe lamb,” and how it got stolen by some “fat cat” (as illustrated at right).  But Nathan didn’t name the Fat cat.  Then David got all bent out of shape and said the man deserved to die.  That’s when Nathan told David, “You are the Fat cat!”  (A loose translation.)   Nathan then described what would happen next.

First, “the sword shall never depart from your house.”  That meant David would undergo nothing but trouble for the rest of his life.  Also, God said (through Nathan), “I will take your wives before your eyes, and give them to your neighbor, and he shall lie with your wives,” in public.  (All of which came to pass, by the way.)  The August 3 reading ended with David confessing: “I have sinned against the LORD.”

And incidentally, the psalm for August 3 was Psalm 51:1-13.  As noted in Readings for July 26, David wrote it after – and because of – this incident involving Bathsheba and Uriah.  In turn Psalm 51 is widely recognized as “one of the best-known and most often read penitential texts” in the Bible:  “David threw himself on the mercy of God after committing adultery and murder…  His two-fold repentance provides a model that we should follow.”

Moving right along, that brings us to the Bible readings for Sunday, August 9.  (See Eleventh Sunday after Pentecost – Proper 14.)  The Old Testament reading – 2d Samuel 18:5-9, 15, 31-33 – tells about the death of Absalom, David’s third and favorite son.

Unfortunately, the Lectionary readings went from the beginning of Chapter 12 to the beginning of Chapter 18 in the Second Book of Samuel.  In doing so they skipped over a lot of juicy stuff, like incest, rape and murder.  Basically, David’s oldest son raped his half-sister, who happened to be the full sister of Absalom.  Absalom was David’s third and favorite son.  But in the course of some revenge killings and other mayhem, Absalom ended up leading a revolt against David – his father – and ultimately forcing him to flee the capital, Jerusalem:

After [Absalom’s] full sister Tamar was raped by Amnon, their half-brother and David’s eldest son, Absalom waited two years and avenged her by sending his servants to murder Amnon at a feast after he was drunk…  (2 Samuel 13).

To go over some of the other skipped materal, 2d Samuel 15 tells about the beginning of Absalom’s revolt.  And among other things, 2d Samuel 16 tells about Absalom taking over David’s palace and “sleeping with” his concubines.”

This fulfilled Nathan’s prophecy: “they pitched a tent for Absalom on the [palace] roof, and he slept with his father’s concubines in the sight of all Israel.” ( 2 Samuel 16:22.) 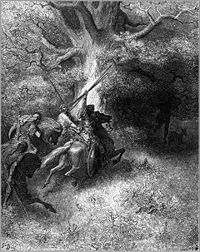 But Absalom was eventually killed in battle, despite David’s orders that he not be harmed.  The death of Absalom is shown at left, courtesy of Absalom – Wikipedia.  This happened at the battle “in the Wood of Ephraim,” as father and son struggled for supremacy over Israel.  But again, despite his son’s revolting against him, David ordered his troops to “deal gently with the young man Absalom.”  (The troops were led by the same  Joab who carried out David’s orders to have Uriah put out front in battle, “where the fighting is fiercest.  Then withdraw from him so he will be struck down and die.”  2d Samuel 11:15.)

So, here’s what happened after the battle started turning against Absalom:

Absalom happened to meet the servants of David…  [He] was riding on his mule, and the mule went under the thick branches of a great oak.  His head caught fast in the oak, and he was left hanging between heaven and earth, while the mule that was under him went on.  And ten young men, Joab’s armor-bearers, surrounded Absalom and struck him, and killed him.

All of which brings us up to speed for the Old Testament Bible readings leading up to August 9.  And incidentally, the psalm reading is Psalm 130, discussed in Oscar Wilde and Psalm 130.

And finally, the Gospel for August 9 is John 6:35, 41-51, which includes the Bread of Life Discourse.  The reading begins with Jesus saying “to the people, ‘I am the bread of life.  Whoever comes to me will never be hungry, and whoever believes in me will never be thirsty.'”

Unfortunately, this selected reading skips over what I consider the most important passage in the Bible.  That’s John 6:37, where Jesus promises He will never turn away anyone who comes to Him.  (See also Some basics.)   The skipped-over parts include Jesus saying He came down from Heaven to do the job God sent Him to do, including “my Father’s will is that everyone who looks to the Son and believes in him shall have eternal life, and I will raise them up at the last day.”

So anyway, the reading picks up where people start complaining, for reasons including that they knew Jesus.  “Is not this Jesus, the son of Joseph, whose father and mother we know?  How can he now say, `I have come down from heaven?'”  Nevertheless, Jesus continues:  “I am the living bread that came down from heaven.  Whoever eats of this bread will live forever:”

In the Christological context, the use of the Bread of Life title is similar to the Light of the World title in John 8:12 where Jesus states: “I am the light of the world: he who follows me shall not walk in darkness, but shall have the light of life.”  These assertions build on the Christological theme of John 5:26 where Jesus claims to possess life just as the Father does and provide it to those who follow him.

And part of that “light of life” or “bread of life” approach is to know how to process anger and/or misunderstandings.  As discussed in FaithGateway, ” One approach you might want to try is reading Proverbs 14:29 out loud three times (or ten, if necessary):  ‘People with understanding control their anger; a hot temper shows great foolishness.'” 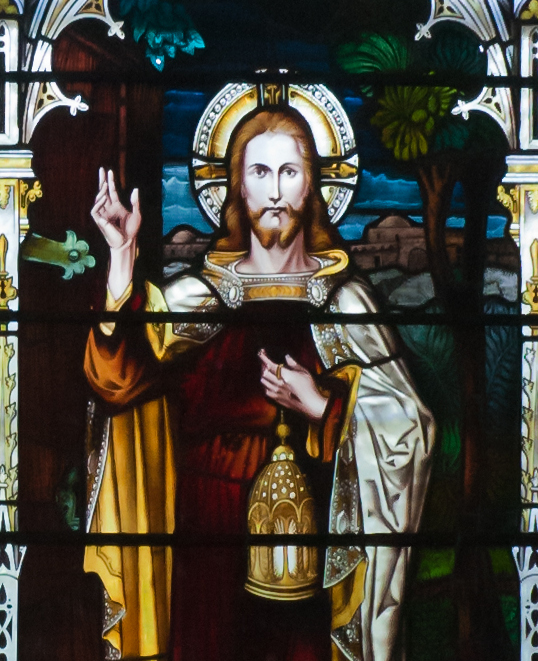 Jesus – the Light of the World…

The upper image is courtesy of  Road to Emmaus appearance – Wikipedia, the free encyclopedia.  (In the “Gallery of Art” at the bottom of the article, under Abraham Bloemaert.)  See also File: Abraham Bloemaert – The Emmaus Disciples.  Bloemaert (1566-1651) was a Dutch painter, printmaker, etcher and engraver.  He was a “Haarlem Mannerist,” starting around 585, but changed styles at the turn of the century (1600). He specialized in history subjects and also taught.  (Training most of the “Utrecht Caravaggisti.”)  He did Emmaus Disciples in 1622.

Re:  “all that you can be.”  See Slogans of the United States Army – Wikipedia, re: the recruiting slogan from 1980 to 2001. The image at left is courtesy of http://www.toywonders.com/productcart/pc/catalog/aw30.jpg.

*  Re: “mystical.”  As originally used, the term mysticism “referred to the Biblical liturgical, spiritual, and contemplative dimensions of early and medieval Christianity.”  See Mysticism – Wikipedia, the free encyclopedia, and also the post On originalism.  See also On the Bible and mysticism.

The lower image is courtesy of Light of the World – Wikipedia, the free encyclopedia.  The caption:  “Detail on stained glass depicting Jesus: I am the light of the world, Bantry, Ireland.”