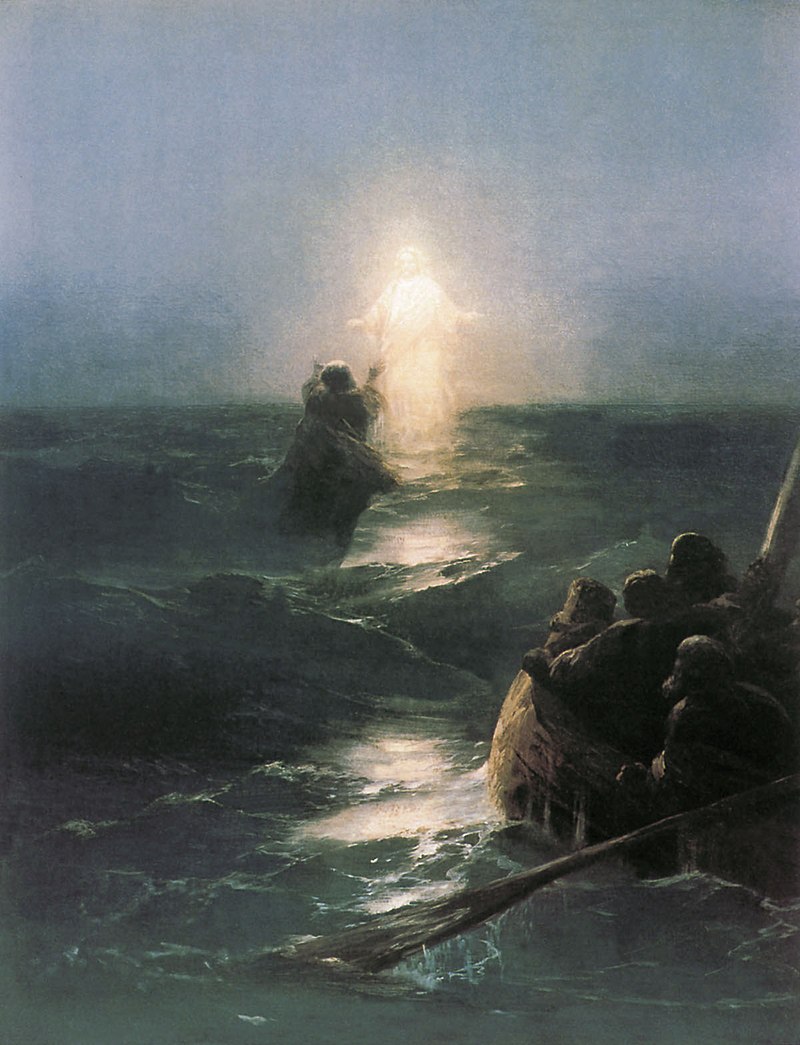 Peter, the one Disciple who actually left the boat and walked on water – for awhile anyway… 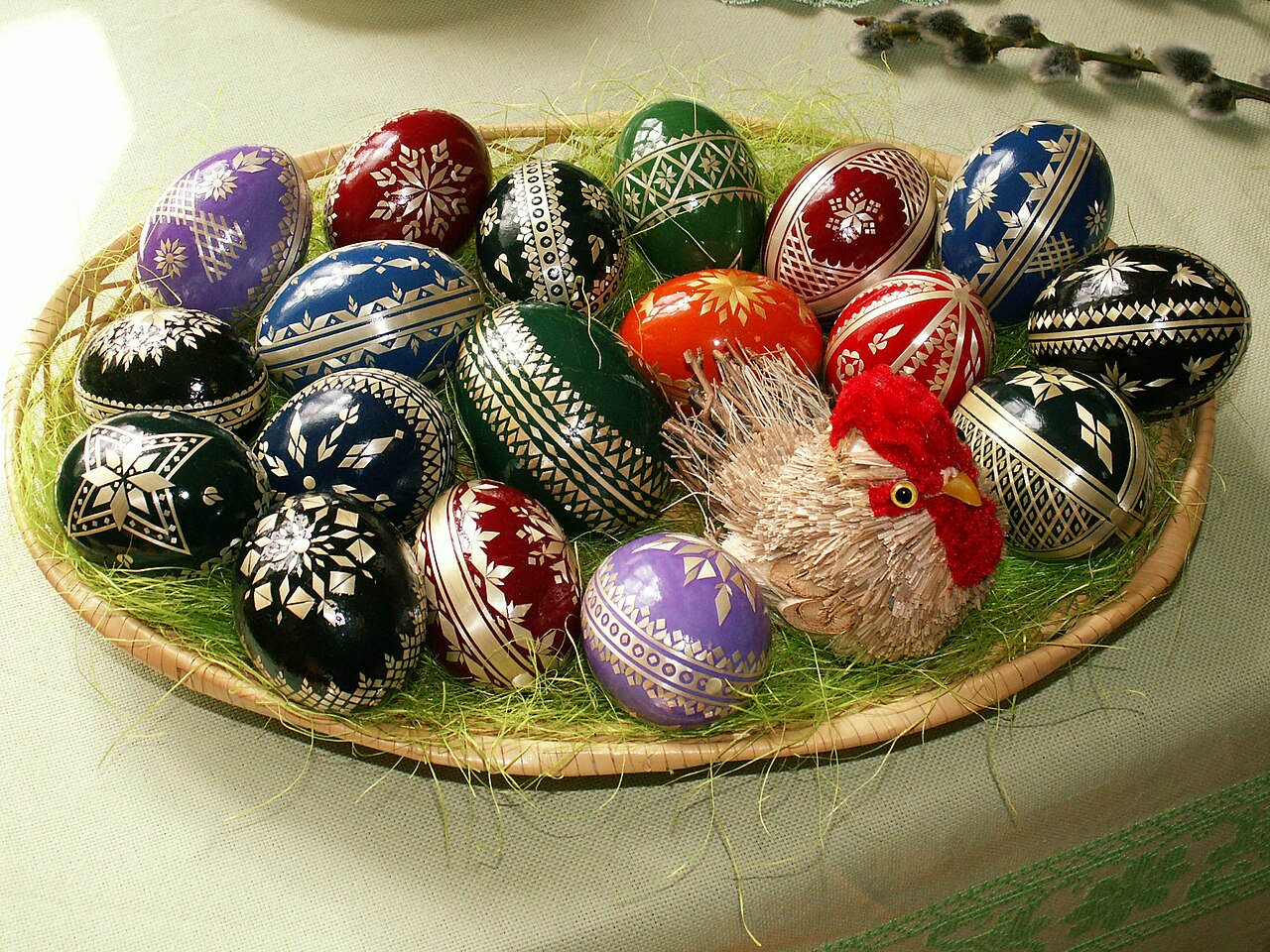 We’re now in the “Week of the Second Sunday of Easter (April 28 – May 4).”  Which makes this a good time to review Easter – the Sunday and the 50-day Season – along with “Doubting Thomas Sunday.”  That’s the Sunday that always follows Easter Sunday itself.

I’ll write more on those topics below, but first let’s get to that “MET-a-phor.”  (Alluding to a line from the musical “The Book Of Mormon.*”)  This metaphor is about Peter, walking on water – and thus taking the “Spiritual Path” rather than the safer, easier but less-rewarding Literal Christian Path.

As noted in If I Forget Thee, Oh Jerusalem:  One frequent, ongoing theme of this post is that the Spiritual path has more to offer than the Literal path.  (After noting a quote on “spirituality and mysticism,” and how it explains why devout people of many religions are drawn to Jerusalem.)

In the notes of that post I added some explanation.  For one thing I cited John 4:24:  “God is spirit, and his worshipers must worship in the Spirit and in truth.”  And I noted Ellicott’s Commentary for English Readers, which in turn noted of God, that “His will has been expressed in the seeking.  But His very nature and essence is spirit, and it follows from this that all true worship must be spiritual.”  And finally, I cited 2d Corinthians 3:6, which says that following only the letter of the law kills, but following the Spirit of God’s law “gives life.”

Which leads to the original title of this post, “On Literal versus Spiritual Christians.” 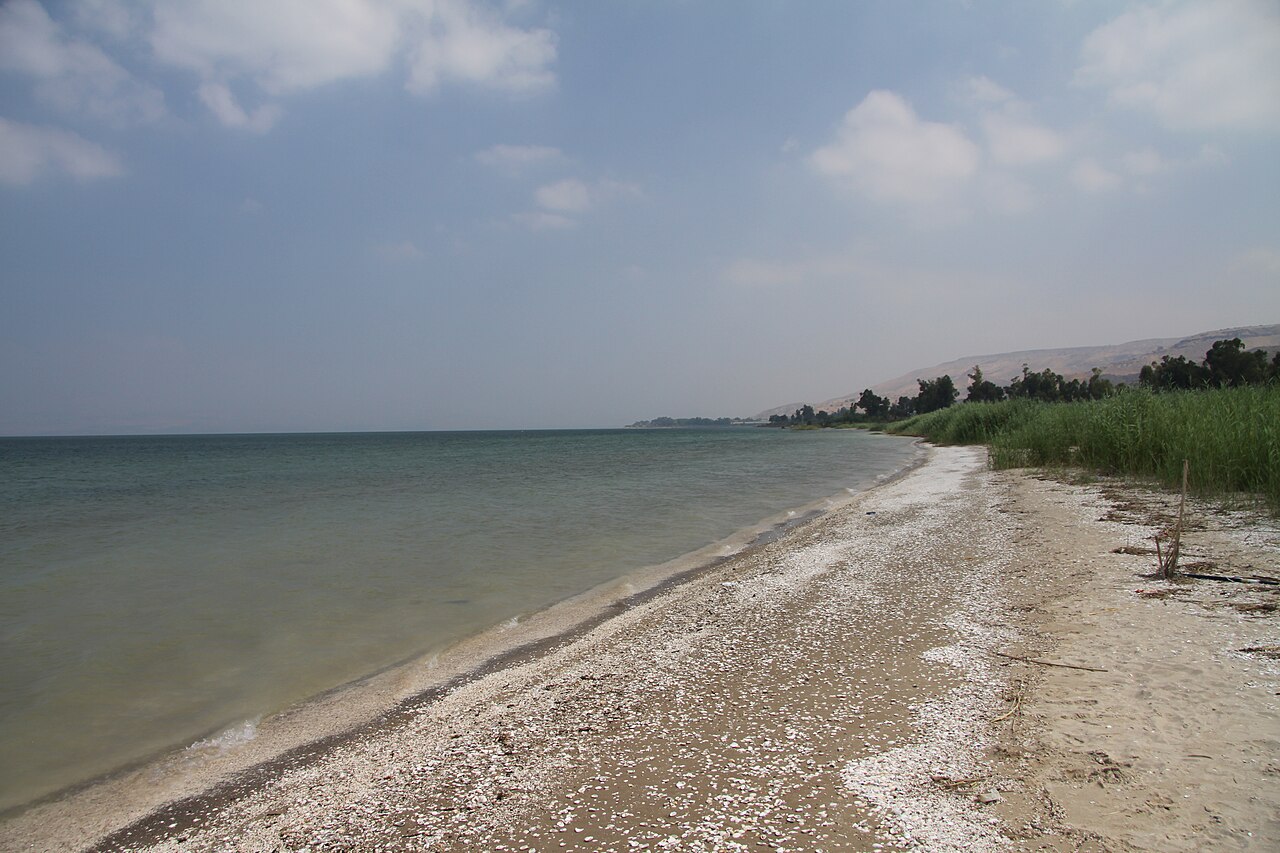 To make a long story short, it seems to me that Peter walking on the water is a prime example of one Christian – out of ten – taking the more-difficult “spiritual path.”  The other nine or so “conservatives” took the safer, the easier, the more literalist path of following Jesus.  (The image at right shows the beach of the Sea of Galilee, near where Jesus – and Peter – “walked.”)

The gist of the story comes from Matthew 14, and the high point comes at Matthew 14:29.  Beginning back at verse 25, Jesus told the Disciples to go on ahead in a boat, while He went up to a mountain to pray.  The He – Jesus – “went out to them, walking on the lake,” which terrified them; they thought Jesus was a ghost.  Jesus told them not to worry, leading Peter to say that if it was Jesus, “tell me to come to you on the water.”

That led Jesus to say, “You of little faith … why did you doubt?”  But it seems to me that Peter was pretty brave in just getting out of the boat in the first place.  It is true that he eventually started to sink, but for “one brief shining moment” he – Peter – actually walked on water.  And as far as we know, he – along with Jesus – was the only person in history to do so.

Which points out a big difference between the Spiritual Path of Christianity, compared with the Literal path followed by some 90% or more of Christians.  Again, it’s true that Peter “fell flat on his face” – at least metaphorically – but at least he took the chance.  And as a result of taking that chance – of exploring his full potential – Peter’s faith grew in ways that the other disciples – who followed the safe path and stayed in the boat – could never experience.

In fact his faith grew so much that he became Primus inter pares.  (“First among equals.”)  Note also the following from Wikipedia, where Jesus advised those who followed Him from Capernaum, “not to seek earthly gains, but aim for a life based on higher spiritual values.”

Which is pretty much the path advocated by this blog.  That is, not being bound by the only-literalist path of following Jesus, but trying to go beyond the merely literal and on to the “higher spiritual values.”

I’ll be writing more on this “metaphor,” but in the meantime let’s review the past week or so.  I’ve done past posts on Easter – listed in the notes – but for this post I’ll focus on “Doubting Thomas Sunday” – 2017.  That post noted that this “Second Sunday of Easter” could be called the “Sunday of Many Names.”  Among those names are Low Sunday, the Octave of Easter, and “Quasimodo Sunday.”  (But not because of Quasimodo, aka the “Hunchback of Notre Dame.”  See the notes.)  But the main question raised by “Doubting Thomas Sunday” is – in plain words – “How do we as Christians deal with our doubts?”

Generally speaking a doubting Thomas is “a skeptic who refuses to believe without direct personal experience.”  Or it can refer to a mere “habitually doubtful person.”  But being such a “doubting person” can actually strengthen your faith.

On the one hand those boot-camp Christians – who take the conservative, literal path – say the answer is simple:  You shouldn’t have any doubts.  In other words, you must “blindly believe.” But for the rest of us there’s another answer, ultimately providing a stronger Christian faith:

Remember Thomas, the disciple, who wouldn’t believe in Christ’s resurrection until he put his hand into Jesus’s wounds.  He went on to die spreading the gospel in Persia and India.  God gave us free choice, He doesn’t want us to be robots, He could have made us like that, but wanted us to choose for ourselves.  You learn and grow by questioning. (E.A.)

And by doing that you’ll probably end up – spiritually anyway – more like the kindly, gentle, learned disciple shown in the painting below.  (A view of St. Thomas by Peter Paul Rubens.)  And that’s the kind of disciple who could convert people to Christianity – like Thomas went on to do – even in a continent made up of Hindus and Muslims.  (India, where Thomas went to proselytize.)  So Thomas went to India – an otherwise unfertile continent for conversion – yet which to this day “still boasts a large native population calling themselves ‘Christians of St. Thomas.’” The upper image is courtesy of Jesus walking on water – Wikipedia.  The caption: “‘Jesus walks on water,’ by Ivan Aivazovsky (1888).”

The Easter egg image is courtesy of Wikipedia.  The  caption:  “Easter eggs, a symbol of the empty tomb, are a popular cultural symbol of Easter.”

Re:  The “Week of the Second Sunday of Easter (April 28 – May 4).”  For the Daily Office readings, click on NRSV or RSV, for the “New Revised” or the “Revised” translations of the Bible.

Again, some text and images were gleaned from Jesus walking on water – Wikipedia.  As to “how many,” we don’t know for sure how many disciples were in the boat with Peter.  (See How many disciples were in the boat when Jesus walked on water.)  Whatever the number, the ratio of “spiritual versus literal” was very small.  Of the seven, or nine, or 12 disciples, only one – Peter – took the chance, the risk that is part and parcel of the Spiritual Path.  That “other” path is often more frustrating and involves more risk, but it can be far more rewarding than the Literal Path of the vast majority.

The “first among equals” image is courtesy of the Saint Peter link in the Primus inter pares article.  The caption: “‘Saint Peter’ (c. 1468) by Marco Zoppo depicts Peter as an old man holding the Keys of Heaven and a book representing the gospel.”  The article noted that aside from Peter, the term is “typically used as an honorary title for someone who is formally equal to other members of their group but is accorded unofficial respect, traditionally owing to their seniority in office.”

Past posts on Easter include On Easter Season – AND BEYOND, On Eastertide – and “artistic license,” and Frohliche Ostern – “Happy Easter!”

Re:  Where the name “Quasimodo Sunday” came from:

[T]he name comes from a Latin translation of the beginning of First Peter 2:2 , a traditional “introit” used in churches on this day.  First Peter 2:2 begins – in English and depending on the translation – “As newborn babes, desire the rational milk without guile…”  [Or, “pure spiritual milk, so that by it you may grow up in your salvation.”]  In Latin the verse reads:  “Quasi modo geniti infantes…”    Literally, “quasi modo means ‘as if in [this] manner.’”

thus – since “geniti” translates as “newborn” and the translation of “infantes” seems self-evident – the “quasi modo” in question roughly translates, “As if in the manner” (of newborn babes).

The lower image is courtesy of Peter Paul Rubens: St Thomas – Art and the Bible.