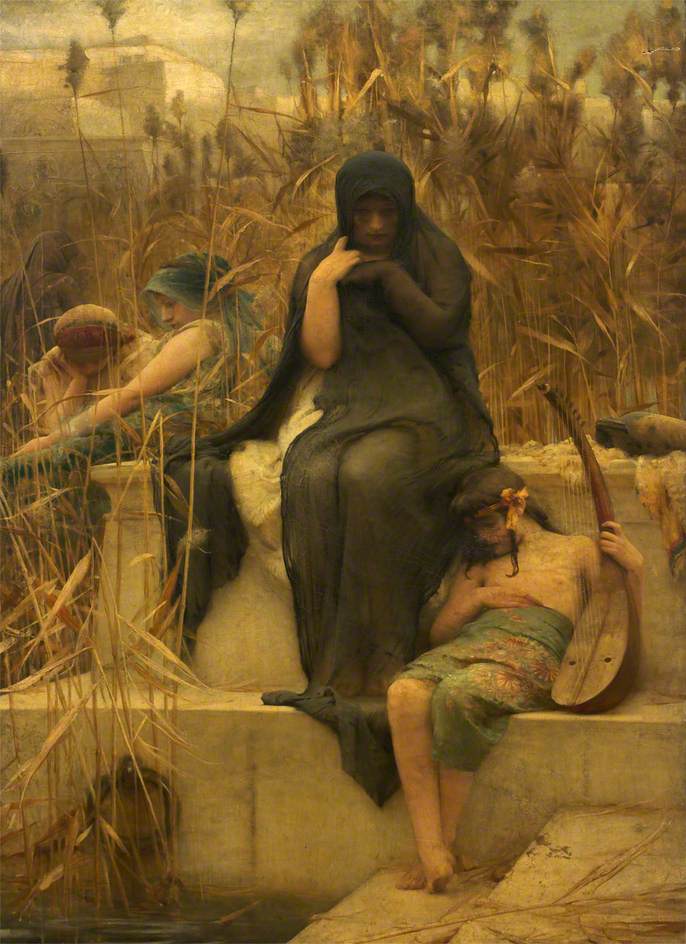 “By the waters of Babylon,” in exile, where a Hebrew Remnant finalized the Old Testament… 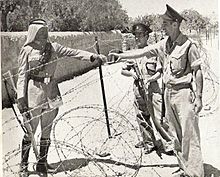 As noted in “On to Jerusalem,” this upcoming May 10th I’ll be flying to Jerusalem for a two-week  pilgrimage.  (As part of a local church group.)  To that end, I’ve been listening to a series of lectures-on-CD, The World of Biblical Israel | The Great Courses Plus.

And in the process of doing this post, I stumbled on a Jerusalem Post article that tied in to a point the professor made in Lecture 2, “By the Rivers of Bablyon – Exile.”  The article:  If I Forget Thee, Oh Jerusalem:

There is an almost natural magnetic draw to Jerusalem that stirs within us a special emotion. For millions of people around the world the heart of ancient Jerusalem, Yerushalayim, symbolizes spirituality and mysticism, a place of prayer and miracles, the centre of the world and a holy portal to God.

Note the “spirituality and mysticism” part, which ties in with frequent themes of this post.  (That the “spiritual path” has more to offer than the “literal path.*”)  But the point here is this:  The title of that article is from Psalm 137:5-6:  “If I forget thee, O Jerusalem, let my right hand forget her cunning.  If I do not remember thee, let my tongue cleave to the roof of my mouth; if I prefer not Jerusalem above my chief joy.”  (That’s from the King James Version; the Bible God uses.)

Which just happened to tie in with the Biblical Israel Lecture 2, described further below.

See also Psalm 137 – Wikipedia, which described “Nebuchadnezzar II‘s successful siege of Jerusalem in 597 BC.”  That ended up with the people of Judah being “deported to Babylonia, where they were held captive until some time after the Fall of Babylon,” in 539 BC:

In English it [Psalm 137] is generally known as “By the rivers of Babylon,” which is how its first words are translated in the King James Version…  The psalm is a communal lament about being in exile after the Babylonian captivity, and yearning for Jerusalem.  The psalm is a regular part of Jewish, Eastern Orthodox, Catholic, Anglican and Protestant liturgies.  It has been set to music often, and was paraphrased in hymns.

According to Professor Chapman, Psalm 137 constitutes both the mid-point – the very middle – of years of Ancient Jewish history, and also the very middle of Bible itself.*  And Psalm 137 came at precisely the time when the books of the Hebrew Bible – the Old Testament – were collected, edited and redacted.  And it all came about because of the Exile, that “national disgrace.”

That is, the Old Testament as we know it didn’t exist before 586 B.C., the year many Judeans were taken from their homeland.  (After the horrors of the Babylonian conquest.)  Then they went through a “death march,” 800 miles to Babylon, during which many of the Remnant died along the way.  (Those who weren’t executed during the post-siege “mop up.”)  After those horrors – and the shame of this national disgrace – they compiled, edited and shaped their collected national stories into a “virtual library.”  A library that connected them to their homeland.

In other words, before the calamity of the Exile, many books (in the form of scrolls) existed, but “here is where they were first collected into what we know as the Old Testament today.”

That idea was mirrored in Babylon captivity, at Psalm 137 – Wikipedia:

This period saw … the emergence of the central role of the Torah in Jewish life.  According to many historical-critical scholars, the Torah was redacted during this time, and began to be regarded as the authoritative text for Jews.  This period saw their transformation into an ethno-religious group who could survive without a central Temple.

The link-article went on to say the period of exile “was a rich one for Hebrew literature.”  For example, the Book of Jeremiah 39–43 saw the exile “as a lost opportunity.”  Also, the “Priestly source, one of the four main sources of the Torah/Pentateuch in the Bible, is primarily a product of the post-exilic period,” while also “during this Persian period, the final redaction of the Pentateuch purportedly took place.”

I’ve written before about Moses writing the Torah – the first five books of the Bible – during and right after the 40 years of “wandering in the wilderness.”  (See e.g. On Moses and Paul “dumbing it down,” and My Lenten meditation.)  Which would mean those first five books of the Bible were written some time before 1,400 B.C., about the time Moses died. (What year did Moses die – answers.com.)  But it was only some 800 years later – and the product of a humiliating national disgrace – that the final version of the Old Testament as we know it came into being.

I’ll be writing more about Psalm 137 and “On to Jerusalem” in a later post.  In the meantime, here’s wishing you a happy Easter.  And a reminder that that joyous occasion could only come about after 40 days of Lenten “doing penance, mortifying the flesh, repentance of sins, almsgiving, and denial of ego.”  Not to mention a humiliating death on the cross.

You know, I’ll bet there’s a lesson that can be gleaned from all this… 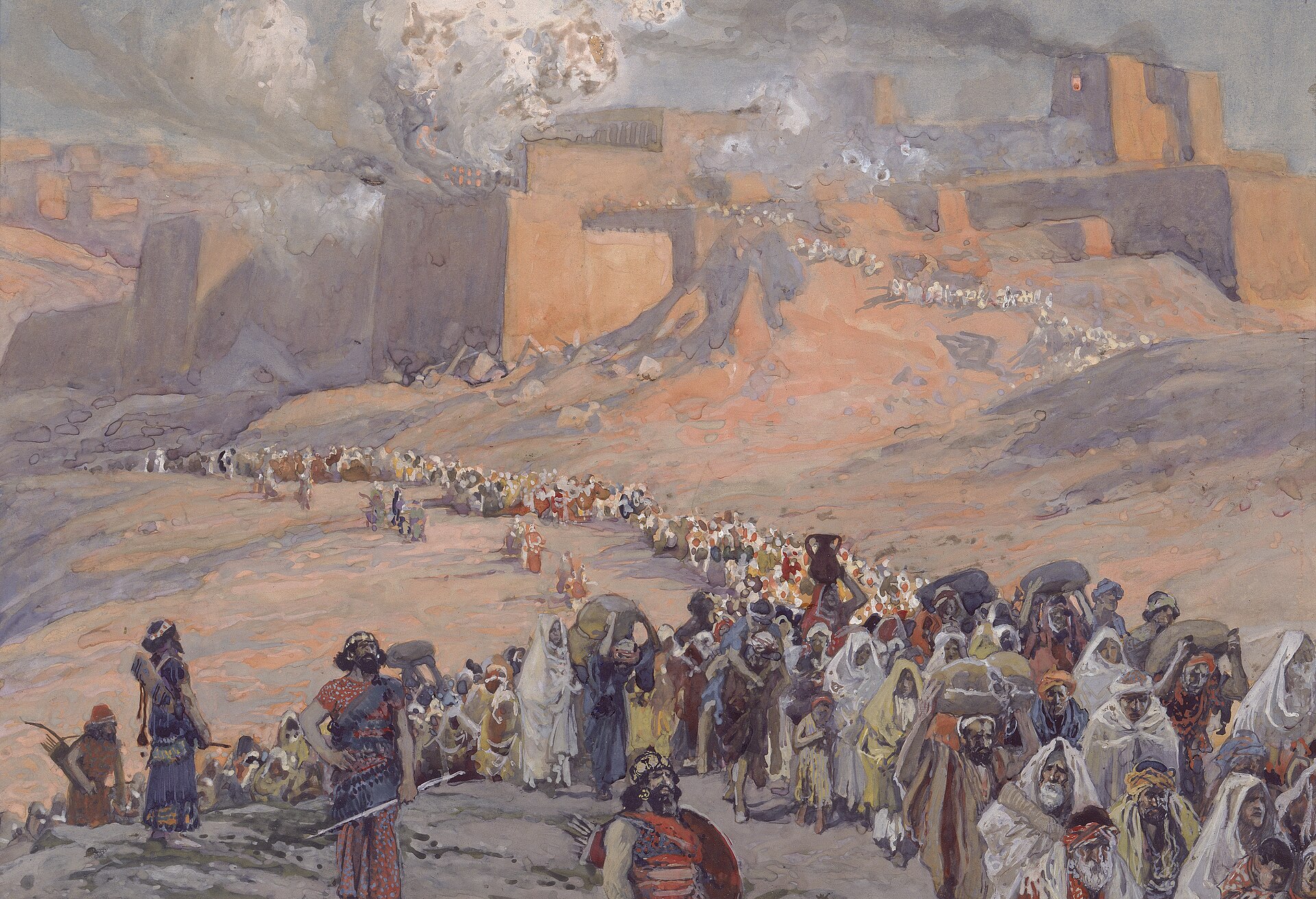 James Tissot, “The Flight of the Prisoners,” from Jerusalem and on into exile…

The upper image is courtesy of Psalm 137 – Wikipedia.  The full caption: “By the Waters of Babylon, painting by Arthur Hacker, c. 1888.”

About the photo to the right of the paragraph beginning, “As told in ‘On to Jerusalem:'”  From the Wikipedia article on Jerusalem, the caption reads:  “Israeli policemen meet a Jordanian Legionnaire near the Mandelbaum Gate (circa 1950).”

As to the “Great Course,” see also The World of Biblical Israel – English.  Other books I’m reading for the upcoming include Entebbe: A Defining Moment In the War On Terrorism, by Iddo Netanyahu.

As to the “piritual path being better than the literal path.  See John 4:24:  “God is spirit, and his worshipers must worship in the Spirit and in truth.”  (See also Ellicott’s Commentary for English Readers, which noted of God that “His will has been expressed in the seeking.  But His very nature and essence is spirit, and it follows from this that all true worship must be spiritual.”)  And of course 2d Corinthians 3:6, saying the letter of the law kills, “but the Spirit [of God’s law] gives life.”

Re:  “Babylon.”  See Wikipedia:  “The remains of the city are in present-day Hillah, Babil Governorate, Iraq, about 85 kilometres (53 mi) south of Baghdad, comprising a large tell of broken mud-brick buildings and debris.”  There’s probably a lesson there too…

About the image to the right of the paragraph, “That idea was mirrored in Babylon captivity.”  From Psalm 137 – Wikipedia, it’s captioned “Psalm 137 in the Eadwine Psalter (12th century).”

The lower image is courtesy of the Babylonian captivity link at Psalm 137 – Wikipedia.  The full caption:  “James Tissot, The Flight of the Prisoners.”  That article added these notes:

In the Hebrew Bible, the captivity in Babylon is presented as a punishment for idolatry and disobedience to Yahweh in a similar way to the presentation of Israelite slavery in Egypt followed by deliverance. The Babylonian Captivity had a number of serious effects on Judaism and Jewish culture.  For example, the current Hebrew alphabet was adopted during this period, replacing the Paleo-Hebrew alphabet.

This period saw the last high-point of biblical prophecy in the person of Ezekiel, followed by the emergence of the central role of the Torah in Jewish life.  According to many historical-critical scholars, the Torah was redacted during this time, and began to be regarded as the authoritative text for Jews.  This period saw their transformation into an ethno-religious group who could survive without a central Temple.

This process coincided with the emergence of scribes and sages as Jewish leaders (see Ezra). Prior to exile, the people of Israel had been organized according to tribe.  Afterwards, they were organized by smaller family groups.  Only the tribe of Levi continued in its temple role after the return.  After this time, there were always sizable numbers of Jews living outside Eretz Israel;  thus, it also marks the beginning of the “Jewish diaspora,…”

On the seventh day of the fifth month, in the nineteenth year of Nebuchadnezzar king of Babylon, Nebuzaradan commander of the imperial guard … came to Jerusalem.  He set fire to the temple of the Lord, the royal palace and all the houses of Jerusalem. Every important building he burned down. The whole Babylonian army under the commander of the imperial guard broke down the walls around Jerusalem.  Nebuzaradan the commander of the guard carried into exile the people who remained in the city, along with the rest of the populace and those who had deserted to the king of Babylon.  But the commander left behind some of the poorest people of the land to work the vineyards and fields.

Also verse 18-20, describing the number of prisoners taken, mostly high-ranking officials.  And verses 20-21:  “Nebuzaradan the commander took them all and brought them to the king of Babylon at Riblah. There at Riblah, in the land of Hamath, the king had them executed.”