In writing his Letter to the Romans, the Apostle Paul – like Moses – “had to really dumb it down…”

I should note first that Friday March 25 was the Feast of the “Annunciation.”  That celebrates the day – nine months before Christmas – that the Virgin Mary “would conceive and become the mother of Jesus.”  (See last year’s Annunciation “gets the ball rolling,” and also An Annunciation-Good Friday anamoly, which noted that in 2016 the Annunciation was celebrated on Good Friday; thus the anomaly, an “odd, peculiar, orstrange condition, situation, quality, etc.”) 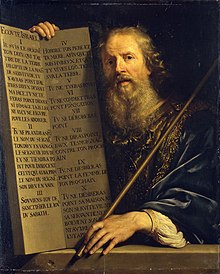 I ended the last post by observing that when he wrote the first five books of the Bible, Moses – at right – had to really dumb it down.

In plain words, when he wrote the Torah Moses was forced by circumstances “to use language and concepts that his ‘relatively-pea-brained contemporary audience’ could understand.’”

Moses was addressing an audience of the largely “unwashed” … illiterate men and women who had been trained since birth to be “mindless, docile slaves…”  Suppose Moses had mentioned dinosaurs in his writings.  Or how “we” revolve around that “big bright thing in the sky.”  The result would have been similar to what nearly happened [in] Exodus 17:4, “Moses cried out to the LORD, ‘What should I do with these people?  They are ready to stone me!’”

(See My “pain in the back.”)  Which is one good reason why Moses wouldn’t have mentioned dinosaurs, or said things like “the earth we live on actually revolves around that ‘big bright thing in the sky.'”  If he had told his contemporary audience such things he would have gotten stoned, burned at the stake or worse.  (See On Moses getting stoned.)

Which is no mean trick.

And which brings up one main theme of this blog:  That reading the Bible means operating on at least two different planes.  The first is the literal plane, the literal story of Jesus – which is so simple that even a child can understand it.  But understanding the second plane requires more thought, more persistence, more work – and having more of an open mind.

Which is another way of saying that no one can ever know all there is to know about the Bible.

There will always be more to learn…

Which is pretty much the point the Apostle Paul – seen at right – was trying to make in Romans 6:19.  (From one of the Daily Office Readings for Saturday, March 25.)  In the New International Version the passage reads:  “I am using an example from everyday life because of your human limitations.”  In the International Standard Version:  “I am speaking in simple terms because of the frailty of your human nature.”

But either way you translate the passage, the point is that Paul – like Moses – “had to really dumb it down.”  But that was also pretty much the point of Isaiah 55:8-9:

Then too, Paul made pretty much the same point in Galatians 4:21-5:1, one of today’s New Testament Daily Office Readings.  Specifically, in Galatians 4:24 he used an allegory.  (The image at left shows a “Christian allegorical map of The Journey of Life.”)

Now this is an allegory:  these women are two covenants.  One woman, in fact, is Hagar, from Mount Sinai, bearing children for slavery…  But the other woman [“Sarai,” or Sarah, the wife of Abraham] corresponds to the Jerusalem above;  she is free, and she is our mother.

See also the GOD’S WORD® Translation of Galatians 4:24, which has Paul saying, “I’m going to use these historical events as an illustration.  The women illustrate two arrangements.”

Which – you could say – is what the Bible does on a regular basis:  Use “historical events as an illustration.”  And then of course there’s the end of John’s Gospel, John 21:25:  “Now there are also many other things that Jesus did.  Were every one of them to be written, I suppose that the world itself could not contain the books that would be written.”

Or as it says in the Matthew Henry Commentary for John 21:25:

Only a small part of the actions of Jesus had been written…  Enough is recorded to direct our faith, and regulate our practice…  We may, however, look forward to the joy we shall receive in heaven, from a more complete knowledge of all Jesus did and said, as well as of the conduct of his providence and grace in his dealings with each of us.

Which seems to be a fact that many Biblical literalists seem to overlook.  You begin your process of Bible-reading and study by “learning the fundamentals.”  But then – after your spiritual boot camp – you’ll want to move on to more Advanced Individual Training, as noted below.  That way – using an open-minded approach – you can get a head start on gaining a “more complete knowledge” of all that Jesus did and said, as well as a knowledge of the whole Bible itself.

And which brings up one final point for today:

“It was never ‘contrary to Scripture’ that the earth revolved around the sun.  It was only contrary to a narrow-minded, pigheaded, too-literal reading of the Scripture…”

Galileo facing the Inquisition, for saying the earth revolved around the sun…

The upper image is courtesy of the Wikipedia article on the Apostle Paul.  The caption:  “‘Paul Writing His Epistles,’ painting attributed to Valentin de Boulogne, 17th century.”

The Kenneth Clark paraphrase is from the hardcover book version of Clark’s Civilisation (TV series). On pages 84-85 of the book, Clark compared the poet Dante with the painter Giotto.  Then on page 85, Clark noted the differences between the two men, beginning with the fact that “their imaginations moved on very different planes.”  But in the film version – and only in the film or TV version – Clark said Dante had  “that heroic contempt for baseness that was to come again in Michelangelo.   Above all, that vision of a heavenly order and the intellectual power to make it comprehensible.”  Which is the phrase that drew my attention…  See also Wikipedia, for more on the TV series.

The “allegory” image is courtesy of Wikipedia’s Allegorical interpretation of the Bible, referring to the:

…interpretive method (exegesis) which assumes that the Bible has various levels of meaning and tends to focus on the spiritual sense (which includes the allegorical sense, the moral (or tropological) sense, and the anagogical sense) as opposed to the literal sense.  It is sometimes referred to as the Quadriga, a reference to the Roman chariot drawn by four horses.

The full caption for the map image reads:  “Christian allegorical map of The Journey of Life, or an Accurate Map of the Roads, Counties, Towns &c. in the Ways to Happiness & Misery, 1775.”

Re:  “Sarai,” or Sarah, the wife of Abraham.  Wikipedia noted that she was “the wife and also the half–sister of Abraham and the mother of Isaac…  According to Genesis 17:15, God ‘changed her name to Sarah as part of a covenant after Hagar bore Abraham his first son, Ishmael.'”

The lower image – “Cristiano Banti‘s 1857 painting Galileo facing the Roman Inquisition” – is from a prior post (The latest from a “None“) and is courtesy of the article, Heresy – Wikipedia:

Note that Galileo almost got burned at the stake – for saying the earth revolved around the sun – almost 3,000 after Moses was trying to lead his people to “the Promised Land…”