Did Moses write the Torah like Saint Mark did – above – in writing the first Gospel?

We’re now well into Lent, which means doing Lenten Disciplines.  For many, that means giving up something.  On the other hand, some people choose to add a discipline “that would add to my spiritual life.”  (See Lenten disciplines: spiritual exercises or ego trip?)

For my part, I’ve always wondered just when, where and how Moses came to write the first five books of the Bible. (The Torah.)  So I’ve decided that – aside from Bible-reading on a daily basis, which I already do anyway – I’ll spend this Lent “meditating” on this topic.

More precisely, I plan to spend this Lent contemplating on how and when Moses wrote those first five books.  And as Wikipedia explained, contemplation means “profound thinking about something.”  Further, “In a religious sense, contemplation is usually a type of prayer or meditation.”  And finally there’s this:

Within Western Christianity contemplation is often related to mysticism as expressed in the works of mystical theologians such as Teresa of Avila and John of the Cross as well as the writings of Margery Kempe, Augustine Baker and Thomas Merton.

So in so “contemplating,” I’d be in pretty good company.

And aside from all that, there’s the matter of “reaching the unreached.”

Put another way, from 1972 to 1985 there was a British sitcom on PBS called “Are You Being Served?”  Which brings up an interesting fact these days.  That fact is that there’s a whole segment of possible converts to Christianity who aren’t being served.

They are the potential Christians who’d like to find out more about the Bible.  However, they don’t want to develop the faith of a narrow-minded pinhead. (Mere rhetoric hyperbole.)

Take for example the sentiment expressed by Gordon Sumner, known to his fans as Sting:

But as noted below, “If your religion makes you ‘certain,’  you’re missing the point!”

The point being, that maybe – just maybe – if I could figure out a common-sense explanation to some of these Biblical mysteries, I might be able to “convert” Sting and others like him…

But getting back to the meditation-contemplation.  The key question is:  “What did Moses know, and when did he know it?”  For example, did Moses know the full story about the “big bright thing in the sky?”

Did Moses know – far in advance of his fellow human beings – that the “earth” revolves around the “sun?”

On the other hand, there’s some pretty good evidence that if Moses did know that, he’d have been well advised not to share that information.  He would have been “well advised” on pain of being stoned to death, for “heresy.”  As it was, on more than one occasion Moses came close to being killed by the very tribe of Habiru he was ostensibly leading.  (See On Moses getting stoned.) 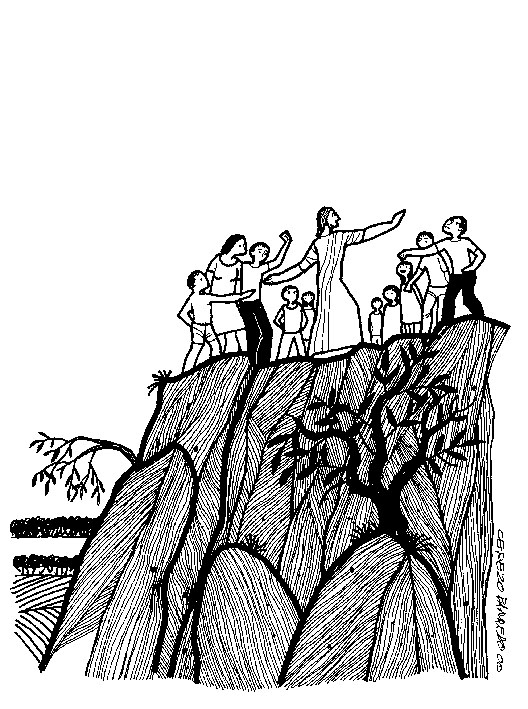 And something like that almost happened to Jesus, in the Gospel reading for the Fourth Sunday after the Epiphany. (That is, last January 31st.)  But in Luke 4:21-30, Jesus wasn’t threatened by stoning, as Moses was.  Instead, “the people” wanted to throw Him off a cliff.

When they heard this, all in the synagogue were filled with rage.  They got up, drove him out of the town, and led him to the brow of the hill on which their town was built, so that they might hurl him off the cliff.  But he passed through  the midst of them and went on his way.

As Wikipedia noted, “Throwing or dropping people from great heights has been used as a form of execution since ancient times.”  And in what may well be overstating the obvious:  “People executed in this way die from injuries caused by hitting the ground at high velocity.”

Another aside: The article noted that in “pre-Roman Sardinia, elderly people who were unable to support themselves were ritually killed.  They were intoxicated with a neurotoxic plant … then dropped from a high rock or beaten to death.”

But we digress…  Getting back to Moses, tradition says he wrote the first five books of the Bible. (The Torah.)  Of those first five books, the last four – Exodus, Leviticus,  the Book of Numbers, and Deuteronomy – are all pretty much autobiography.  Moses wrote about his life, and his role in leading the Hebrews out of slavery and into their Promised Land.  (In doing so he referred to himself in the third person, a literary device called illeism.  See also On Moses and “illeism.”)

But in writing Genesis, Moses had to go back to the origins of time itself.  He had to go back to the Creation of the World itself.   And in doing so, he almost certainly had to rely on oral tradition.   (Referring to “cultural material and tradition transmitted orally from one generation to another.”)  Note also that from Sunday, January 10, up to Saturday, February 6, the Old Testament Daily Office Readings have been from the Book of Genesis. 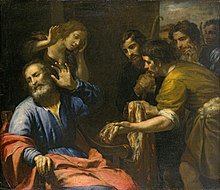 Beyond that, the readings from Genesis resumed on Monday, February 15, with the story of Jacob[:] Father of the 12 Tribes of Israel.  Those OT Daily Office Readings will continue until Wednesday, March 9.  (After that the DOR‘s from the OT will be from the Book of Exodus.)

So the subject of the Book of Genesis – as arguably written by Moses after the fact – is definitely topical.

And for starters, there’s the question whether Moses “wrote” the Torah at all.

On the matter of “Semitic writing,” see History of writing – Wikipedia;

The first pure alphabets … emerged around 1800 BC in Ancient Egypt, as a representation of language developed by Semitic workers in Egypt…  These early abjads remained of marginal importance for several centuries, and it is only towards the end of the Bronze Age that the … Proto-Canaanite was probably somehow influenced by the undeciphered Byblos syllabary, and in turn inspired the Ugaritic alphabet (ca. 1300 BC).

Since Moses apparently lived from about 1392 to 1272 – see Answers.com – writing as we know it was just beginning.  Which is why – it seems – Moses probably had to rely on oral tradition…

Then there’s the question whether Moses actually dictated the Torah to an amanuensis, rather than actually “writing” it himself.  (See On Amanuenses, about Paul and his “person employed to write … what another dictates.”)  Did Moses dictate the first five books of the Bible to another person, in the manner of Peter dictating to Mark?  (And as shown below.) 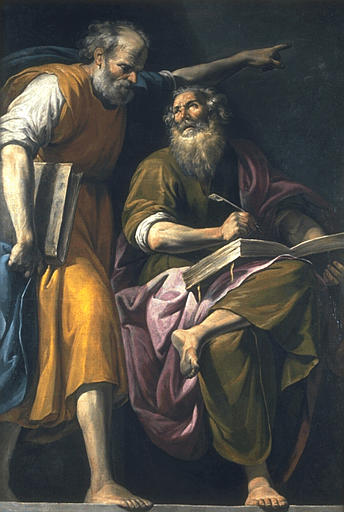 The Apostle Peter dictates to Mark the Evangelist…

The upper image is courtesy of Mark the Evangelist – Wikipedia, the free encyclopedia.  The caption:  “Saint Mark the Evangelist Icon from the royal gates of the central iconostasis of the Kazan Cathedral in Saint Petersburg, 1804.”   The lower image is also from that article:  “Saint Mark writes his Evangelium at the dictation of St. Peter, by Pasquale Ottino, 17th century, Beaux-Arts, Bordeaux.”

Re: “Sting.”  See 10 Questions for Sting – TIME.  And re:  “If your religion makes you ‘certain,’ you’re missing the point!”  See On a dame and a mystic. The comment by Sting exemplifies some common perceptions today:   1) that too many Christians are too close-minded; 2) that too many are way too negative; or 3) that too many think The Faith of the Bible is all about getting you to follow their rules, on pain of you “going to hell.”  (See also my way or the highway – Wiktionary.)

“…what did Moses know, and when did He know it?”  This is one of many phrases – like “Irangate” or “Benghazi-gate” – that can be traced back to the 1972 Watergate scandal.  It can be credited to Senator Howard Baker, who famously asked, “What did the President know and when did he know it?”  The question was originally written by Senator Baker’s counsel and former campaign manager, future U.S. Senator [and Hollywood star], Fred Thompson.  See, wikipedia.org/wiki/Howard_Baker, and firstthings.com/blogs/evangel/2011/04/what-did-jesus-know-and-when-did-he-know-it.

The image to the right of the “when did He know it” paragraph is courtesy of 40 Years Since The Watergate Hearings | Getty Images.  Senator Baker is at left, covering the microphone.  Senator Sam Ervin is at the right of the photo, arms folded.  See also On Jesus as a teenager.

The “cliff” image is courtesy of thatpreacherwoman.blogspot.com/2013/02/a-real-cliffhanger-sermon-that-did-not-go-well.  The article noted that the “people” – the ones Jesus spoke to in Luke 4:21-30 – “hadn’t really grasped the radical reforming he had in mind in order to bring good news to the poor and imprisoned and blind and oppressed.”  In other words they weren’t ready for it yet…

The “Jacob” image is courtesy of Jacob – Wikipedia.  The caption: “Joseph’s Coat Brought to Jacob
by Giovanni Andrea de Ferrari, c. 1640.”  The story of Joseph being thrown into a pit began in the DOR’s for February 15, with his brothers being jealous.  (Gen. 37:1-11.)  On Tuesday, February 16, the brothers throw Joseph into a pit as an alternative to killing him.  (Gen. 37:12-24.)  On Wednesday, February 17, the brothers Joseph’s coat in goat’s blood, then show it to their father, as shown in the Ferrari painting.  From there he went into slavery in Egypt…

Re: “To be continued.”  See Cliffhanger – Wikipedia, which noted that a “cliffhanger is hoped to ensure the audience will return to see how the characters resolve the dilemma.”  See also the image below, courtesy of  Did Back to the Future Originally Not End With ‘To be continued?’