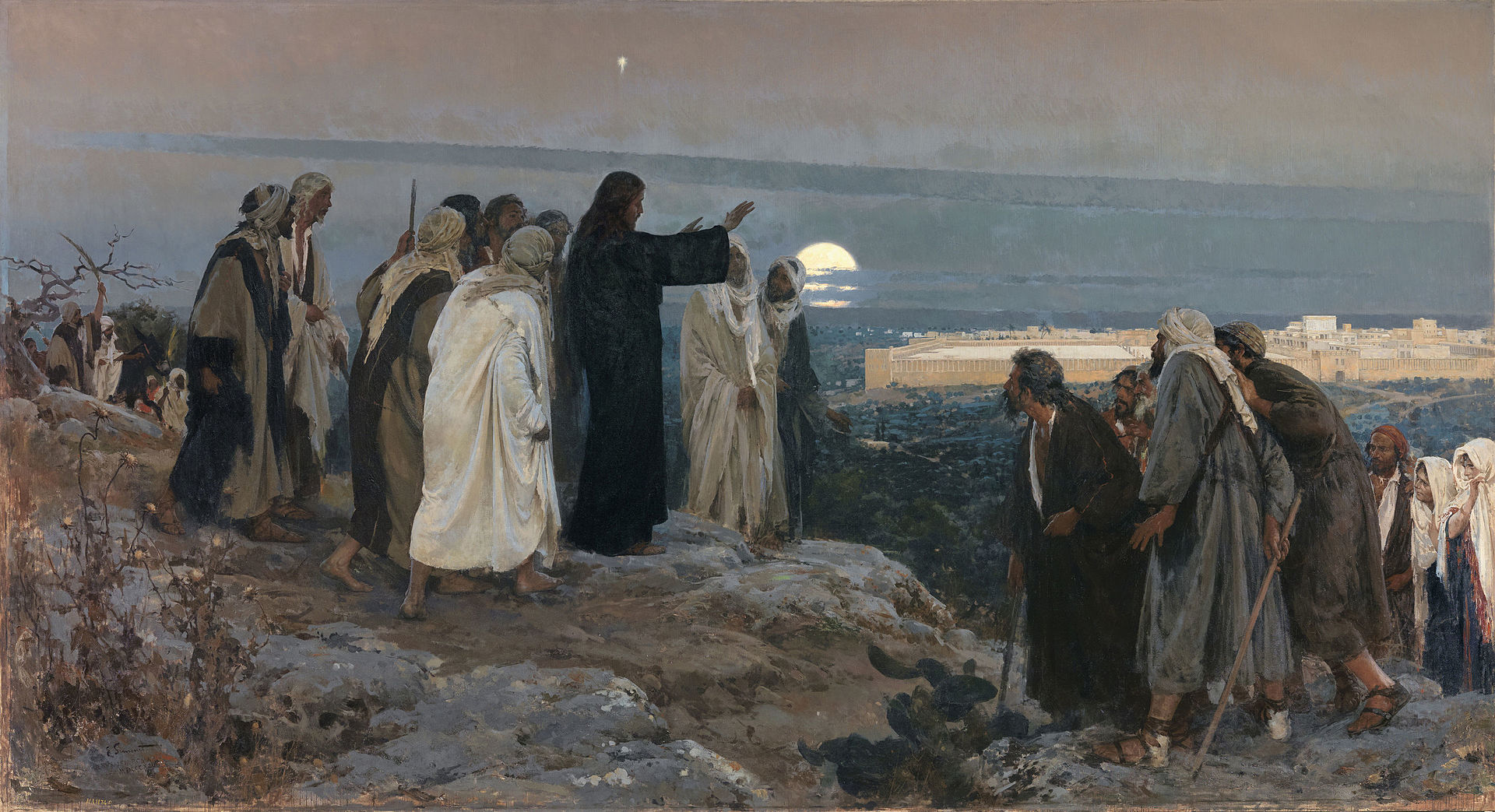 First a note:  That “salvation for all” thing includes the addendum, “who come to Him.”

Back to the main topic:  Palm Sunday is coming up this weekend.  Easter Sunday comes a week later – on April 21 – and with it the end of Lent.  And of my chance to write up – as part of a Lenten discipline – “a reasoned, careful, blog-post treatise on precisely ‘why I don’t like Donald Trump.'”  (As I hoped in last March 15’s On the Bible’s “dynamic tension.”  That is, a logical reatise without the “fallacy of ad hominem attacks,” or my saying to Trump supporters, “What are you, dumbasses?”)

Which definitely would have been the hard part.

But alas, my busy schedule – including preparing for the upcoming “On to Jerusalem” – precluded doing that treatise.  So I’m back to a main theme of this blog, the Daily Office Readings.  For example, the New Testament reading for Tuesday, April 9, Romans 10:1-13.

‘The word is near you, on your lips and in your heart’ (that is, the word of faith that we proclaim);  because if you confess with your lips that Jesus is Lord and believe in your heart that God raised him from the dead, you will be saved.

That first part (Romans 10:8) goes back to Deuteronomy 30:14, where Moses said, “But the word is very near you, in your mouth and in your heart, so that you may obey it.”  Then Romans 10:9 – including the words emphasized – relates back to (for one example) Matthew 10:32:  “Everyone who confesses Me before men, I will also confess him before My Father in heaven.” 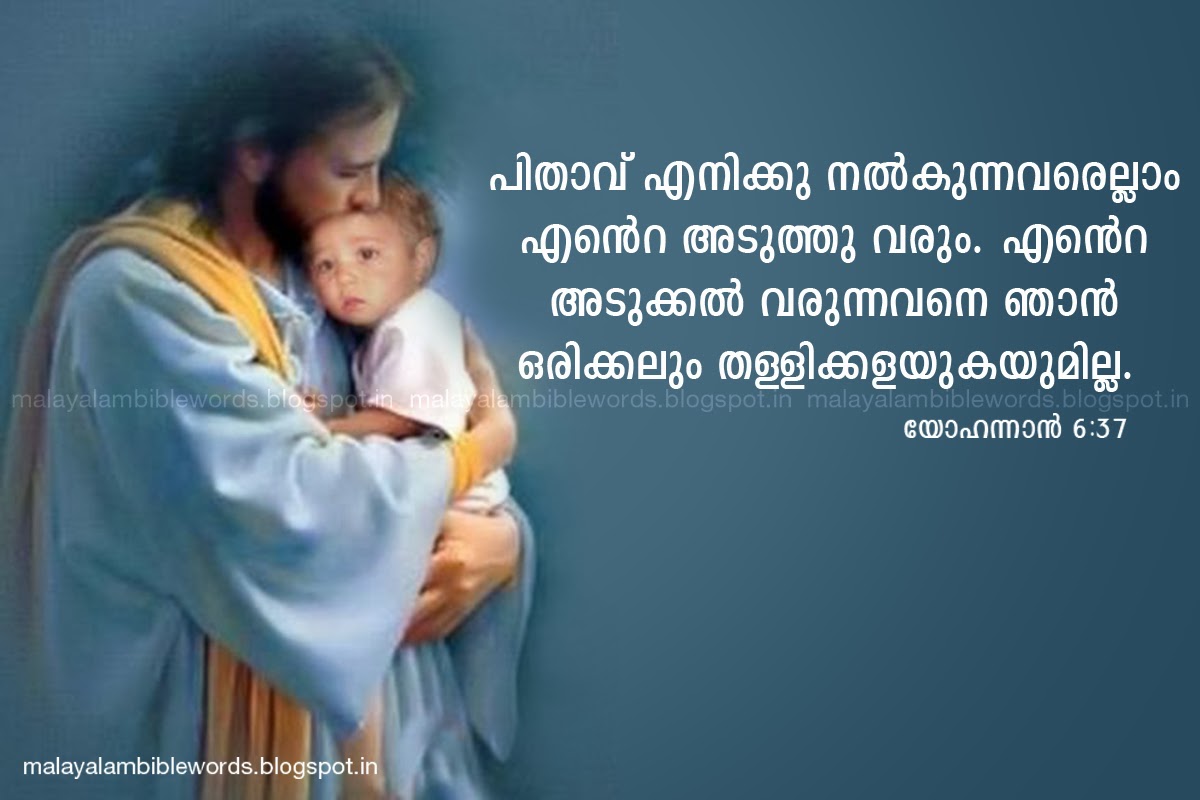 And of course there’s good old John 6:37 – a standard feature of the opening blurb, and as illustrated in “Malayalam” at left – “I will never turn away anyone who comes to me.”

The point of all this is that the foregoing – and especially Romans 10:9 – gives all real Christians a ready answer to so-called conservative Christians who say or imply that you and I are “going to hell” if we choose not to interpret the Bible in exactly the same way that they do.  (See “No such thing as a ‘conservative Christian,'” and – as to the “going to hell card” – The Bible’s “dynamic tension,” on the danger of accusing fellow Christians of “heresy.”)

All you have to say is:  “I’ve confessed with my lips that Jesus is Lord, and believe in my heart that God raised Him from the dead.  So the Bible says I’m saved.”  (Even – gasp! – a “liberal Christian.”  On that note see There Is Such a Thing as a ‘Liberal’ Christian.  His name was Jesus.)

I’ve written on Romans 10:9 in “Trump-humping” – and Christians arguing with each other.  That included an added reference to 1st Corinthians 12:3:  “No one can say, ‘Jesus is Lord,’ except by the Holy Spirit.”  And about that tension between Deuteronomy 19 and Ezekiel 3:

And speaking of too-far-right conservative Christians who take “an isolated passage from the Bible out of context” (including “Stumpy,” at right):  One of the psalms today is Psalm 127.  Which includes Psalm 127:3-5: “Children are a gift from God; they are his reward.  Children born to a young man are like sharp arrows to defend him.  Happy is the man who has his quiver full of them.”

I’ve written on that topic is “Bible basics” revisited:

[S]ome Christians become snake handlers. (Like “Stumpy…”)  They do this based on a literal interpretation of Mark 16:18.  In other words, taking an isolated passage from the Bible out of context…  Other Christians work to develop large families – as a way of showing their faith – again based on focusing literally on Psalm 127:3-5, taking that one passage out of context: “Children are a gift from God; they are his reward.  Children born to a young man are like sharp arrows to defend him.  Happy is the man who has his quiver full of them.”

See Quiverfull – Wikipedia, on the “movement of conservative Christian couples” which sees children as a “blessing from God” and “encourages procreation, abstaining from all forms of birth control (including natural family planning) and sterilization.”

But “Basics” revisited set out an arguably-better approach:  You “could approach the Bible as presenting a plain, common-sense view of some people in the past who have achieved that ‘union with a Higher Power.'”  Such a common-sense approach can lead to an ability to transcend the painful and negative aspects of life, to live with “serenity and inner peace,” and develop a “zest, a fervor and gusto in life plus a much higher ability to function.”

Which means that ideally, one who reads the Bible on a daily basis should not become an intolerant, self-righteous prig.  (Going around telling others how to live.)  Or as Saint Peter said, “Don’t let me hear of your … being a busybody and prying into other people’s affairs…”  Instead, such Bible-Reading on a regular basis should lead to a well-adjusted and open-minded person.  And also one who is tolerant of the inherent weaknesses – including his own – of all people.  In other, a person able to live life “in all its fullness.”

So how do you do all that?  Here’s an answer from one of the great philosophers of our time:

The upper image is courtesy of Triumphal entry into Jerusalem – Wikipedia.  It included the note:  “In Luke 19:41 as Jesus approaches Jerusalem, he looks at the city and weeps over it (an event known as Flevit super illam in Latin), foretelling the suffering that awaits the city.”  See also Luke 13:34 and Luke 19:42.  Luke 13:34 reads:  “O Jerusalem, Jerusalem, who kills the prophets and stones those sent to her! How often I have longed to gather your children together as a hen gathers her chicks under her wings, but you were unwilling.”  Luke 19:42 adds, to the previous verse, “If only you had known on this day what would bring you peace!  But now it is hidden from your eyes.”  See also Flevit super illam – The Collection – Museo Nacional del Prado

The Palm Sunday image is courtesy of Palm Sunday – Image Results.  The image is accompanied by a web article from 2017, “Palm Sunday – How Jesus’ Triumphant entry into Jerusalem turned the world on its head.”  The article is from Christian Today, “the UK’s largest online Christian news provider, with the latest in-depth reports.”  The April 8, 2019 edition included an article, “Brexit and the decline of Britain: lessons from the Old Testament,” which included some interesting reading:

Britain today in its moral and political turbulence is reminiscent of Old Testament Israel in the 11th century BC. That too was a time when there was no guiding consensus and “all the people did what was right in their own eyes” (Judges 21v25).  But instead of looking to God, of course, Israel demanded a new system of government in the form of a strong man (1 Samuel 8v5) – just as many in Britain are now apparently doing.

The article noted in recent years many countries have opted “for maverick ‘strongmen’ to lead their nations – Erdogan in Turkey;  Putin in Russia;  Berlusconi in Italy;  even Trump, in a way, in America.”  (In a way?)  It then cited polling by the Hansard Society which indicated that “54% of voters would like ‘a strong ruler willing to break the rules.’  Only 23% said they were against such an idea.”

As to the goal for Lent about Donald Trump…  I wrote in The Bible’s “dynamic tension:”

So – for this Lent – I’m going to try mightily to prepare a reasoned, careful, logical blog-post treatise on precisely “why I don’t like Donald Trump.”  (Without resorting to the “fallacy of ad hominem attacks.”)  In other words, I will try – without resorting to name-calling – to present the valid reasons why I think Trump’s presidency is a constitutional crisis on par with Watergate…  Beyond that – for my Lenten discipline this year – I am also going to try mightily to understand why some Americans still support him.  (Without saying, “What are you, dumbasses?”)  And that is definitely going to be the hard part…

The John 6:37 “malayalim” image is courtesy of John 6:37 – Image Results.  Malayalam is a Dravidian language; that is, a “language family spoken mainly in Southern India and parts of Central and Eastern India, as well as in Sri Lanka with small pockets in southwestern Pakistan, southern Afghanistan, Nepal, Bangladesh and Bhutan, and overseas in other countries such as Malaysia, Philippines, Indonesia and Singapore.”  That language is “spoken in the Indian state of Kerala and the union territories of Lakshadweep and Puducherry (Mahé) by the Malayali people, and it is one of 22 scheduled languages of India.”  Which proves the universal appeal of Jesus, to whom all people – including grumpy old white people who should know better – are “infants before God.”  See for example Where do I find the age of accountability in the Bible, which included the example of 2 Samuel 12:21–23, where “David seemed to be saying that he would see his baby son (in heaven), though he could not bring him back.”  Then there’s this:

[T]his is a subject about which we should not be adamant or dogmatic.  God’s applying Christ’s death to those who cannot believe would seem consistent with His love and mercy. It is our position that God applies Christ’s payment for sin to babies and those who are mentally handicapped, since they are not mentally capable of understanding their sinful state and their need for the Savior, but again we cannot be dogmatic.  Of this we are certain: God is loving, holy, merciful, just, and gracious … and He loves children even more than we do.

The lower image is courtesy of izquotes.com/quote/217824.  See also Charlie Chan (Wikipedia).  The quote is said to have come from Charlie Chan at the Circus, and in the form given.  See Charlie Chan – Wikiquote and Reel Life Wisdom – The Top 10 Wisest Quotes from Charlie Chan.  But I could have sworn that the actual quote was, “Mind like parachute;  work best when open.”