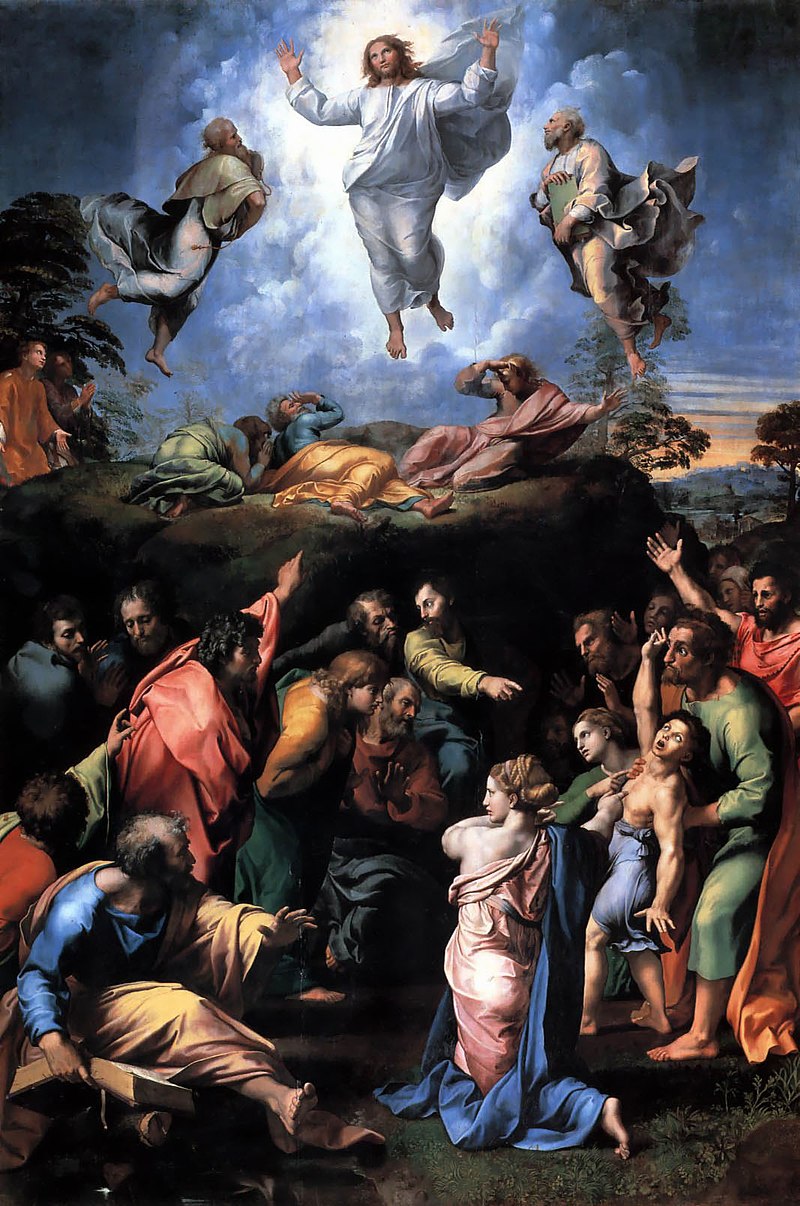 August 6 is the Feast Day for The Transfiguration, arguably the “greatest miracle in the world.” (Unlike the other miracles of Jesus, this one happened to Him.   All the others involved Jesus doing things for other people.)  The story of the Transfiguration is told in Luke 9:28-36:

About eight days after Jesus had foretold his death and resurrection, Jesus took with him Peter and John and James, and went up on the mountain to pray.  And while he was praying, the appearance of his face changed, and his clothes became dazzling white.  Suddenly they saw two men, Moses and Elijah, talking to him.  They appeared in glory and were speaking of his departure, which he was about to accomplish at Jerusalem…

See also Transfiguration of Christ, which noted this particular miracle is unique among those listed in the “Canonical gospels, in that the miracle happens to Jesus himself.” And St. Thomas Aquinas considered the Transfiguration “the greatest miracle.”  (E.A.)

The problem was that “Peter and his companions were weighed down with sleep.”  But they did manage to stay awake enough to see Moses and Elijah.  In fact, Peter thought that Moses and Elijah were planning on staying awhile.  That’s why he suggested that he make three “booths” – or primitive huts – for Moses, Elijah and Jesus to stay in. (Luke 9:33.)

See also Sukkot – Wikipedia, which described the type of “booth” that Peter was referring to.  (Sukkot is also known as the Feast of Booths.)  The thing is:  When we think of a “booth,” what comes to mind is a “stall, compartment, or light structure for the sale of goods or for display purposes, as at a market, exhibition, or fair.”  (Like the “kissing booth” at left.)  But Peter was thinking of a whole different structure.

During Sukkot, faithful Jews remember The Exodus by living in the kind of huts their ancestors stayed in while Wandering for 40 years in the Wilderness.  That kind of booth is a frail, lean-to-type structure, with two-and-a-half walls and covered with some kind of local plant material.  (Which hopefully won’t “blow away in the wind.”)  The feast is “intended as a reminiscence of the type of fragile dwellings in which … the Israelites dwelt during their 40 years of travel in the desert after the Exodus from slavery in Egypt.”  (See Judaism 101: Sukkot.)

But back to the Gospel.  We pick up after Peter spoke of the booths, “not knowing what he said:”

While he was saying this, a cloud came and overshadowed them; and they were terrified as they entered the cloud.  Then from the cloud came a voice that said, “This is my Son, my Chosen; listen to him!”  When the voice had spoken, Jesus was found alone.  And they kept silent and in those days told no one any of the things they had seen.

Which brings up the painting above.  (Courtesy of Transfiguration (Raphael) – Wikipedia.)

Wikipedia said the painting “exemplifies Raphael’s development as an artist and the culmination of his career.”  And it’s unique for showing both the Transfiguration – in the upper half of the painting – along with another episode from the Gospels in the lower half.

The lower part of the painting illustrates Matthew 17 (verses 14-21), where Jesus had to step in and heal a boy possessed by demons, after the disciples couldn’t do it themselves.  (This comes right after Matthew’s account of the Transfiguration in Matthew 17, verses 1-13.)

The upper part of the painting shows Moses and Elijah “floating.”  On the ground, the three disciple-witnesses,  “from left to right, James, Peter and John, traditionally read as symbols of faith, hope and love; hence the symbolic colors of blue-yellow, green and red for their robes.”

In Christian teachings, the Transfiguration is a pivotal moment, and the setting on the mountain is presented as the point where human nature meets God: the meeting place for the temporal and the eternal, with Jesus himself as the connecting point, acting as the bridge between heaven and earth.

For another view, check out Feast of the Transfiguration of Our Lord.  That site presents a Greek Orthodox analysis, including that – in the story – Moses and Elijah “represent the Law and the Prophets.” (“Moses received the Law from God, and Elijah was a great prophet.”) So it was indeed a dramatic moment in time. Or as Aquinas said, “the greatest miracle.”

Or see What was the meaning and importance of the transfiguration.  The site noted that the three disciples “never forgot what happened that day,” which was probably exactly what Jesus intended.  John, one witness wrote in his gospel, “We have seen His glory, the glory of the one and only.” (John 1:14)  Peter also noted, wrote of it, “We ourselves heard this voice that came from heaven when we were with Him on the sacred mountain.” (2 Peter 1:16-18.)

The disciples, who had only known Him in His human body, now had a greater realization of the deity of Christ…  That gave them the reassurance they needed after hearing the shocking news of His coming death…  But God’s voice from heaven – “Listen to Him!” – clearly showed that the Law and the Prophets [noted above] must give way to Jesus.

And one last note:  See Readings for October 26 for more on this feast and how it fulfilled a centuries-old dream for Moses, who God kept from the Promised Land. (See Why was God so upset with Moses and Why Moses [couldn’t] enter the Promised Land.)  As Readings noted:

Which is proof positive that while God may have His own time-table, He always keeps His promises.  (And that patience is definitely a virtue…)

A note on the painting by Raphael:  According to Wikipedia, “The iconography of the picture has been interpreted as a reference to the delivery of the city of Narbonne from the repeated assaults of the Saracens.  Pope Calixtus III proclaimed August 6 a feast day on the occasion of the victory of the Christians in 1456.”

Re:  The Greek Orthodox analysis.  Feast of the Transfiguration of Our Lord added that in addition to representing “the Law and the Prophets,” both Moses and Elijah experienced visions of God.  (“Moses on Mount Sinai and Elijah on Mount Carmel.”)  And the two men “represent the living and the dead (Elijah, the living, because he was taken up into heaven by a chariot of fire, and Moses, the dead, because he did experience death).”  But see the final note above…

The lower image is courtesy of Christian mysticism – Wikipedia, the free encyclopedia, with the caption:  “Transfiguration of Jesus depicting him with Elijah, Moses and 3 apostles by Carracci, 1594.”  The site noted:  “[P]ractices such as the Eucharist, baptism and the Lord’s Prayer all become activities that take on importance for both their ritual and symbolic values.”  Further, “Jesus’ conception, in which the Holy Spirit overshadows Mary, and his Transfiguration, in which he is briefly revealed in his heavenly glory, also become important images for meditation.”

For related posts see On Exodus (Part II) and Transfiguration and On the Bible and mysticism.