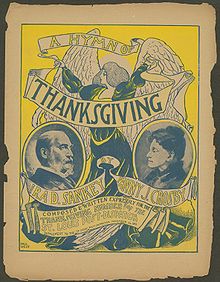 It’s hard to believe, but Thanksgiving is less than a week away.

Which means it’s about time to give thanks “for the fruits of the earth in their season and for the labors of those who harvest them.”  And that’s especially true after the bitter election* we’ve just been through.  (And survived, thank you very much.)

Which brings up that other American Civil War.  The thing is, Thanksgiving wasn’t celebrated on the same date – “throughout the United States*” – until 1863.  (In the middle of the war.)

Abraham Lincoln set that uniform date for Thanksgiving – making it the last Thursday in November – by presidential proclamation.  He did it to “foster a sense of American unity:”

In the midst of a civil war of unequalled magnitude and severity … peace has been preserved with all [other] nations, order has been maintained, the laws have been respected and obeyed, and harmony has prevailed everywhere except in the theatre of military conflict… Population has steadily increased, notwithstanding the waste [in] the siege and the battle-field;  and the country, rejoicing in the consciousness of augmented strength and vigor, is permitted to expect continuance of years, with large increase of freedom. 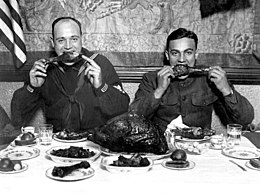 See Thanksgiving (U.S.) – Wikipedia.  And speaking of Thanksgiving in the middle of a war – cultural or otherwise – the photo at left shows “Servicemen eating a Thanksgiving dinner after the end of World War I (1918).”

(And here’s hoping that image is somehow prescient…)

Meanwhile, The first Thanksgiving – Part I – from November 2104 – included the image at right, of the “Mayflower leaving English shores.”  It also included a footnote that Americans are fed up with the political status quo and are looking for a “New Political Center:”

…intermixing liberal instincts and conservative values;  “tolerant traditionalists” who believe in “conventional social morality that ensure family stability,” while being “tolerant within reason” of those who challenge such traditional morality, “and as pragmatically supportive of government intervention in spheres such as education, child care, health care as long as budgets are balanced.”

The first Thanksgiving – Part II included a lengthy quotation from William Bradford (Plymouth Colony governor) about the difficulties inherent in  “all great and honorable actions.”  (Like trying to maintain a true democracy after the kind of heated-rhetoric election we just went through.)  Which could be summed up this way:  “If it was easy, anybody could do it!”

And finally, The 12 Days of Christmas indicated that Thanksgiving Day marks the beginning of a long holiday season that doesn’t officially end until January 6, 2017 (with Plough Monday):

Christmas celebrations are closely linked to the observance of the December solstice… Although winter was regarded as the season of dormancy, darkness and cold, the coming of lighter days after the winter solstice brought on a more festive mood.  To many people, this return of the light was a reason to celebrate that nature’s cycle was continuing.

And speaking of “dormancy, darkness and cold,” see also Dark Ages – Wikipedia, referring to the “period of intellectual darkness” between the “light of Rome,” up to the rebirth or “Renaissance in the 14th century.”  (Not that there’s any connection to current events or anything…)

Which serves as a reminder that whatever “Dark Age” you may be going through,

“Note” also that an asterisk in the main text indicates a statement supported by a reference detailed further in this, the “notes” section.  Thus, as to “bitter elections,” see also This bitter battle won’t end on election day – BBC News, for a point of view from “across the pond.”  For an ironic twist, see After a bitter election, a new America: Our first female president and the most diverse coalition in history, written on the morning of the election.  (Before the results were in.)  A prediction:  That “first female president” will come true, but not just yet.  I’m thinking Elizabeth Warren – “Hillary without the baggage” – in 2020, or Hillary herself.  (With or without the “I told ya so” dance.  See Donald Trump and the Hell’s Angel, in my companion blog.)

Re:   “Throughout the United States” and the “sense of American unity.”  Referring to a sense of American unity “between the Northern and Southern states.”  See Thanksgiving – Wikipedia, which noted that because of the “ongoing Civil War and the Confederate States of America‘s refusal to recognize Lincoln’s authority, a nationwide Thanksgiving date was not realized until Reconstruction was completed in the 1870s.”  (Which is another way of saying, “good things take time.”

Re:  “This too shall pass.”  See That’s NOT in the Bible! “This too shall pass.”  That source indicates that the phrase may originally have come from – or passed through – King Solomon.  He supposedly had a ring reminding him that all his earthly glory – as king – would eventually go away; “the inscription inside the ring became the Hebrew phrase ‘Gam zeh ya’avor,’ ‘this too shall pass.’”  See also Patton (film) Clip “All Glory is Fleeting…” – YouTube.