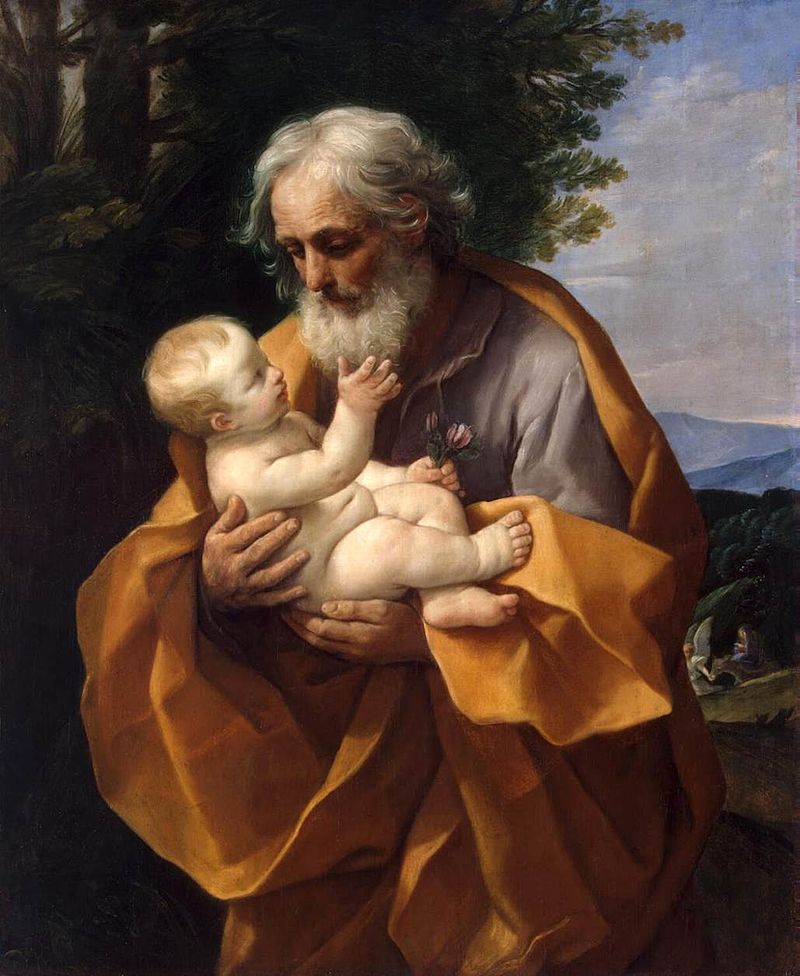 Here’s a spoiler alert:  Saint Joseph – earthly “father” of Jesus – has nothing to do with The Passover Plot.  It’s just that this post is about both St. Joe and the book by Hugh Schonfield. (The thesis of that 1965 Schonfield book: The Crucifixion was a “conscious attempt by Jesus to fulfill the Messianic expectations rampant in his time,” but His plan “went unexpectedly wrong.”)

Then too, a discussion of The Passover Plot seems especially appropriate because Easter Sunday – March 27 – is now less than two weeks away.

But first, about St. Joseph.  Last year at this time I posted On St. Paddy and St. Joe.  There I noted the unusual situation in March – of most years – where a minor feast day is celebrated more than a major feast day.

That is – in a liturgical sense – the “earthly father[figure] of Jesus” outranks – by far – Saint Patrick, patron saint of Ireland.

(As noted in St. Joe, when it comes to the list of important Bible figures with feast days, St. Joseph “comes in third only to Christ the King and Mary.”)

That’s because this year Easter comes way earlier than usual.

In other words, for this year – on what would normally be St. Patrick’s Day – the Lectionary Page has March 17 officially listed as Thursday in the Fifth Week of Lent.  But of course that won’t change the fact that “St. Paddy’s Day” will be the more widely celebrated…

For more on St. Paddy and St. Joe, see last year’s post.  It included a section on How the Irish Saved Civilization, and on how the Irish went from widespread ridicule to acceptance:

ist detractors who characterized them as drunken, violent, criminalized, and diseased [ – as illustrated at right – ] Irish-Americans were looking for ways to display their civic pride and the strength of their identity…  [They] celebrated their Catholicism and patron saint … but they also stressed their patriotic belief in their new home.  In essence, St. Patrick’s Day was a public declaration of a hybrid identity [with] a strict adherence to the values and liberties that the U.S. offered them.

But back to The Passover Plot.  As noted, the thesis of Hugh Schonfield‘s 1965 book was that the Crucifixion was part of a “conscious attempt by Jesus to fulfill the Messianic expectations [but] that the plan went unexpectedly wrong.”  On a related note, here’s something I didn’t know before:  The book was made into a movie in 1976.  That is, it was made into a:

Dramatization of the controversial best-seller that posits an alternate version of the birth of Christianity.  In this version, Jesus planned for His crucifixion by taking a drug that would simulate death.  After His unconscious body was placed in the tomb, a religious sect known as the Zealots would secretly steal Christ’s body from the tomb, then spread the rumor that He had risen, thus fulfilling Biblical prophecy.

The one thing I do remember is that the book was so fascinating it made me miss a plane to Key West.

This was in the days before cell phones.  (In the late 1980s or very early 1990s.)  My late wife was working as a traveling sales-lady, for a company that did church directories.  So when she got posted down to Key West, I planned to fly down for the weekend.  (From Tampa Airport.)

I brought along a copy of Passover Plot.  I got checked in and seated in the waiting area, then started reading.  When I looked up from the book – finally – I saw that my “flight had flown.”

I ended up getting to Key West on a later flight.  I also ended up disagreeing with many or most of Schonfield‘s conclusions.  But I found his methodical research enlightening.  (In much the same way that I found Last Temptation of Christ enlightening.  There too, I didn’t agree with all the premises of the movie, but I did feel it showed the conditions in which Jesus lived, far more accurately than the typical Hollywood “blonde, blue-eyed Jesus.”)

Then too, I’ve always felt that personal faith is not a matter of scientific proof.  (Like those “boot camp Christians” who look so assiduously for proof of Noah’s Ark in Turkey, on or near Mount Ararat.)    To me, faith is more a matter of that ongoing interactive walk to Jesus.

(See also GIST of the matter, and Why I’d Still Believe In God Even if the Bible was a Fairytale.)

But we were discussing Passover Plot.  I’ve included some excerpts in the notes, but first a couple reviews.  For one, Goodreads also called the book fascinating, as well as “lucidly written and carefully documented.”  At the same time it acknowledged “probably no other figure in modern Jewish historical research” was more controversial than Schonfield.  (At right.)

Tim Chaffey said the book “created quite a stir.”  He also questioned the author’s claims of objectivity:  “it is easily demonstrated that his bias and philosophy overrule any attempt at objectivity.”  And Stefan Zenker got to the crux of the matter:

[T]he discussion of Jesus’ faith and objectives was not what made the book controversial.  The part that created an uproar was Schonfield’s claim that Jesus painstakingly built his own legend without actually performing any miracles.  In particular, the greatest miracle of all: resurrection after death, had been carefully staged.

But Zenker also acknowledged that this “unusual book … read[s] like a thriller.”

And finally, there’s a review with a title that sounds a bit like a country-western song:  “Pass Over ‘The Passover Plot’.'”  But this review by the Christian Courier does provide one very valid reason for reading the book:  “The Passover Plot  illustrates every argument that tries to naturally explain the empty tomb.”  (Emphasis in the original.)

And if that is true, then the Courier’s take on the matter almost makes The Passover Plot a bit of  “required reading.”  After all, Jesus Himself said in Matthew 10:16, “Behold, I send you forth as sheep in the midst of wolves:  be therefore wise as serpents, and harmless as doves.”

Other translations of Matthew 10:16 tell us to be “cunning as serpents,” or “crafty as snakes,” or “shrewd as serpents.”  And since the serpent is a metaphor for the Devil, what Jesus seemed to say in Matthew 10:16 was that we should be “wise as hell” or “wise as the Devil.”

In plain words, Jesus was saying, “Know your enemy.”  (A shrewd bit of wisdom officially attributed to Sun Tzu.)  So for whatever reason, it might be “wise” to read The Passover Plot.

Unless of course you never made it beyond Bible boot-camp. . . 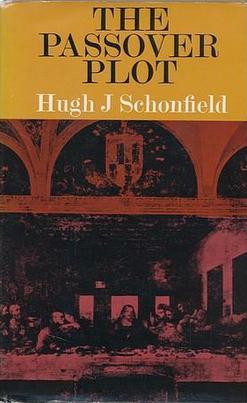 The upper image is courtesy of Saint Joseph – Wikipedia, which also noted that the “Pauline epistles make no reference to Jesus’ father; nor does the Gospel of Mark.”    The caption for the painting:  “Saint Joseph with the Infant Jesus, Guido Reni (c. 1635).”

The plot summary of the movie version of Passover Plot was written by Mike Konczewski.

The Schonfield image is courtesy of the zenker review.

The following excerpts are from the 1967 “Bantam Books” paperback version of The Passover Plot.

1)  At pages 17-19, Schonfield described circumstances “making the Messianic Hope the powerful influence it became in the first century B.C.,” one of which was a “change of attitude towards the Bible.”  The Hebrew Bible had three divisions, the Law, the Prophets, and the Writings:

The Law, as consisting of the five books of Moses, had binding force by the fifth century B.C., or not much later.  The Prophets did not acquire their force until about the third century B.C….  The effects of the recognition of the Law and the Prophets … as a corpus of sacred Scriptures were far-reaching.  It opened the way for a new development, the treatment of these books as the Oracles of God.  They became subject to all kinds of interpretation to draw out of them hidden meaning hidden meanings and prognostications.

This and other factors – including occupation by foreign armies – led to an increase in both religious devotion and “messianic thinking and prediction.”  As a result, from “160 B.C. we are in a new age, an age of extraordinary fervour and religiousity…  The whole condition of the Jewish people was psychologically abnormal.”  At page 23 he added, “A whole nation was in the grip of delirium.”

2)  And speaking of Palm Sunday – coming up next week – at pages 114-15, Schonfield wrote of “the brilliant move on the part of Jesus” to enter Jerusalem openly, and with great fanfare.  “There had been no attempt  to sneak into the city unobserved.”  That brilliant move also kept the members of Sanhedrin from “molesting” Jesus.  And speaking of being “wise as a serpent:“

He had finally allowed Himself to be acknowledged as the Messiah; but the clever way in which He had done this secured Him for the present complete freedom from molestation.  They had to recognise that they were up against a man of courage, cunning and ingenuity.

And finally,  3)  At pages 179-80, Schonfield noted the love and compassion of Jesus, but “united with commitment …  the emphasis is on deeds as the proof of faith and love.”  He then indicated – in an offhanded way – that we too could fulfill John 14:12 by performing as great or greater miracles than Jesus.   (Okay, that last was a bit of artistic license on my part.)  He concluded Part I with this:

The Iron Chancellor Bismarck, with reluctant admiration, once said of Disraeli, another famous schemer, “The old Jew, there is the man!”  Seen in the Messianic light of the Passover Plot we can with more wholehearted approbation say of jesus, “The young Jew, there was the Man!”

All of which leads to a key observation.  It was apparently only from the fifth century B.C. on that the Hebrew Bible achieved “binding force.”  It was also at that “original” time that the Scripture “became subject to all kinds of interpretation to draw out of them hidden meaning hidden meanings and prognostications.”  In other words, it appears that as originally intended, there were no “boot-camp Hebrews.”  Then too, it can be said that in his book Schonfield greatly admired Jesus, even if he didn’t recognize Jesus as “the Messiah.”  But as noted above, while I disagreed with much of what Schonfield wrote, I found his research enlightening.  That is, giving “spiritual or intellectual insight.”