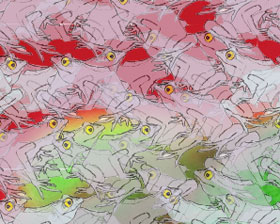 I just got back from a two-week vacation to New York City and Montreal, which included a round-trip on Amtrak’s Adirondack Route, “through the wine country of the Hudson Valley.”  (See On the Bible readings for July 13, “written in beautiful Montreal.”)

So anyway, last Sunday afternoon – July 13 – I was driving home on Interstate 81, through western Virginia’s Shenandoah Valley, and talking on the phone* with Mi Dulce, who happened to take her two-week vacation at the same time (albeit in Cleveland Ohio).

This nice lady was saying something about getting some things back from her former life in Cleveland, which included what sounded like her Infinite Frog.    There followed a couple of definite say whats?   But as it turned out, this mi Dulce o’ mine was actually saying that she’d gotten her Infant of Prague back, which then became the seed thought for this blog-post.

The Infant Jesus of Prague . . . is a 16th-century Roman Catholic wax-coated wooden statue of child Jesus holding a globus cruciger, located in the Carmelite Church of Our Lady Victorious in Malá Strana, Prague, Czech Republic.  Pious legends state that the statue once belonged to Saint Teresa of Avila and allegedly holds miraculous powers, especially among expectant mothers.

See Infant Jesus of Prague – Wikipedia, the free encyclopedia.  (As was explained later, this statuette – also known as a “Child of Prague” –  was a gift from a former mother-in-law.)

As Wikipedia noted, thousands of pilgrims pay homage to the Infant of Prague every year, and statuettes of this “Infant Jesus are placed inside many Catholic churches, sometimes with the quotation, ‘The more you honor me, the more I will bless you.'”  Further, devotion to the “Child of Prague and belief in its power to influence the weather is still strong in many parts of Ireland. A wedding gift of a statue of the Child of Prague is particularly auspicious.”   (E.A.)

It further turns out that the basis for this adoration goes back four centuries:

In April 1639, the Swedish army began a siege of the city of Prague.  The frightened citizens hurried to the shrine of the Infant Jesus of Prague as services were held day and night at the Church of Our Lady Victorious in the Little Quarter.  When the [Swedish] army decided instead to pull out, the grateful residents ascribed this to the miraculous Holy Infant.  The tradition of the Infant Jesus procession and the coronation continues to this day.  This ceremony is the closing highlight of the annual Feast of the Infant Jesus in Prague.

As the Book of Common Prayer noted, “the principle kinds of prayer are adoration, praise, thanksgiving, penitence, oblation, intercession, and petition.”

Most people are more familiar with the petition type of prayer, basically translated, “Gimme, gimme, gimme!”   On the other hand, we’ve all had times in our lives when we’ve found ourselves in way over our heads, like those people of Prague in 1639, but that’s a totally different “petition.”  It also brings up the “thrilling drama” noted above, and Psalm 50:15:

Call upon me in the day of trouble; I will deliver you, and you shall honor me.

Which is another way of saying that God loves drama.   So, if you expect to go from victory to victory when you begin your Christian Pilgrimage, you’re in for a big surprise.  (For one thing, drama makes a much better story to bore your grandchildren with.)

But all of this drama in your life can lead to the best, simplest and most appreciated-by-God type of prayer, adoration, “the lifting up of the heart and mind to God, asking nothing but to enjoy God’s presence.”  For more on that see On three suitors (a parable), and this prayer:

In the meantime, enjoy having learned about this Infinite Frog. The upper image is courtesy of Infinite Frogs | Are We Full Yet?

The lower image is courtesy of the article, Infant Jesus of Prague – Wikipedia, and includes the caption: “The elaborate shrine which houses the wax-wooden statue.  Church of Our Lady Victorious, Mala Strana, Prague, Czech Republic.”

The article includes a section on Vestments:

Several costly embroidered vestments have been donated by benefactors.  Among those donated are those from Empress Maria Theresa and Emperor Ferdinand I of Austria, which are preserved to this day.  A notable garment in the collection is an ermine cloak placed on the statue the first Sunday after Easter, which is the anniversary day of the coronation of the statue by the bishop of Prague in 1655.   In 1713 the clothing began to be changed according to the liturgical norms.  Other valuable garments worn by the image are vestments studded with various gemstones, embroidered with gold French bullion wire threading, and silk fabrics as well as handmade lace customised purposely for the statue.

The schedule includes Green for “Ordinary Time;” Purple for “Lent, Candlemas and Advent;” Red or Gold for Christmas and Easter; and Royal Blue for “Immaculate Conception / Feast of Assumption.”

*  As to “talking on the phone,” I was using the functional equivalent of Bluetooth.