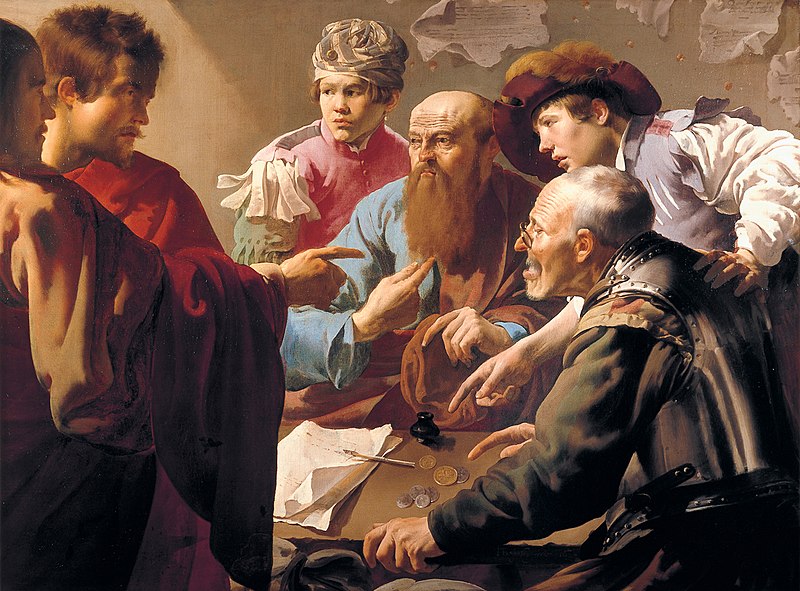 “The Calling of St. Matthew,” by Hendrick ter Brugghen, as described in Matthew 9:9-13…

I wrote in 2016’s St. Matthew and “Cinderella” that two major feast days in September are Holy Cross Day (9/14) and St. Matthew, Evangelist (9/21).  A third major feast day comes on September 29, for “St. Michael and All Angels.”  And just as an aside, there’s a painting in that last post, “Archangel Michael reaching to save souls in purgatory.”  To which I said:

There’s more on that later, but first:  To review, 9/14’s Holy Cross Day is one of several Feasts of the Cross, all of which “commemorate the cross used in the crucifixion of Jesus:” 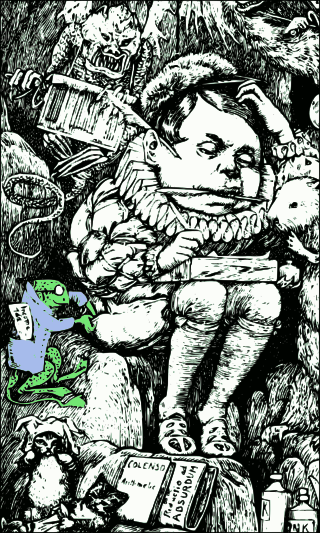 As far as St. Matthew and “Cinderella” go, that post noted that the love Jesus had for all mankind extended even to tax collectors.  (As caricatured at left.)

That is, in Jesus’ time – and among the Jewish people especially – such a tax farmer as Matthew was “sure to be hated above all men as a merciless leech who would take the shirt off a dying child.”  And so – during the time of Jesus – devout Jews avoided them at all costs.

They were fellow Jews, but worked for the Romans as tax collectors.  And “because they were usually dishonest (the job carried no salary, and they were expected to make their profits by cheating the people from whom they collected taxes).”  Which led to this lesson from Jesus:

Thus, throughout the Gospels, we find tax collectors (publicans) mentioned as a standard type of sinful and despised outcast.  Matthew brought many of his former associates to meet Jesus, and social outcasts in general were shown that the love of Jesus extended even to them.

“Which turned out to be good news for pretty much all of us.”  Because – as a Bible conservative would have said in Jesus’ time – The Good News didn’t extend to us “Gentiles.”

There’s more good news in “St. Michael and All Angels.”  If you can keep an open mind.  I mentioned the painting captioned, “Archangel Michael reaching to save souls in purgatory.”  And that I’m ready to “take all the help I can get!”  But first some background:

Michael is mentioned most prominently in Revelation 12:7-10: 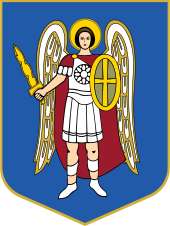 See also Michael (archangel) – Wikipedia, which noted that in the “New Testament Michael leads God’s armies against Satan‘s forces … where during the war in heaven he defeats Satan.”  Also, Michael is mentioned three times in the Book of Daniel, once as a “great prince who stands up for the children of your people.”  And the formal name for September 29 is Michaelmas.

Now comes the tricky part.  I go to the Episcopal Church, part of the Anglican Communion.   We use the Book of Common Prayer.  And the Prayer Book says the idea of purgatory is both a “Romish doctrine” and “repugnant to the Word of God.”  But like I said, I’m willing to be flexible.

The thing is, without purgatory your dying day is pass-fail.  You’re either in or you’re out.  You either go to heaven or “down, down the down-down way.”  But with purgatory you get another chance.  You can enter that “intermediate state after physical death,” where some of those “ultimately destined for heaven” can first undergo “purification, so as to achieve the holiness necessary to enter the joy of heaven.”  And like I said, I’m willing to be flexible.

So here’s to Michael (archangel), and his reaching out to save souls in purgatory.”

“Archangel Michael reaching to save souls in purgatory . . .”

The upper image is courtesy of  Brugghen, Hendrick ter – The Calling of St. Matthew.  See also Matthew the Apostle – Wikipedia.

Re:  Purgatory as a “Romish doctrine.”  See page 872 of the BCP, or The Online Book of Common Prayer under Historical Documents of the Church, Articles of Religion, Part XXII:

The Romish Doctrine concerning Purgatory, Pardons, Worshipping and Adoration, as well
of Images as of Relics, and also Invocation of Saints, is a fond thing, vainly invented, and
grounded upon no warranty of Scripture, but rather repugnant to the Word of God.

But another note on Purgatory and the Episcopal Church:  “Although denying the existence of purgatory as formulated in Roman Catholic doctrine, the Anglican and Methodist traditions … affirm the existence of an intermediate state, Hades, and thus pray for the dead.”  The latter will be addressed later this month, as noted in 2017’s On the THREE days of Hallowe’en.

The lower image is courtesy of the Wikipedia article, with the full caption: “Guido Reni‘s painting in Santa Maria della Concezione, Rome, 1636 is also reproduced in mosaic at the St. Michael Altar in St. Peter’s Basilica, in the Vatican.”