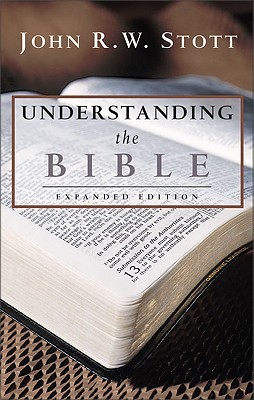 Welcome to DORScribe, a blog on reading the Bible with an open mind.

In other words, this Bible-blog is different.

It says not only that the Bible should be read with an open mind, but also that it was specifically designed to help liberate the human mind and spirit, not shackle them.   That runs contrary to a prevailing perception these days, that way too many Christians are way too negative and/or close-minded.   For more on those ideas see About this Blog, which also talks at length about how we as a people can live fuller, richer lives of great spiritual abundance, and do greater miracles than even Jesus did, if only we open our minds…

As noted in Part I, John R. W. Stott was an Anglican cleric whom Time magazine ranked among the 100 most influential people in the world.  He wrote a book, Understanding the Bible, and on pages 140-143, he made three key points.

Stott’s first point was that the process of Bible inspiration “was not a mechanical one.  God did not treat the human authors of Scripture as dictating machines or tape recorders.”

He said God spoke to the authors in different ways, sometimes through dreams and visions, “sometimes by audible voice, sometimes by angels.”  He said however God spoke to them, the writers’ “literary style and vocabulary were [still] their own…   God made full use of the personality, temperament, background and experience of the biblical authors.”  Thus there was a “dual authorship.”  The Bible was equally the word of God, and the word of men and women;  “This is, indeed, how it describes itself,” with citations. (Id, at 140-41.)

Stott next disputed the notion that “every word of the Bible is literally true.”

He said instead that the words of the Bible were true “only in context,” and cited the book of Job as an example.  He said the first 37 chapters of Job consisted of dialogue, usually between Job and his ostensible comforters, while the truth of the book was contained only in the last five chapters.  “The book as a whole is God’s word, but the first thirty-seven chapters can be understood only in the light of the last five.” (Id, at 141, emphasis added.)

Thus a key principle for Stott is that Scripture is without error “in all that it affirms.”

That principle (he said) was not always apparent “in the so-called ‘inerrancy debate.’”  Stott said (for example) that much of the Bible is written in a figurative manner, including many “‘anthropomorphic’ descriptions of God.”  He said the Bible often described God in human terms, as for example His having eyes and ears, or an “outstretched arm” or a “mighty hand.”  (On the other hand, Jesus Himself said that “God is spirit,” in John 4:24.)

Thus when we read of people hiding under God’s wings, we understand the Bible writer was passing on the truth that God “protects those who take refuge in him.” (Id, 141-42, emphasis added.  For more on the “inerrancy debate,” see Biblical inerrancy – Wikipedia, the free encyclopedia, of which more in later posts.  See also Fundamentalism – Wikipedia, the free encyclopedia, which noted that the first of the Five Fundamentals set out at the Niagara Bible Conference 1910 was “the doctrine that the Bible ‘is without error or fault in all its teaching.’”)

Then too, this business of “requiring every word of the Bible to be inerrant” brings to mind what Jesus said in Matthew 23:4, as He chastised the Scribes and Pharisees.  In the “Easy-to-Read” translation, Jesus said in pertinent part that such Scribes and Pharisees “make strict rules that are hard for people to obey.  They try to force others to obey all their rules.  But they themselves will not try to follow any of those rules.”

Of course the choice is yours.  As Jesus said in John 6:37, He would never turn away anyone who comes to Him, and if “coming to Him” means – to you – having boatloads of kids or handling snakes, He may well end up accepting you as He promised, stumpy-arm and all.  On the other hand, don’t take the words of the first 37 chapters of Job too literally, or you might end up committing suicide.  See On Job, the not-so-patient, which included this complaint:

Job opened his mouth and cursed the day of his birth…   “Why did I not perish at birth, and die as I came from the womb..?   For now I would be lying down in peace; I would be asleep and at rest…    Why is light given to those in misery, and life to the bitter of soul, to those who long for death that does not come, who search for it more than for hidden treasure, who are filled with gladness and rejoice when they reach the grave?” The upper image is courtesy of Understanding the Bible by John R.W. Stott — Reviews, ….  See also John Stott – Wikipedia, the free encyclopedia, which added – as noted – that Stott was an Anglican cleric whom Time magazine ranked among the 100 most influential people in the world.

The lower image is courtesy of Job and His Friends – Ilya Repin – WikiArt.org.