“Osceola, the Black Drink, a Warrior of Great Distinction…”

With football season now in full swing – college and pro – it’s time to announce the publication of The Scribe’s new novel, God’s Favorite Team.   The subtitle?   (“A story of the 1996 college football season, and of ritual in sports and sport-fans.”)    Here’s the sub-sub-title:

This book was originally written in the dark days after The Great FSU Loss to the Gators in the 1997 Sugar Bowl, and was intended to offer a message of hope…

In case you’ve forgotten, 1996 was the year the Florida State football team had to play a rematch against its hated arch-rival Florida Gators, despite beating them in the regular season finale.  And that only happened because of a glitch in the system:

See 1997 Sugar Bowl – Wikipedia, the free encyclopedia, emphasis added.  In other words, the end of the 1996 season not only saw FSU lose the championship game, it saw them lose in such a convoluted way that their hated archrivals won their first national title.

But we’re not hear to rehash the unfairness of the old college system.  We’re here to explore the possibility that – by following pro or college football in the proper manner – the dedicated sports fan can achieve a theophany not unlike Moses had.   (Though probably to a lesser degree.  For more on such theophanies see On the readings for August 31 – Part I, and/or Theophany – Wikipedia, the free encyclopedia.)

The hero of God’s Favorite Team got into offering a “ritual-exercise sacrifice” to help his team, but lest you think he’s alone in his delusions, consider this from Saturday, February 4, 2012.  (A day before Super Bowl XLVI, where the New York Giants beat the New England Patriots 21-17):

Whether it’s leaving up the [Christmas] tree, eating a special meal or wearing a team jersey, many sports enthusiasts have something they do in attempt to increase their team’s odds of winning.   It’s possible that these wacky fan behaviors are related to the superstitious actions some athletes take in attempt to improve their luck said Joshua Shuart, chairman of Sacred Heart University‘s department of marketing and sport management.   He pointed out that many athletes do things like growing beards or eating certain foods   because they think the behavior is lucky.  Adopting their own rituals is a way that fans can feel like they’re part of a team that they’re not actually a member of.   “It all comes down to fan identification,” Shuart said. “They really feel that they’re part of the team.”

But the hero of GFT didn’t just indulge in his own “wacky behavior,” he also added the spiritual discipline of reading the Bible on a daily basis, and it was all part of his own personal Mystic Quest.  (The “daily basis” was the Daily Office, a set of readings designed to get the reader through the Bible in two years.  For on the Office, see About the DOR Scribe, above.)

Unfortunately, while the hero’s team ended up winning three national titles (so far), he also had to endure a lot of heartache along with way.  That’s another way of saying that no one yet has found The Perfect Ritual to guarantee your team will always win.  That in turn is another way of saying good ritual sometimes does no more than help us “accept the rhythm of the seasons,” which includes losing, heartbreak and/or heartache.  An example is this February 1, 2014 post, just before the last Super Bowl, titled “Broncos fans hope superstitions pay off big time:”

This morning Grant Hankins – like thousands of other superstitious fans – will do his game day ritual…   Superstition is a large part of a fan’s repertoire these days, especially when the home team is in Super Bowl XLVIII today…   Kenny Shisler has similar superstitions.  The lifelong Broncos fan said he will wear Broncos gear all week long, but refuses to do so on game day… “Like the Bud Light commercials, ‘It’s only weird if it doesn’t work,’” Shisler said…   The superstition factor is a part of the game. It’s the fan’s way of connection to their team.  “Hopefully our fans have better rituals than the Seahawks fans,” Hankins said.

Which is yet another way of saying that in the whole history of the world, no one has found The Perfect Ritual to either:   1) “keep winter at bay,” or 2) guarantee a win for his team, or 3) – like the arrogant King Canute – “keep back the tide,” as seen below.

But here’s a hint: That’s part of the process.   More later… 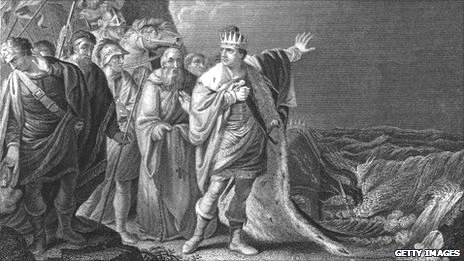 The upper image is courtesy of commons.wikimedia.org/wiki/File:Osceola,_George_Catlin,_1838.JPG.  The description included with the image reads as follows:

George Catlin painted Osceola in the final month of the warrior’s life, following his infamous capture in October of 1837.  Among the most memorable portraits in Catlin’s large body of work, the painting vividly captures the chief’s pride amid a terrible change of circumstances.

As soon as he heard of Osceola’s capture, Catlin closed his New York studio and headed south.  At Fort Moultrie, he found several competitors engaged in the process of painting and drawing Osceola.  The chief suffered the artists graciously, often sitting for two at once.  Of the group, he particularly liked Catlin, who had traveled widely in American Indian territories. The two stayed up talking late into the night.

Of the many images of Osceola, Catlin’s is the most famous and justifiably so.  The painter’s craftsmanship and respect for his subject shine through in many accurate personal details and in the chief’s nobility and calm grace.

For further information on the painter, see George Catlin – Wikipedia, the free encyclopedia.

The quotes about “keeping the winter at bay” and “accepting the rhythm of the seasons” were gleaned from the book Passages of the Soul[:]  Ritual Today,” by James Roose-Evans, Element Books Ltd. (1994)   Here are some further passages of interest: “All true ritual calls for discipline, patience, perseverance, leading to the discovery of the self within,” and this:  “No rite has yet succeeded in keeping winter at bay … nor can rites of spring guarantee an abundant harvest.  Such rituals [only] serve to help us to accept the rhythms of the seasons…”

The lower image is courtesy of BBC News – Is King Canute misunderstood?   The article cited recent media misuse of the “Canute metaphor,” and added that in the examples, “the sentiment in the same, King Canute is being used as shorthand to describe trying and failing to hold back the tide.”  But see also, King Canute and the waves, cited in Cnut the Great – Wikipedia, the free encyclopedia:

Proverbial reference to the legend in contemporary journalism or politics usually casts the story in terms of “Cnut’s arrogance” of “attempting to stop the tide.”   It was cited, for example, by Stacy Head as typifying the New Orleans city council’s response to Hurricane Katrina (2005), or by Mark Stephens in reference to Ryan Giggs as “the King Canute of football” for his attempts of stopping “the unstoppable tide of information ” on the internet in the 2011 British privacy injunctions controversy.   This is a misrepresentation of Huntingdon’s account, whose Cnut uses the tide to demonstrate his inability to control the elements and deferring to the greater authority of God.

(Emphasis added.)  The foregoing may well be of interest to those engaging in Bible study, as an example of how past events and/or accounts can be twisted, manipulated and/or “spun.”  See Spin (public relations) – Wikipedia, the free encyclopedia.