Sunday – January 25, 2015 – had Jonah 3:1-5,10 set as the Old Testament Bible-reading.  To see all the readings, check Third Sunday after Epiphany.  Here’s the full reading from Jonah:

The word of the LORD came to Jonah a second time, saying, “Get up, go to Nineveh, that great city, and proclaim to it the message that I tell you.”  So Jonah set out [and] began to go into the city, going a day’s walk.  And he cried out, “Forty days more, and Nineveh shall be overthrown!”  And the people of Nineveh believed…   When God saw … how they turned from their evil ways, [He] changed his mind about the calamity that He had said he would bring upon them; and He did not do it.

Note the emphasized, “a second time.”  That’s what makes Jonah and the Bra-burners alike.

Bra-burners – as a name for “Women’s Lib” and feminists in general – began when a reporter tweaked a story on a protest at the Miss America pageant on September 7, 1968:

The feminist protest … included tossing a collection of symbolic feminine products [and] other items into a trash can on the Atlantic City boardwalk.  They did not burn bras [but drew]  worldwide media attention and national attention to the Women’s Liberation Movement.  A reporter covering the protest drew an analogy between the feminist protesters and Vietnam War protesters who burned their draft cards, and the bra-burning trope was erroneously and permanently attached to the event and became a catch-phrase…

See Miss America protest – Wikipedia, emphasis added.  One organizer thought beforehand the protest “might be a good way to launch the movement into the public consciousness.”  That effort did succeed, but the success turned out both a “blessing and a curse.”  See Deuteronomy 11:26, and also Feminism Has a Bra-Burning Myth Problem | TIME:

The way we remember the Miss America Pageant protest in 1968 in Atlantic City, New Jersey is a good example.*  There is no statue on the Atlantic City Boardwalk to commemorate an important protest about standards of beauty for women and a contest tied into capitalism, war, and race.  Instead, our cultural touchstone from that day is the negative and trite association of feminists as “bra-burners.”

See also Pageant Protest Sparked Bra-Burning Myth : NPR.  That article said organizers intended to burn some items:  Bras, girdles, cookware and Playboy magazines.  But since the protest happened on the famed Boardwalk, police officials refused consent to burn.  So they threw the offending items into a big garbage can instead.  Then a New York Post report “included a reference to bra burning as a way to link the movement to war protesters burning draft cards.”  As one organizer later noted, “The media picked up on the bra part.”

Which brings up a logical question:  “What the heck does all this have to do with Jonah?”

Simply this:  Ever since the Book of Jonah was written (it seems) Bible-readers have “picked up on the whale part.”  In doing so they’ve ignored the real message behind the book.

The real message behind the Book of Jonah is that God’s love is universal.  In Jonah’s case, that love of God extended even to the people of Nineveh.  At the time, Nineveh was the capital of the Neo-Assyrian Empire, an empire that was both israel’s arch-enemy and was noted for its ruthlessness and cruelty.  See Assyria — Ancient History Encyclopedia:

[T]he Assyrians and their famous rulers, with terrifying names like Shalmaneser, Tiglath-Pileser, Sennacherib, Esarhaddon and Ashurbanipal, rate in the popular imagination just below Adolf Hitler and Genghis Khan for cruelty, violence, and sheer murderous savagery… [I]t is tempting to see the Assyrian Empire … as a historical forebear of Nazi Germany:  an aggressive, murderously vindictive regime supported by a magnificent and successful war machine…  (E.A.)

See also Nineveh – Wikipedia.   In modern terms – and to use a college football “trope” – God’s telling Jonah to go to Nineveh would be somewhat like His telling an FSU fan to go to Gainesville and proclaim salvation for Gator fans.  (And/or that they – the Gators – were now “God’s Favorite,” and were about to win a national championship.   The same could be said of God ordering an Alabama fan to go to Auburn with the same message, or a Michigan fan to go to Columbus, home of the Ohio State University, but we digress...)

The point is this:  The whale in the Book of Jonah became a catch-phrase.   The whale got the story into public consciousness, but that attention-getter has been both a blessing and curse.  The average reader tends to “pick up on the whale part.”  (You might even say there’s a “negative and trite association” between Jonah and the whale.)  Or as Isaac Asimov noted:

Clearly, the Book of Jonah … is the product of that school of Jewish thought which was universalist and which opposed the nationalist view…  It is the universality of God and the attribute of divine mercy that are the lessons of Jonah.  Those who think of the book as nothing more than the story of a man and a whale miss the whole point.

Then there’s the question whether you have to believe the whale-part of the story is literally true, in order to “get into heaven,” but that’s a subject for a future blog-post… 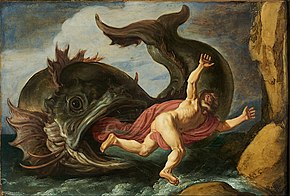 The upper image is courtesy of Recalling the 1960s ‘bra-burning days of women’s lib’ | Media Myth Alert.  Also on this subject see Bra Burning Feminists of the Sixties – NOT.

Re: the Sunday Bible reading for Sunday January 25, 2015.  That was according to the Revised Common Lectionary.  See Wikipedia.

Re: “tweaked.”  See Tweak – Definition and More … Merriam-Webster:  To “change (something) slightly in order to improve it : to make small adjustments to.”  No doubt the reporter in question thought the tweak made for a much better story.

Re: Boardwalk.  The Wikipedia article noted, “One of the earliest such boardwalks was designed in New Jersey and opened June 26, 1870, in Atlantic City.”

Re:  “The way we remember … a good example.*”   I.e., an example of “our conflicted feelings about women as major players in American history,” as a reason for “our failure to honor the movement.”

Re: “a New York Post report.”  The Wikipedia article said a story by “Lindsy Van Gelder in the New York Post carried a headline ‘Bra Burners and Miss America.’   It drew an analogy between the feminist protest and Vietnam War protesters who burned their draft cards.”

Re: Assyrian brutality.  The site Assyria — Ancient History included a counter-point to the accusation of some that this particular empire was excessively cruel:  “While the reputation for decisive, ruthless, military tactics is understandable, the comparison with the Nazi regime is less so.”  The quote in the main text was attributed to historians Paul Kriwaczek, “Simon Anglim and others.”

Re: Jonah’s “real message.”  See also Grace In The Book Of Jonah – Sermon Central:  “the story of Jonah is so well known that we can sometimes skip over it and ignore what the true message of the book of Jonah is.”  See also Jonah Summary – Bible Hub:  “The purpose of this book is to show that God is a merciful and gracious God.  Although the wicked city of Nineveh deserved to be crushed immediately, God was patient towards them.  A reluctant prophet, Jonah originally ran from God before delivering a message of repentance to the nation of Nineveh.”

Re: Isaac Asimov.  The quote on the Book of Jonah is from Asimov’s Guide to the Bible (Two Volumes in One),  Avenel Books (1981), at pages 648-49.  Asimov (1920-1992) was “an American author and professor of biochemistry at Boston University, best known for his works of science fiction and for his popular science books.  Asimov was one of the most prolific writers of all time, having written or edited more than 500 books and an estimated 90,000 letters and postcards.”  His list of books included those on “astronomy, mathematics, the Bible, William Shakespeare’s writing, and chemistry.”  He was a long-time member of Mensa, “albeit reluctantly;  he described some members of that organization as ‘brain-proud and aggressive about their IQs.'”  See Isaac Asimov – Wikipedia.