The One World Observatory, a highlight of my recent road trip …

Assiduous readers will notice I hadn’t done a blog-post since last June 20.  The reason:  I took a two-week-long road trip, to points north including Atlantic City and New York City.  (Also known as the Big Apple.)   As always, such a pilgrimage can be both instructive and enlightening – not to mention just plain fun.  There’s more on that below, but first:

Welcome again to “read the Bible – expand your mind:”

John Steinbeck’s 1960 book Travels with Charley is all about pilgrimages in general and driving pilgrimages especially.  (See also 12 miles offshore, in a companion blog.  That post also refers to a “journey or search of moral or spiritual significance.”)

So the theme of this post will be to treat my recent road trip as a kind of Reader’s Digest condensed version – slash microcosm – of Steinbeck’s book and/or his travels.  In doing so I’ll be trying to find some moral and/or spiritual significance.  Also in doing so, I’ll be noting some significant differences between road-trip travel in 1960 and 2015.

But before we get into that, I should note that all during the trip up I “religiously” kept up with my Daily Office Readings.  And they were pretty exciting.  Early on there were Old Testament readings about the ancient practice of gouging out your enemy’s right eye.  (See the OT readings for Monday, June 28, 1 Samuel 10:17-27, and Tuesday, June 29, 1 Samuel 11:1-15.  See also Gouging the Eyes – Holman Bible Dictionary.)  And they ended with the well-known story of David killing Goliath.  See 1st Samuel 17, verses 31-39.  That was on July 11, the day before I got back home.  (And in turn I figure there might be some kind of object Lesson there.)

There’ll be more on those below, but getting back to the drastic differences in highway travel from 1960 to 2015.  For one thing, for the price you pay to camp these days – as Steinbeck generally did – you can get a quite comfortable Motel 6.  (And that’s tent camping.  Then too, for the price you pay for an RV or travel trailer, you could have stayed at a lot of Motel 6’s.)

For another thing, I didn’t pack hunting or fishing gear for my travels, as Steinbeck did.

I did pack – in my spandy-new 2015 Ford Escape – an 8-foot kayak, along with a stair-stepping stand and a 22-pound weight vest.  (To earn my Cooper aerobic points along the way.)  In that kayak – for example – I paddled across the Delaware River just below Wilmington.  (As seen at right, from the New Jersey side.)

I also paddled – some – up the Shenandoah River in Virginia, and through some of the backwater “meadows” southwest of Atlantic City.  Last but not least, I paddled for two hours on a nice little hideaway, Carvins Cove Reservoir.  It’s also in Virginia, just outside Roanoke.

A third big difference:  I didn’t get lost as much or as easily as Steinbeck.  (Or as he said he did.)  That was thanks mostly to my finally figuring out how to use the “map app” on my cell phone.

And I didn’t have to stop at a payphone – remember those? – to have a three or four-minute conversation every third or fourth day, to re-establish contact with the family “back home,” as Steinbeck did.  There was no need to.  The three branches of the family converging at the Swedesboro (NJ) cemetery – one of the main reasons for the get-together in the first place – could maintain constant contact via cell phone, including “instant texting.”

I did need to stop from time to time at local libraries, to use their computers.  But that was only if I needed a secure connection, like to check my bank accounts or – with the Ford being so new – to make the first payment, a few days into the trip.  (At the Hoboken Library.  Hoboken – across the Hudson – was the family base for visiting Manhattan, seen above left.)

And I wonder what John would have thought of cruise control?  (In either sense of the term…)

So now to set the stage for the trip:  Earlier this year, my brother from Utah sent an email saying that he and his wife were visiting the Northeast in July, and would I like to join them?  Naturally I said yes, especially when another reason was added:  Laying our father’s ashes to rest in the family plot in Swedesboro, New Jersey, along with those of his first wife – our mother – and our maternal grandmother and grandfather, and other of their offspring.

The ashes had been left in the care of Dad’s second wife, who in turn had died just last November 2014.  So in the months leading up to the road trip, discussion was had via email concerning the interment, along with getting headstones honoring their service in World War II.  (He was a navigator in the Army Air Corps.  She was an Army nurse in Memphis, where they met.)  And the memorial lent a certain gravitas to the whole “joint venture.”

Which makes this as good a place as any to end the first installment of my mid-summer travelog.  Except to note that one of the places I wanted to visit – on the way home – was Reading PA, known in literary circles as “Brewer.”  This fictional Brewer is the setting of John Updike’s five books about Harry “Rabbit” Angstrom, each constituting an homage to the full decades from 1960 to 2000.  (I’ve read all four novels and the final novella.) 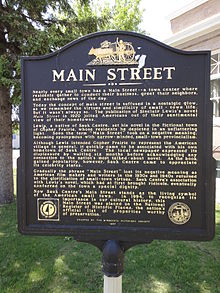 In this way my trip emulated Steinbeck’s visit to Sauk Centre, Minnesota, “metaphoric setting of [Sinclair] Lewis’ satirical novel, Main Street,” seen at right.  (See also On Oscar Wilde and “gross indecencies”.)  There’ll be more about that aspect of the road trip – and more – in the next installment.

But getting back to that David-and-Goliath story, as told in the Old Testament reading for Saturday, July 11: 1st Samuel 17:31-49.  As noted in Goliath – Wikipedia, the free encyclopedia:

Jewish traditions stressed Goliath’s status as the representative of paganism, in contrast to David, the champion of the God of Israel.  Christian tradition gave him a distinctively Christian perspective, seeing in David’s battle with Goliath the victory of God’s king…   The phrase “David and Goliath” has taken on a more secular meaning, denoting [any] underdog [] contest where a smaller, weaker opponent faces a much bigger, stronger adversary.

The article further noted this is “arguably the most famous underdog story” of all time, and that the phrase is widely used in news media, to characterize “underdog situations in every conceivable context, without religious overtones.”  The article also cited the work of Professor Leonard Greenspoon.  See  David vs. Goliath in the Sports Pages:

While most writers use the story for its underdog overtones (the little guy wins), there are rich subtleties of the biblical narrative that writers of all stripes can mine.  For example, David leaves behind his armor when he fights the militantly attired Goliath.  Where Goliath is heavy and slow, David is light and agile.  David is modest, but Goliath brags about his might…

So I guess there is some kind of object Lesson there… 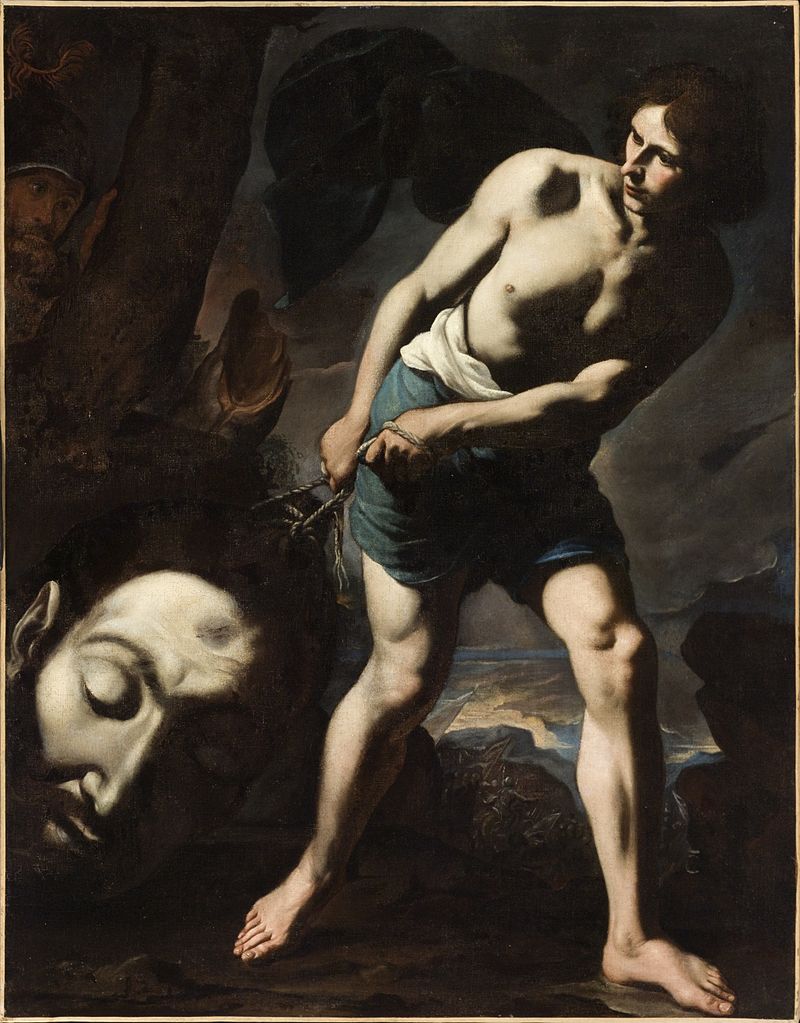 David and his big-headed enemy, Goliath…

*  Not to be confused with A Midsummer Night’s Dream, the comedy by William Shakespeare.  Written between 1590 and 1597, it’s “one of Shakespeare’s most popular works for the stage and is widely performed across the world.” See Wikipedia, and also Travelogue | Definition … by Merriam-Webster.

The upper image is courtesy of  One World Observatory: Curbed NY.  It’s part of the article,  It’s Official: One World Observatory Will Open May 29.  On July 13, 2015, that was five articles down from Don’t Eat at One World Trade Center’s Sky-High Restaurants.  And it was true that the place was crowded, prices were high and seating was at a minimum.

Re:  Earning aerobic points along the way.  The term “aerobics” – along with the need for cardio-vascular exercise in general – didn’t enter into popular use until 1968, some eight years after Steinbeck’s road trip.  That was with the publication of his ground-breaking book Aerobics.  See also Kenneth H. Cooper – Wikipedia, the free encyclopedia.

The Delaware Bridge image is courtesy of https://de.wikipedia.org/wiki/Delaware_Memorial_Bridge, which is apparently the German-language edition.

The bottom image is courtesy of Goliath – Wikipedia, the free encyclopedia.  The caption:  David with the Head of Goliath, circa 1635, by Andrea Vaccaro.