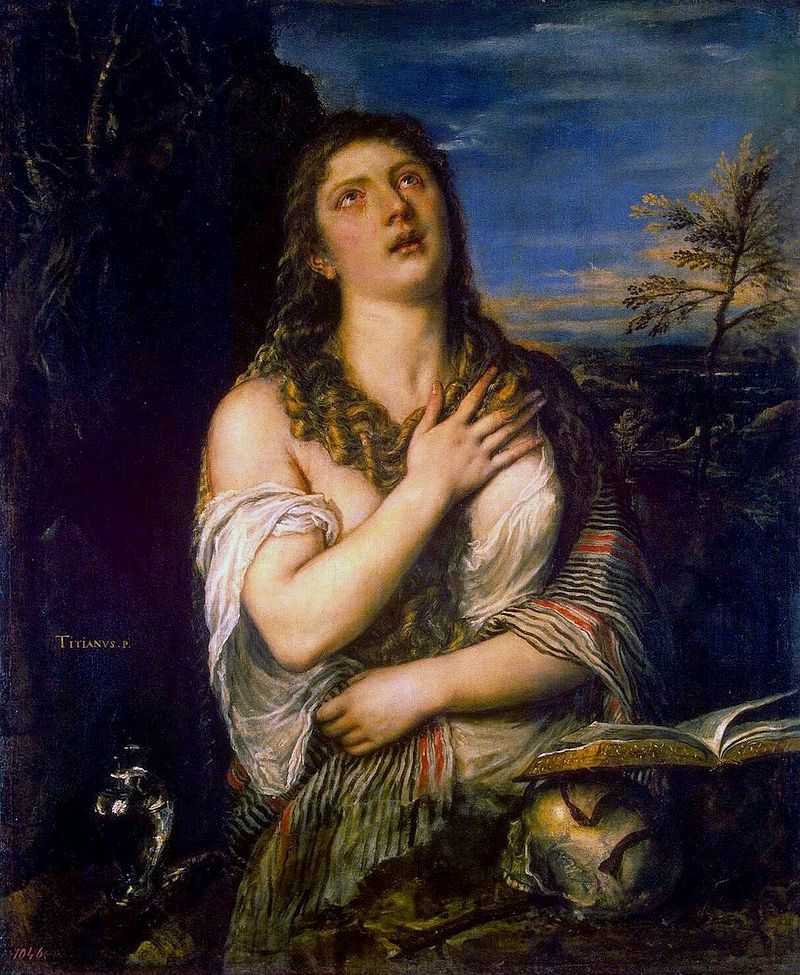 As noted in Mid-summer Travelog, I just got back from a two-week road trip.  (From Friday June 26 to Sunday July 12).  So now it’s time to get back up to speed.  I’ll do that with a post on the next major feast day.  That would be Wednesday, July 22, the feast day for Mary Magdalene.

As the Collect for her Day says, Jesus “restored Mary Magdalene to health of body and of mind, and called her to be a witness of his resurrection.”  She did that, and set an example for us all.

And she did all that despite a sordid past and a really lousy reputation.

To start off, “Mary” was an extremely common name at the time of Jesus.  This particular Mary was born in Magdala, which is where she got her name:   “Mary from Magdala,” or Magdalene.  Unfortunately it’s not clear where Magdala is, but most Christian scholars assume it’s “the place the Talmud calls Magdala Nunayya.”  (“Magdala of the fishes.”)  And the consensus is also that this is the site noted in Matthew 15:39, on what happened after Jesus fed the 4,000:

And those who ate were four thousand men, besides women and children.  [39] And sending away the crowds, Jesus got into the boat and came to the region of Magadan (below left). As Wikipedia noted, this particular Mary has long had a bad reputation.  In Western Christianity, she’s known as “repentant prostitute or loose woman.”  But the consensus now is that “these claims are unfounded.”  Consider also what Isaac Asimov said.

He first noted that Magdala is usually considered a town on the western shore of the Sea of Galilee, and may have been a suburb of Tiberias.”  He also noted this Mary “has been considered, in tradition, to have been a prostitute and to have repented as a result of her meeting with Jesus.  (Thus the “devils” in Mark 16:9 and Luke 8:2 “might then be considered devils of lust.”)

Asimov also noted some confusion that arose from the placement of the story of Mary’s “devils” coming right after the story of the woman washing the feet of Jesus with her tears and drying them with her hair.  See also Wikipedia, noting there’s long been a mix-up between Mary from Magdala and the “unnamed sinner who anoints Jesus’ feet in Luke 7:36-50:”

Mary Magdalene, the anointing sinner of Luke, and Mary of Bethany, who in John 11:1-2 also anoints Jesus’ feet, were long regarded as the same person.  Though Mary Magdalene is named in each of the four gospels … none of the clear references to her indicate that she was a prostitute or notable for a sinful way of life, nor link her with Mary of Bethany.

Asimov put it this way:  The sinner in Luke 7:36-50 “was, indeed, a prostitute in all likelihood,” but there was no direct link in the Bible between this woman and Mary Magdalene.  He added that to be “possessed by devils” – as Mary was said to be – would be considered today as “mental illness, rather than anything else.”  Thus to Asimov, Mary Magdalene would be more accurately considered “a cured madwoman rather than a reformed prostitute.”

Which may be a problem for her account of Jesus’ resurrection, as will be seen…

Yet – notwithstanding any confusion about her “sordid past” – it’s clear that Mary Magdalene showed more courage and faith than the original 11 disciples.  That’s one reason St. Augustine referred to her as the “Apostle to the Apostles.”  See also Mary of Magdala | FutureChurch:

The one indisputable fact seems to be that Mary Magdalene was both the first person to see the empty tomb of Jesus, and one of the first – if not the first – to see the risen Jesus.  (Which may have accounted for jealous males trying to  sully her reputation.)

As noted in John 20:1, “Early on the first day of the week, while it was still dark, Mary Magdalene went to the tomb and saw that the stone had been removed from the entrance.”

So she went to tell Peter and the disciple “whom Jesus loved.”  They both got there, looked inside and saw the burial clothes lying there.  (And no body.)  Then they “went back to where they were staying.”  But Mary – ever faithful Mary, who ended up with the lousy reputation – stayed there, as noted in the Gospel for her feast day, John 20:11-18.  She saw two angels, who asked why she was crying, then turned to see another man she thought was a caretaker:

Supposing him to be the gardener [as seen in the bottom painting by Rembrandt], she said to him, “Sir, if you have carried him away, tell me where you have laid him, and I will take him away.”  Jesus said to her, “Mary!”  She turned and said to him in Hebrew, “Rabbouni!” (which means Teacher).  Jesus said to her, “Do not hold on to me, because I have not yet ascended to the Father.  But go to my brothers and say to them, `I am ascending to my Father and your Father, to my God and your God.’”  Mary Magdalene went and announced to the disciples, “I have seen the Lord;”  and she told them that he had said these things to her.

Which is why this Mary – from Magdala – is rightly known as the “Apostle to the Apostles.”

Or as it was put in Who Was Mary Magdalene, the “history of western civilization is epitomized in the cult of Mary Magdalene.  For many centuries the most obsessively revered of saints, this woman became the embodiment of Christian devotion, which was defined as repentance.”

So why doesn’t this Mary get much better “press” than she does?  For one thing:

…since Mary Magdalene, as a repentant sinner, is always shown in paintings with her eyes red and swollen with weeping, the word “maudlin” (the British pronunciation of “magdalen”) has come to mean tearfully or weakly emotional.

(See also maudlin – Word of the Day | Dictionary.com.)   In other words, this Mary became a bit of a cliche.  Then there’s fact – noted by Asimov – that Mary was not only the first one to see the risen Jesus, but that she was arguably the only person to have seen the risen Jesus:

[It] all might conceivably have rested entirely upon the word of one witness, Mary Magdalene…  Yet Mary Magdalene had been possessed by “seven devils.”  She had been a madwoman or, in any case, seriously disturbed, and her behavior might have remained erratic enough to give her the reputation of being “touched.”  Even if she had shown marked improvement under Jesus’ influence, the shock of the arrest, trial and crucifixion might well have unhinged her once more and made her an easy target for hallucination…  The people generally would have shrugged off anything she had to say as the ravings of a madwoman.

Which just goes to show the importance of the interactive – if not the mystical – part of your walk toward Jesus.  (Pursuant to John 6:37.)  In the end there’s simply no way to prove the existence of either God or Jesus, with enough courtroom evidence o convince the most jaded of skeptics.  In the end it all comes down to faith, and experience.

Apart from scripture, experience is the strongest proof of Christianity…   Although traditional proof is complex, experience is simple:  “One thing I know; I was blind, but now I see.”

To those who’ve interacted with God in their John 6:37 walk toward Jesus – as for example through the discipline of Daily Office Reading,it just doesn’t matter what kind of sordid past Mary from Magala may have had.  They’ve experienced the risen Jesus themselves…

The Risen Christ Appearing to Mary Magdalen, by Rembrandt  (1638)…

The upper image is courtesy of en.wikipedia.org/wiki/Penitent_Magdalene_(Titian,_1565):

For more on this Mary see also MARY MAGDALENE, Bible Woman: first witness to Resurrection, and What Did Mary Magdalene look like?

Asimov (1920-1992) was “an American author and professor of biochemistry at Boston University, best known for his works of science fiction and for his popular science books.  Asimov was one of the most prolific writers of all time, having written or edited more than 500 books and an estimated 90,000 letters and postcards.”  His list of books included those on “astronomy, mathematics, the Bible, William Shakespeare’s writing, and chemistry.”  He was a long-time member of Mensa, “albeit reluctantly;  he described some members of that organization as ‘brain-proud and aggressive about their IQs.’”  See Isaac Asimov – Wikipedia.

Re: Magdala Nunayya:  See History & Culture Archives – Tour Magdala, which noted that the term means “Magdala of the fishes,” as opposed to Magdala Gadar.  The former is the “better known Magdala,” located near Tiberias “on the shores of the Sea of Galilee.”  The latter, Magdala Gadar, is “in the east on the River Yarmouk,” the largest tributary of the Jordan River.

Re: courtroom evidence:  “The main concept behind correct evidence handling is that the item recovered is the same as that produced in the court room.”

Re: faith and experience.  See Wesleyan Quadrilateral – Wikipedia, referring to “a methodology for theological reflection that is credited to John Wesley, leader of the Methodist movement in the late 18th Century…  This method based its teaching on four sources as the basis of theological and doctrinal development, scripture, tradition, reason, and experience.”  Also, a complete quote:

Apart from scripture, experience is the strongest proof of Christianity…   Wesley insisted that we cannot have reasonable assurance of something unless we have experienced it personally.  John Wesley was assured of both justification and sanctification because he had experienced them in his own life.  What Christianity promised (considered as a doctrine) was accomplished in his soul.  Furthermore, Christianity (considered as an inward principle) is the completion of all those promises.  Although traditional proof is complex, experience is simple: “One thing I know; I was blind, but now I see.”  Although tradition establishes the evidence a long way off, experience makes it present to all persons.  As for the proof of justification and sanctification Wesley states that Christianity is an experience of holiness and happiness, the image of God impressed on a created spirit, a fountain of peace and love springing up into everlasting life.

As noted elsewhere in this blog, Jesus promises – in the most important part of John 6:37 – “I will never turn away anyone who comes to me.“

The lower image is courtesy of File: Rembrandt – The Risen Christ Appearing to Mary Magdalen.  See also On Easter Season – AND BEYOND.