Saturday, February 2, is the Feast Day of the Presentation of Jesus at the Temple: 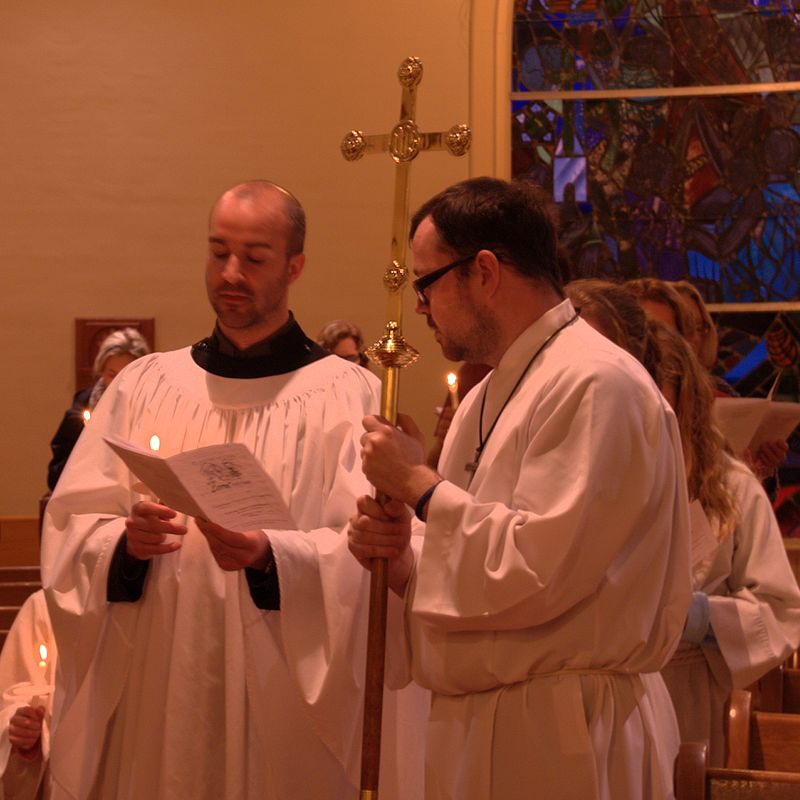 In other words, the day celebrates “an early episode in the life of Jesus,” His presentation at the Temple in Jerusalem “in order to officially induct him into Judaism.”  It’s celebrated by many Christian Churches, and is also known as Candlemas.  (As shown above right.)

There’s more later, but first a word about one of the Daily Office Readings for this February 2 Feast.  Those readings include 1st Samuel 2:3, “For the LORD is a God of knowledge.”  Which – taken together with Isaiah 27:11 – means that “therefore mercy is to be denied to him who has no knowledge.”  And that’s a bit of Bible law that may well affect the many today who label anything they disagree with – or that contradicts some cherished beliefs – as “Fake News.”

Which brings up another Daily Office Reading for the Presentation, John 8:32, “Then you will know the truth, and the truth will set you free.”  Something to think about…

And which also ties in with the fourth great theme of this blog, citing Luke 24:45:  “Then He” – Jesus – “opened their minds so they could understand the Scriptures.”

It noted this episode was described in the Luke 2:22–40, which said “Mary and Joseph took the Infant Jesus to the Temple in Jerusalem … to complete Mary’s ritual purification after childbirth.” They were there “in obedience to the Torah (Leviticus 12, Exodus 13:12–15.”

The 2017 post also expanded on Exodus 13:2.  That’s where God told Moses, “Consecrate to me every firstborn male.”  It also noted “the old-timey, ‘once-prevalent custom of churching new mothers forty days after the birth of a child.’”  That quaint custom came to be called “the churching of Women,” and it started – as far as we can tell – back in the Middle Ages.  Though rarely used today, “that quaint practice took place in ‘the good old days‘ when giving birth was a time of real and great danger for all mothers.”  (As illustrated at left.)

Fortunately, these days there isn’t such a great need for a blessing “given to mothers after recovery from childbirth,” including “thanksgiving for the woman’s survival of childbirth.”

And finally, the 2017 post pointed out this “First Presentation of Jesus” foreshadowed what might be called the “Second Presentation,” on Good Friday, as Jesus is about to be crucified.  (As illustrated in the image below.)  “The point being that from the time He was first ‘presented’ at just over a month old, Jesus’ life was one long journey to the Second Presentation.”  (On the eve of His making another ritual sacrifice, one that would literally change history…)

Which brings up a more current event.  This very morning I was listening to the audio version of Garry Wills‘ 2008 book, What the Gospels Meant.  In it Wills – this morning – discussed the “Antitheses” in Matthew Chapter 5.  Also the chapter which included The Beatitudes, after which Wills went on to discuss the topic of Murder.  As Wills translated it, “anyone who calls his brother ‘idiot!‘ will be subject to the Sanhedrin.”  (For the offense of de facto murder, according to the interpretation of Jesus.)  And of course that Sanhedrin included “the final authority on Jewish law, and any scholar who went against its decisions was put to death.”

Which brings up my experience with Facebook, where a lot of people these days are calling a lot of other people “idiots,” and worse, for the simple fact of disagreeing with them, or holding a view contrary to their own “cherished beliefs.”  (See also ad hominem- Wikipedia.)

As another aside, the president of the Sanhedrin in Jesus’ time was Caiaphas.  He was the one who accused Jesus of blasphemy, “a crime punishable by death under Jewish law.”  And thus of him it was said, “Not interested in the truth, Caiaphas preferred to destroy this challenge [of Jesus] to his beliefs instead of supporting it.”  In other words, if he lived today Caiaphas would probably say the Good News presented by Jesus was just “More Fake News.”

Something else to think about…

The upper image is courtesy of Simeon And Anna Recognize The Lord Jesus – Image Results.  See also Simeon and Anna Recognize the Lord in Jesus – Rembrandt, and the “Simeon” link in the Wikipedia article on the Presentation, or at “Rembrandtonline.”  For another interpretation, see “Simeon the Godreceiver by Alexei Egorov. 1830–40s.”

Re:  “The Lord is a God of Knowledge.”  See Ellicott’s Commentary for English Readers:

Re:  “The truth will set you free.”  See again Ellicott’s Commentary for English Readers:

Here, as in John 17:17, truth and holiness are spoken of as correlative.  The light of truth dispels the darkness in which lies the stronghold of evil.  Sin is the bondage of the powers of the soul, and this bondage is willed because the soul does not see its fearful evil.  When it perceives the truth, there comes to it a power which rouses it from its stupor, and strengthens it to break the fetters by which it has been bound.

Re:  Garry Wills.  See also The True Test of Faith, and On St. Mark’s “Cinderella story.  The latter blog-post cited a New York Times review of Wills’ book What the Gospels Meant:

Wills’ discussion of the “Antitheses,” Matthew Chapter 5, The Beatitudes and murder can be found in the 2009 Penguin Books paperback version, at pages 81 and 82.