February 4, 2015 – First the good news.  Mardi Gras is less than two weeks away.  (The image above is captioned “Mardi Gras Day, New Orleans: Krewe of Kosmic Debris revelers on Frenchmen Street.”)  The bad news – in the view of some people – is that Mardi Gras is followed immediately by Lent, a “solemn religious observance” involving some 40 days of “prayer, penance, repentance of sins, almsgiving, atonement and self-denial.” (Wikipedia.)

And incidentally, that’s not 40 days straight of “self-denial.”  You get Sundays off to enjoy whatever it is you’ll be giving up for Lent.  (Chocolate, rye whiskey, two dollar cigars, whatever.)  That will be explained in a later post during Lent itself…

In the meantime (again), I haven’t done a post on Sunday Bible readings for awhile.  Aside from Jesus “cracking wise” and Jonah and the bra-burners, the last one I did was On the Bible readings for January 18.   That last post noted the end of the 12 Days of Christmas, on January 6th.  January 6 also marked the start of the Season of Epiphany.  See Christian Resource:

For many Protestant church traditions, the season of Epiphany extends from January 6th until Ash Wednesday, which begins the season of Lent leading to Easter.  Depending on the timing of Easter, this longer period of Epiphany includes from four to nine Sundays.  Other traditions, especially the Roman Catholic tradition, observe Epiphany as a single day, with the Sundays following Epiphany counted as Ordinary Time…

As I noted in January 18, “That means the Bible readings for Sundays from now until February 15 will be those readings ‘after the Epiphany.'”  There are some exceptions however, and one of those celebrates the Presentation of Jesus at the Temple.

This Feast Day – which actually falls on February 2 – celebrates the episode in Jesus’ life described in the Luke 2:22–40.   Luke indicated that “Mary and Joseph took the Infant Jesus to the Temple in Jerusalem … to complete Mary’s ritual purification after childbirth.” They were also there “in obedience to the Torah (Leviticus 12, Exodus 13:12–15.”

See Presentation of Jesus at the Temple – Wikipedia, the free encyclopedia.  But by church rule, a Feast Day can’t be  moved back, it can only be moved ahead.  So the February 2d Presentation couldn’t be moved back to Sunday February 1.  It had to be moved forward, to February 8.

Forty days after the birth of Jesus, the Holy Family travels to Jerusalem to initiate the child into the service of God at the Temple and to offer a modest sacrifice:  the caged pigeons or turtledoves held here by Joseph [shown below, a la James Tissot].  Taking the infant into his arms, the aged priest Simeon acknowledges the child as the Christ, or Messiah.

See Brooklyn Museum: European Art: The Presentation of Jesus.  See also Feast of the Presentation of the Lord – February 02, 2015, which told of the Old Testament reading – Malachi 3:1-4 – foretelling the coming of John the Baptist:  “I am sending my messenger to prepare the way before me.”  Note also that the New Testament reading – Hebrews 2 – said that through His death on the Cross Jesus would “destroy the one who has the power of death … and free those who all their lives were held in slavery by the fear of death.”  (Something else to think about.)

In the meantime (a third time), there’s the upcoming season of Lent to think about.  It starts with Ash Wednesday, February 18, and as I noted in On the readings for Advent Sunday:

… for a time – starting about 300 A.D. – Advent was “kept as a period of fasting as strict as in Lent.”  And just as Lent today is preceded by the celebration of Mardi Gras, so back in the olden days … Advent was preceded by the “feast day of St. Martin of Tours,” in many places “a time of frolic and heavy eating, since the 40-day fast began the next day.”

As Wikipedia noted, tradition says that Lent lasts 40 days “in commemoration of the forty days” that Jesus spent, “before beginning his public ministry, fasting in the desert, where he endured temptation by the Devil.”  But again, that Lenten period of fasting and penance is preceded by the “blow-out” of Mardi Gras, thus reflecting the “rhythmic movement between the poles of fast and feast, Lent and Easter, renunciation and affirmation.”  See To Fast Again by Eamon Duffy. 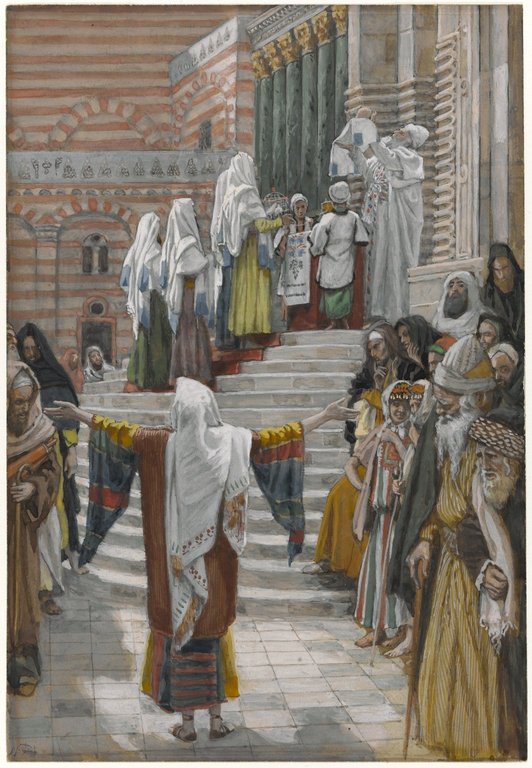 The upper image is courtesy of  Mardi Gras – Wikipedia, the free encyclopedia:

The lower image is courtesy of Brooklyn Museum: European Art: The Presentation of Jesus in the Temple, which added a commentary on some predecessors including Tintoretto:

Throughout his commentaries, Tissot refers to both historical and modern sources to demonstrate his extensive knowledge of the Temple precinct in ancient Jerusalem.  He locates the Presentation at the top of the steps that led to the altar of burnt sacrifice.  Further, he takes to task the sixteenth-century Venetian painter Tintoretto, one of his most illustrious art-historical predecessors, for inaccurately rendering the stairway, instead insisting very specifically on a shallow rise for the individual steps, as documented by the historical writers he consulted.

Re: Old-timey hit tune.  See Turn! Turn! Turn! – Wikipedia, the free encyclopedia, describing the 1962 hit by the “American folk rock band The Byrds…   The lyrics are taken almost verbatim from the Book of Ecclesiastes (late 3rd century BC), as found in the King James Version (1611) of the Bible (Ecclesiastes 3:1-8), though the sequence of the words was rearranged for the song.”  See also TURN! TURN! TURN! (Lyrics) – THE BYRDS – YouTube.