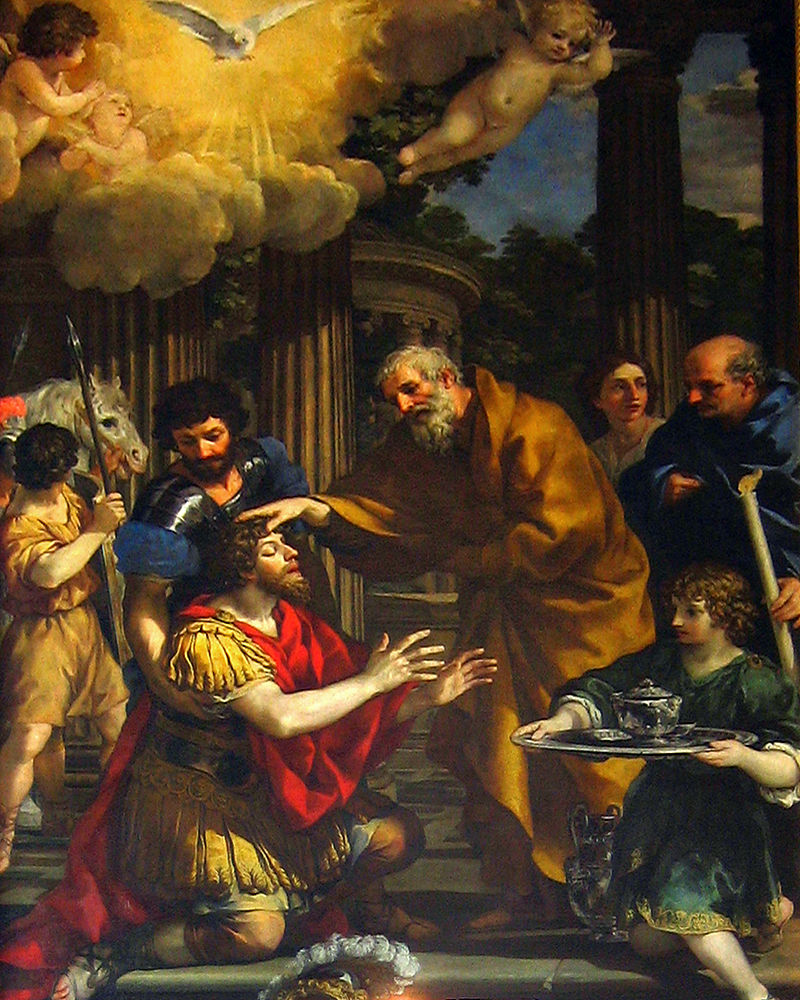 “Ananias Restoring the Sight of St. Paul” – after his Damascus road experience…

Last week’s post was Doubting Thomas – and Peter Restored. (Including the image at right.)  This week’s post is about Paul being “restored.”

He got restored from his state of “ungrace.”

As a result of that transformation, the Apostle Paul got transmogrified. I.e., changed from being the early Church’s deadliest enemy to being second only to Jesus in the history of that early Christian Church.

Note that the “Peter Restored” part of last week’s post was based on the Gospel for the Third Sunday of Easter.  (April 10.)  “That is, in John 21:1-19, ‘Jesus restored Peter to fellowship after Peter had previously denied him.'”  But one thing that post missed was the first reading, Acts 9:1-6, (7-20).  That reading told about Paul’s Damascus road experience.

And it continued the theme of being “restored to grace.”

But first it described Paul “in his former state” – of ungrace – beginning with this:

Saul, still breathing threats and murder against the disciples of the Lord, went to the high priest and asked him for letters to the synagogues at Damascus, so that if he found any who belonged to the Way, men or women, he might bring them bound to Jerusalem.

I wrote about that Pauline experience in Peter confesses, Paul converts.  (About the June 29 Feast Day that “remembers both Peter and Paul, together.”  See also St Peter and St Paul, Apostles.)

That post included the image at left, from the Conversion of St. Paul at Wikipedia.  I noted that before his Damascus road experience, Paul – originally called Saul – was a zealous “Pharisee who ‘intensely persecuted‘” the early Christian Church.

But God had other plans for him.

One example of Saul-Paul’s former life – as persecutor of the early church – was his part in the stoning of Stephen, in Acts 7:57-8:3.  (“Saul was ravaging the church, and entering house after house, he dragged off men and women and committed them to prison.”)

See also Galatians 1:13-14, where Paul wrote about his being “extremely zealous for the traditions of my fathers.”  Accordingly, he intensely “persecuted the church of God” – that is, the new Christian Church he thought heretical –  “and tried to destroy it.”

But then he had his Damascus Road Experience.  In that experience he was literally struck blind, for three days.  Accordingly, Paul was “pretty much dragged kicking and screaming into his position of authority,” within the new Christian Church he’d formerly tried to destroy.

The end result?  Paul became “no less than the ‘second founder’ of Christianity.”  (Second only to Jesus that is.)

Put another way, Paul is generally considered to be “one of the most important figures of the Apostolic Age.”

Or consider this:  “Paul’s influence on Christian thinking arguably has been more significant than any other New Testament author.”  (See Paul the Apostle – Wikipedia, with the image at right.)  So one object lesson from all this could be:  “Be careful who you persecute!”

But seriously, we now turn to the readings for next Sunday, April 17. (Which this year is the Fourth Sunday of Easter.)  Among those readings is the Twenty-third Psalm.  And that psalm deserves more discussion.

See for example Psalm 23 – Wikipedia, which prompted the painting below.

Eastman Johnson painted it in 1863, and called it “The Lord Is My Shepherd.”

Wikipedia noted the painting’s imagery, including an “African-American man reading the first part of a Bible, possibly the Book of Exodus.  He is sitting against a blue jacket, which may indicate service in the Union army.”  Then there’s also this note:

Eastman Johnson painted The Lord Is My Shepherd only months after the Emancipation Proclamation of New Year’s Day, 1863.  The image of a humble black man reading from his Bible was reassuring to white Americans uncertain of what to expect from the freed slaves. But the simple act of reading was itself a political issue.  Emancipation meant that blacks must educate themselves in order to be productive, responsible citizens.  In the slave-holding South, teaching a black person to read had been a crime;  in the North, the issue was not “May they read?” but “They must read.”

Also as to that artistic imagery, Wikipedia noted that reading man – formerly a slave – was “sitting against a blue jacket, which may indicate service in the Union army.”

That is, the reading man apparently served in the so-called “United States Colored Troops.” (Established by General Order Number 143 on May 22, 1863, )  And those troops – which included “Pacific Islanders, Asian Americans and Native Americans” – were the “precursor to the Buffalo Soldier regiments of the American Old West.”

Eastman Johnson‘s 1863 painting “The Lord is My Shepherd…”

The upper image is courtesy of Conversion of Paul the Apostle – Wikipedia, the free encyclopedia.  The full caption:  “‘Ananias Restoring the Sight of St. Paul’ (c.1631) by Pietro da Cortona.”

See also Ananias of Damascus – Wikipedia, which noted his name means “favored of the LORD.”  The actual restoration of Saul-Paul’s sight was described in Acts 9:17-19 NIV:

Placing his hands on Saul, he said, “Brother Saul, the Lord – Jesus, who appeared to you on the road as you were coming here – has sent me so that you may see again and be filled with the Holy Spirit.”  Immediately, something like scales fell from Saul’s eyes, and he could see again. He got up and was baptized, and after taking some food, he regained his strength.

Re: Psalm 23.  Wikipedia noted that the text of the psalm, “beloved by Jews and Christians alike, is often alluded to in popular media and has been set to music many times.”  The article cited a number of examples of the psalm being set to music, including Johann Sebastian Bach‘s “Cantata No.112 Der Herr ist mein getreuer Hirt, BWV 112.”

I thank Christ Jesus our Lord, who has strengthened me … putting me into service, even though I was formerly a blasphemer and a persecutor and a violent aggressor…  It is a trustworthy statement, deserving full acceptance, that Christ Jesus came into the world to save sinners, among whom I am foremost of all.  Yet for this reason I found mercy, so that in me as the foremost, Jesus Christ might demonstrate His perfect patience…  (E.A.)

Also on that note, see Galatians 4:3, in the NLT:  “that’s the way it was with us before Christ came.  We were like children;  we were slaves to the basic spiritual principles of this world.”  As to the last passage, I prefer the RSV:  that “we were slaves to the elemental spirits of the universe.”

The lower image is courtesy of Psalm 23 – Wikipedia, which included the caption noted above.  The indented quote is courtesy of The Lord Is My Shepherd by Eastman Johnson / American Art.