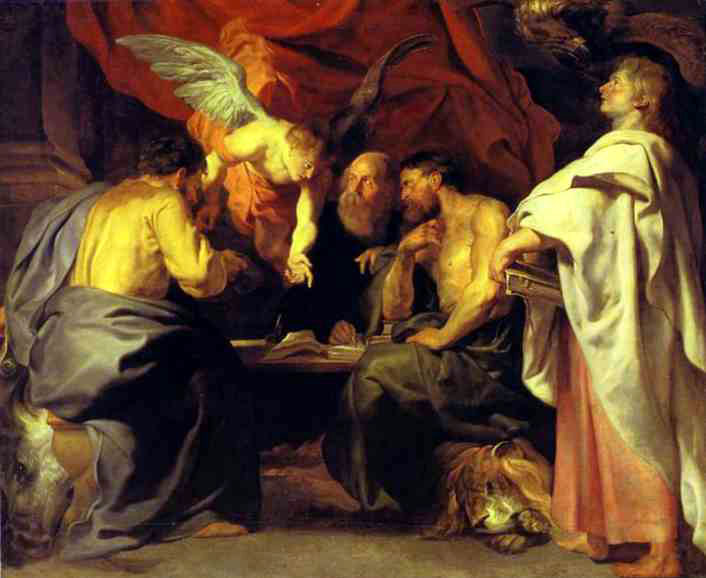 St. Mark, second from the right.  (His symbol – a lion – sleeps in the right foreground…)

This post talks about two recent Daily [Bible] Readings, and an upcoming Feast Day.  (The one for St. Mark, on Monday April 25.)  And here’s a note about the painting above.

St. Mark – second from the right – is seated directly above his symbol, a lion.  (John, author of the fourth Gospel, is at the far right, standing and dressed in white.)  I mention all this because – as noted – St. Mark’s feast day is next Monday, April 25.

But first I wanted to talk about the Old Testament Daily Office Reading for last Monday, April 18.

That reading is Exodus 32:1-20.  I first wrote about that passage in Arguing with God.

That’s when Moses went up on Mount Sinai to get the 10 Commandments from God.  But back at base camp, the Children of Israel were partying up a storm.  (Maybe since they’d just been freed from 400 years of slavery.)  Which naturally made God mad.

(Moses got pretty mad too, as shown by the image at right.)

But the point is that God got so mad that He decided to destroy the Children of Israel and start all over again, with just Moses.  In the Good News Translation of Exodus 32:10, God said to Moses:  “Now, don’t try to stop me.  I am angry with them, and I am going to destroy them.  Then I will make you and your descendants into a great nation.” (Emphasis added.)

But here’s what happened next, as detailed in the King James 2000 Bible:

And Moses besought the LORD his God, and said, LORD, why does your wrath grow hot against your people … ?  Why should the Egyptians speak, and say, For mischief did he bring them out, to slay them in the mountains…  Turn from your fierce wrath, and change from this evil against your people.  Remember Abraham, Isaac, and Israel, your servants…  And the LORD turned from the evil which he thought to do unto his people.

Arguing with God noted the difference between Moses “pleading” or “beseeching” God.  But the point is that what Moses was really doing was using his powers of persuasion to get God to change His Mind.  In plain words, you could say that Moses was arguing with God.

And that’s a concept that many Christians – including most Fundamentalists or “Conservatives” – would find highly incongruous.  And speaking of Moses, the Old Testament Daily Office Reading for Wednesday, April 18, talked about how Moses got in touch with God.  (While the ancient Hebrews spent 40 years wandering in the wilderness.)

Now Moses used to take the tent and pitch it outside the camp, far off from the camp; he called it the tent of meeting…  When Moses entered the tent, the pillar of cloud would descend and stand at the entrance of the tent, and the Lord would speak with Moses…  Thus the Lord used to speak to Moses face to face, as one speaks to a friend.

Keep in mind that Moses was writing about – and referring to – himself in the third person.

That’s writing called illeism, and I wrote about that style of writing about this time last year, in Moses and “illeism.”

But more to the point, it goes to show “just when, where and how Moses came to write the first five books of the Bible.  (The Torah.)  I contemplated that subject – as illustrated at left – in My Lenten meditation, from last February.

Among other revelations, I found that it could be argued that Moses got his idea of “One God” from his time as a Prince of Egypt.  And from the fact that Akhenaten – the Pharaoh who ruled 100 years before Moses – seems to have first introduced the idea of one God – monotheism – to the Egyptians.  (But they just weren’t ready for that idea.)

And that while Moses may have written parts of the first five books of the Bible, he may have had to rely on oral tradition for some of his history.  (See also Moses [and] the Burning Bush.)

But now it’s time to get back to St. Mark and his Feast Day.  It’s celebrated next Monday, April 25, and you can see the full set of Bible readings at St. Mark, Evangelist.

See also St. Mark’s “Cinderella story”,” from last April 25.  That post talked about how Mark’s account “is (or was) the most ‘dissed‘ of the Gospels.”  That is, for many centuries the Early Church Fathers pretty much neglected Mark’s Gospel.  (St. Augustine called Mark “the drudge and condenser” of Matthew.)  Foe one thing, his written Greek was much “clumsier and more awkward” than the more-polished writing in Matthew, Luke and John.

The result?  Mark’s was the “least cited Gospel in the early Christian period:”

But “this Cinderella got her glass slipper,” beginning in the 19th century…  That’s when Bible scholars finally noticed the other three Gospels all cited material from Mark, but “he does not do the same for them…”  And as a result of that, since the 19th century Mark’s “has become the most studied and influential Gospel.”

In other words, later scholars concluded that Mark “started the process and set the pattern of and for the other three Gospels.”  And that belated recognition – of Mark’s as the real trend-setter of the Gospels – is where the Cinderella-story metapor comes in.

Then too, ever since then people have been struggling with the idea of God, just like Jacob did…

“Jacob wrestling with the Angel…”

The upper image is courtesy of Peter Paul Rubens: The Four Evangelists, which noted:  “Rubens portrayed the four evangelists while working together on their texts.  An angel helps them…   Each gospel author can be identified by an attribute.  The attributes were derived from the opening verses of the gospels.  From left to right: Luke (bull), Matthew (man [angel]), Mark (lion), and John (eagle).” See also Four Evangelists – Wikipedia.

The image of Moses is borrowed from On Moses and “illeism.”  See that post for the full references.

The lower image, courtesy of Wikipedia, is Jacob Wrestling with the Angel, by Alexander Louis Leloir(1865).  Leloir (1843-1884), was a a French painter specializing in genre and history paintings. His younger brother was painter and playwright Maurice Leloir.