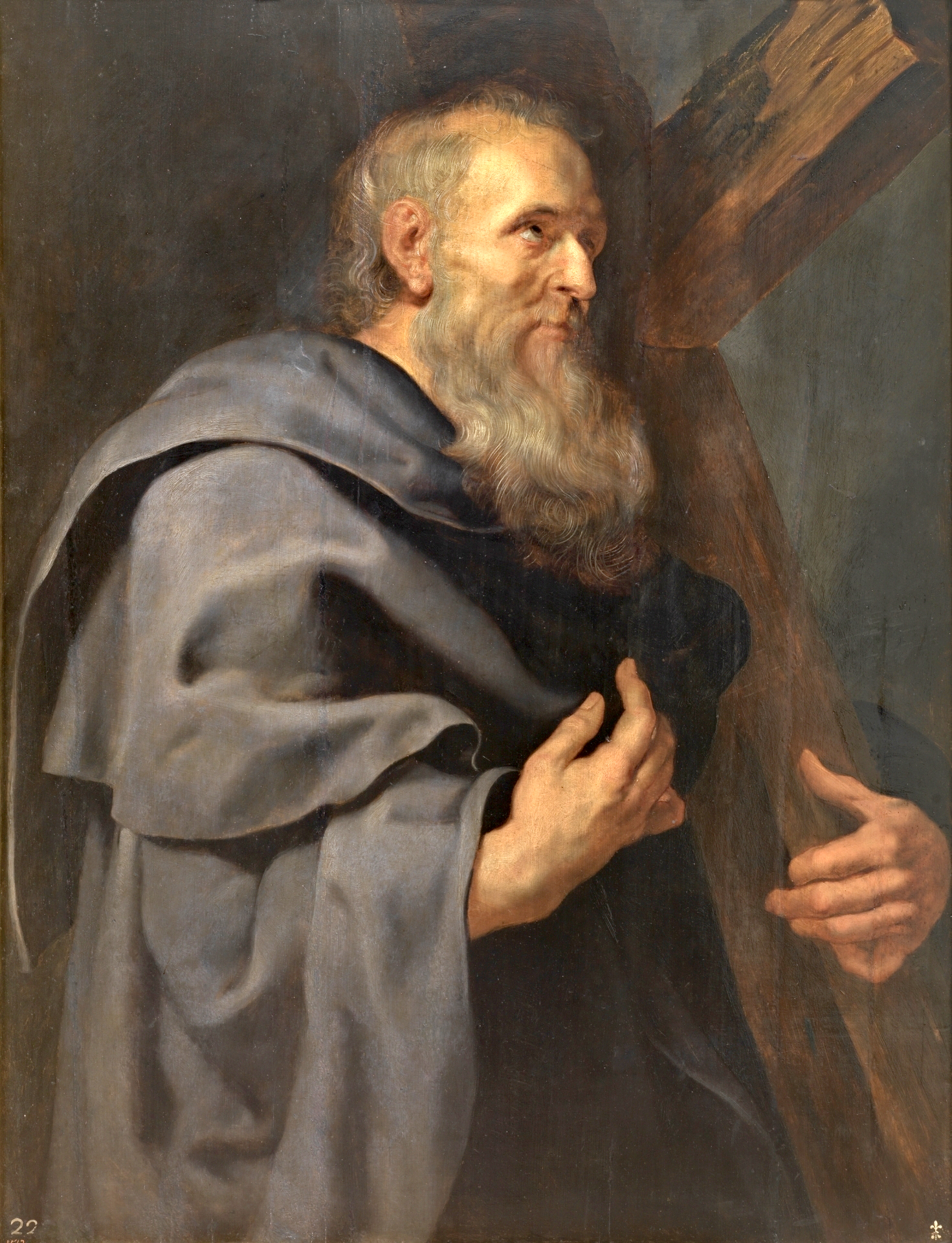 Philip the Apostle – the saint we know is being celebrated on Monday, May 2…

The next major Feast Day is Monday, May 2.  That’s the feast of St. Philip and St. James, Apostles.  It’s normally celebrated on May 1, but this year May 1 falls on a Sunday, so it got transferred.

But see also St. Philip & St. James, from Satucket.  It has a two-year cycle of Daily Bible Readings. (You get through the Bible in two years.)  And that site shows some debate on “St. James:”

The New Testament mentions at least two persons named James, probably at least three, and perhaps as many as eight.  This is as good a place as any to sort them out.

At the top of that list-of-eight is James the Greater.  (Seen at left.)

He’s also called James the son of Zebedee, and I wrote about him in St. James the Greater.  On the other hand, the americancatholic.org piece on Philip and James said the James here was the Son of Alphaeus:

We know nothing of this man except his name, and … that Jesus chose him to be one of the 12 pillars of the New Israel…  He is not the James of Acts, son of Clopas, “brother” of Jesus and later bishop of Jerusalem and the traditional author of the Letter of James.  James, son of Alphaeus, is also known as James the Lesser to avoid confusing him with James the son of Zebedee, also an apostle and known as James the Greater.

In the spiritual literature of Christianity, the concept of pilgrim and pilgrimage may refer to the experience of life in the world (considered as a period of exile) or to the inner path of the spiritual aspirant from a state of wretchedness to a state of beatitude.

On that note, the post cited a book by James Roose-Evans, Passages of the Soul: Ritual Today.

The book noted that a sense of ritual “should pervade a healthy society.”  (Apparently ours is none too healthy that way.)  The book added that a big problem these days is that we’ve “abandoned many rituals that used to help us deal with big change and major trauma.”

In turn the book called a pilgrimage a “ritual” – a ceremonial act – “on the move.”

The book also noted that a good pilgrimage can be “one of the most chastening, but also one of the most liberating” of human experiences.  Which led to the following observation, a la Dirty Harry:  “So, punk, do you feel like getting chastened and liberated?”

(For more on a chastening-liberating pilgrimage I took – back in November 2014 – see Returning from a pilgrimage – and the coming holidays.)

But getting back to St. Philip…  (We know a lot more about him.)  The post Total love – and “the Living Vine” talked about the Sunday Bible readings for May 3, 2015.  The first reading – Acts of the Apostles (8:26-40) – told about Philip and the Ethiopian eunuch:

Philip the Evangelist was told by an angel to go to the road from Jerusalem to Gaza, and there he met the Ethiopian eunuch…  The eunuch was sitting in his chariot reading the Book of Isaiah, and had come to Isaiah 53:7-8.  Philip asked the Ethiopian, “Do you understand what you are reading?”  He said[,] “How can I understand unless I have a teacher to teach me?”  …Philip told him the Gospel of Jesus, and the Ethiopian asked to be baptized.  They went down into some water and Philip baptized him.

The post also noted that as a eunuch the Ethiopian was beyond the pale – if not untouchable – from a legalistic standpoint.  That was because of Deuteronomy 23:1.   The King James Version – the Bible that God uses – puts the matter rather delicately:  “He that is wounded in the stones, or hath his privy member cut off, shall not enter into the congregation of the LORD.“

Yet Philip, guided by God’s Spirit, does not hesitate to share the good news of God’s love and salvation with this less than whole Ethiopian and to baptize him into the faith, to welcome him into the life of the Christian church.  This new faith is for all, God’s love is for every human being no matter what disability or disease or affliction has come our way.

(See “Wesley Uniting Church.”)  In other words, the point of Acts 8:26-40 – and Philip and the Ethiopian eunuch – is that God’s Love is Universal.  (See also Jonah and the bra-burners.)

So here’s to “Philip and James – Saints and Apostles,” and their Feast Day.

The upper image is courtesy of Philip the Apostle – Wikipedia.  The caption:  “St. Philip, by Peter Paul Rubens, from his Twelve Apostles series (c. 1611), at the Museo del Prado, Madrid.”  That article added:  “In the Roman Catholic Church, the feast day of Philip, along with that of James the Just, was traditionally observed on 1 May, the anniversary of the dedication of the church dedicated to them in Rome (now called the Church of the Twelve Apostles).”  A note:  “James the Just” is third on the Satucket list, just below James the Greater and James the Lesser.

The image of St. Philip and St. James together is courtesy of catholicculture.org/culture/liturgicalyear. That site indicated that the Feast Day – May 1 or 2 – honors “James the Less:”

St. James the Less, a brother of the Apostle Jude, was of Cana of Galilee.  He is the author of one of the Catholic Epistles in the New Testament.  He was favored by an appearance of the Risen Christ (I Cor. 15:7).  After the dispersion of the Apostles he was made Bishop of Jerusalem.  He was visited by St. Paul (Gal. 1:19).  He spoke after Peter at the meeting of the Apostles (Acts 15:13).

Re: Isaiah 53:7-8:  “He was oppressed and afflicted, yet he did not open his mouth;  he was led like a lamb to the slaughter, and as a sheep before its shearers is silent, so he did not open his mouth…  For he was cut off from the land of the living;  for the transgression of my people he was punished.”  The passage is said to refer to the sufferings of Christ.  See John Gill’s Exposition of the Bible.

Re:  Jonah and the bra-burners, which said the Book “ain’t about no stinkin’ whale:”

Clearly, the Book of Jonah … is the product of that school of Jewish thought which was universalist and which opposed the nationalist view…  It is the universality of God and the attribute of divine mercy that are the lessons of Jonah.  Those who think of the book as nothing more than the story of a man and a whale miss the whole point. (E.A.)

There used to be a lower image, and it was courtesy of the Wikipedia article, The Baptism of the Eunuch.