July 25 is the Feast Day for James, son of Zebedee, one of the Twelve Apostles.  According to tradition was the first apostle to be martyred, which happened somewhere around 44 A.D.

He was a son of Zebedee and Salome, and brother of John the Apostle.  He is also called James the Greater or James the Great to distinguish him from James, son of Alphaeus.

James was one of the first disciples to join Jesus (Matthew 4:21-22, and/or Mark 1:19-20), and one of only three apostles selected by Jesus to witness His Transfiguration.  One author suggested James was the first martyred apostle mostly because of his “fiery temper, for which he and his brother earned the nickname Boanerges or ‘Sons of Thunder.'” (See Mark 3:17.)

At that time prophets came down from Jerusalem to Antioch.  One of them named Agabus stood up and predicted by the Spirit that there would be a severe famine over all the world; and this took place during the reign of Claudius.  The disciples determined that according to their ability, each would send relief to the believers living in Judea; this they did, sending it to the elders by Barnabas and Saul. . .   About that time King Herod laid violent hands upon some who belonged to the church.  He had James, the brother of John, killed with the sword. After he saw that it pleased the Jews, he proceeded to arrest Peter also. (This was during the festival of Unleavened Bread.)

As always, you can see the full set of readings – and more – at The Lectionary Page.

Tradition says that James traveled to Spain, to spread the Gospel there.  (He’s the patron saint of Spain and Portugal.)  Specifically, the tradition is that on January 2, in the year 40 A.D.:

[T]he Virgin Mary appeared to James on the bank of the Ebro River at Caesaraugusta, while he was preaching the Gospel in Iberia.  She appeared upon a pillar, Nuestra Señora del Pilar, and that pillar is conserved and venerated within the present Basilica of Our Lady of the Pillar, in Zaragoza, Spain.  Following that apparition, St. James returned to Judea, where he was beheaded by King Herod Agrippa I in the year 44.

Note also that in the painting above, St. James is pictured as a pilgrim, complete with a pilgrim’s hat and walking stick in the background.  Which brings up the topic of Bible-reading on a daily basis as part of your own personal spiritual pilgrimage.   As Wikipedia noted:

A pilgrim (from the Latin peregrinus) is a traveler (literally one who has come from afar) who is on a journey to a holy place.  Typically, this is a physical journeying (often on foot) to some place of special significance to the adherent of a particular religious belief system.  In the spiritual literature of Christianity, the concept of pilgrim and pilgrimage may refer to the experience of life in the world (considered as a period of exile) or to the inner path of the spiritual aspirant from a state of wretchedness to a state of beatitude.

So your path – once you decide to “commit to Christ” or start reading the Bible on a regular basis – could also be considered a spiritual pilgrimage, not unlike the one illustrated in the painting above (complete with hat and walking stick).

As yours truly once wrote, starting your spiritual pilgrimage by reading the Bible on a regular basis “is a bit like water-skiing,” or more precisely, “a bit like grabbing the handle of the rope” attached to a metaphoric “Big Motorboat in the Sky.  (As shown below.)  Once you grab on, your main job is simply to hang on for dear life.”  To extend the metaphor further:  “What kind of ride can we expect once we grab the handle of this commitment to Christ?”  And also, “What do we do if our ‘hands’ get so tired that we let go of the handle?”

That’s pretty much what this blog is all about. 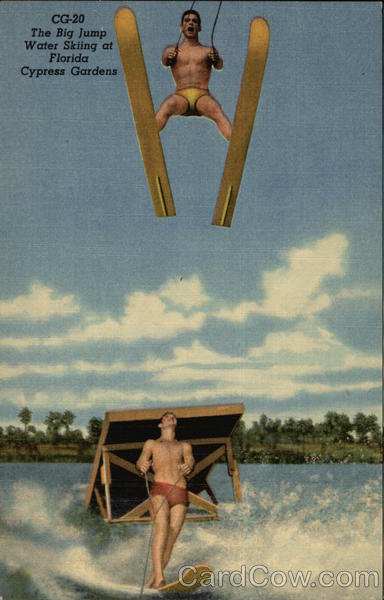 The upper image is courtesy of the Wikipedia article, with the full caption, “Saint James the Elder by Rembrandt[.]  He is depicted clothed as a pilgrim; note the scallop shell on his shoulder and his staff and pilgrim’s hat beside him.”  As to “the real Good News.”  The term Gospel is from “the Old English gōd-spell . . . meaning ‘good news’ or ‘glad tidings.’   The word comes from the Greek euangelion.”  See Gospel – Wikipedia.

The “pilgrim” link is in the Wikipedia article on St. James.   (On a related note, see More Than A Building: St. James Church – Lakewood, Ohio, and also St James, Lakewood, vis-a-vis St. James Catholic Parish, 17400 Northwood Avenue, Lakewood, Ohio.  This church was recently visited by the nice-lady inspiration for the July 15 post, On the “Infinite Frog.”  More to the point, while there the nice-lady inspiration “lit a candle” on behalf of the poor benighted Protestant soul of Yours Truly.  See also A Catholic Life: Why do Catholics Light Prayer Candles?  That link included this:  “Lighting a candle is a way of extending one’s prayer and showing solidarity with the person on whose behalf the prayer is offered.”  To which Yours Truly responds, “Thank you, I need all the help I can get!”)

As to pilgrims and pilgrimages, see also Passages of the Soul[:] Ritual Today, by James Roose-Evans (Element Books Ltd. 1994), at pages 23-25, which noted that a healthy sense of ritual “should pervade a healthy society, and that a big problem now is that we’ve abandoned many rituals that used to help us deal with big change and major trauma.  The book said all true ritual “calls for discipline, patience, perseverance, leading to the discovery of the self within.”

More to the point, the book noted that a pilgrimage – like a week-long canoe trip in the wild or a long hike on the Appalachian Trail – “may be described as a ritual on the move,”  and that in doing so – that is through “the raw experience of hunger, cold, lack of sleep” – we can quite often find a sense of our fragility as mere human beings, especially when compared with “the majesty and permanence of God” and His creation.   Finally, the book noted that such a pilgrimage can be  “one of the most chastening, but also one of the most liberating” of personal experiences.