Accordingly, it would behoove me to get familiar with those readings.

You can see the full readings at Third Sunday in Lent.

And a BTW:  The theme of that Gospel is “repent or perish.”  On the other hand, you could also say the Gospel is on a metaphoric “fig tree that bears no fruit.”  (And in turn you could say that ties in with the last post, on Conservative Christians content to stay “career buck privates.”)

You can see the full Old Testament reading at Exodus 3:1-15.  For one interpretation, see Burning bush – Wikipedia, which said “the burning bush is the location at which Moses was appointed by Adonai (God) to lead the Israelites out of Egypt and into Canaan.” 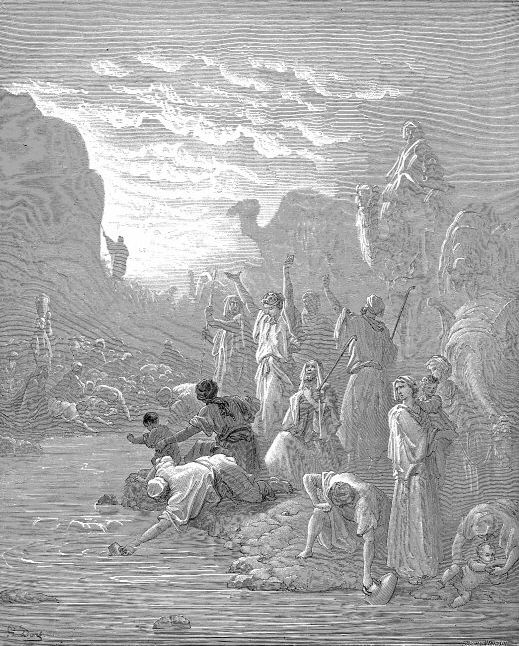 The article noted other interpretations, including that Moses “may have been under the influence of a hallucinogenic substance when he witnessed the burning bush.”

(Note also Mount Horeb – where Moses saw the Burning bush – is where he later “struck the rock” and got water, shown at right.)

And finally, the Burning bush article directed the reader to “see also” the article on Theophany.

For another take, see The great religious leaders, a 1958 book by Charles F. Potter (1885-1962).  Potter was a “Unitarian minister, theologian and author.”  In 1923-1924, he became “nationally known through a series of debates with Dr. John Roach Straton, a fundamentalist Christian.”

And for starters, Potter noted the “pre-Mosaic religion of the Hebrews was a mixture of animism and fetishism.” (43)  But that all started to change when Moses had his theophany, his experience with the burning bush. (37)  The upshot?  Moses got commissioned by God in Exodus 3:10:  “I am sending you to Pharaoh.  You must lead my people Israel out of Egypt.”

Or as Potter put it, he got the divine call to every prophet:   A “great wrong to be righted, a task to be done, and then a sudden blinding realization that the task is one’s own.” (43)

Potter noted several important factors about this theophany of Moses.  One was that in all such experiences, “the hearing of the prophet seems much more acute than his vision.” (38)  See also Exodus 3:6, “Moses hid his face, because he was afraid to look at God.”

But perhaps more important:  A “new religion does well to build on the old.” (38)  And so, during his lengthy stay with his family – in exile, in Midian – Moses may have recalled some of the things he learned during the first part of his life, when he was a literal Prince of Egypt.

That is, he may have combined the “traditions of the fathers” with some things he learned as a “Prince of Egypt.”  In doing so he went on to forge a sense of collective self in the Children of Israel.  They became strong enough to go back and re-conquer their ancient Promised Land. 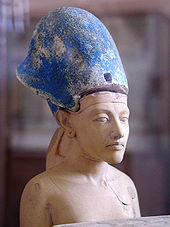 That is, Potter indicated that as such a Prince of Egypt, Moses was likely familiar with Akhenaten.  (Seen at left.)  He was the “heretic king” who had ruled Egypt a mere century before Moses. (36)

Briefly, Akhenaten introduced the idea of one God to Egypt – monotheism – but Egyptians just weren’t ready for that.  (They liked “traditional Egyptian polytheism.”  See Wikipedia.)

And so after his death the Egyptians abandoned Akhenaten‘s “new-fangled religion” and went back to their old ways.  But in the mind of Moses, Akhenaten‘s One God may have taken new form.

Recalling his suffering fellow Hebrews in Egypt, Moses may have thought this way:

The great gods of Egypt could not  be expected, of course, to help the Hebrews…  If only they had one great god to help them now!  Then Moses remembered the heretic [Akhenaten]…  [Perhaps] there was one great god, greater even than Aten.  Perhaps this unknown god had caused all things, even the sun, and really cared for suffering human beings, and would deliver the Hebrews from bondage and help them escape to some better land!

(36-37, emphasis in original.)  That was of course a nice thing to think about God.  (That “He” might redeem a nation of illiterate slaves.)  But then Moses realized this “new God” wanted him to do the “legwork.”  And so – not surprisingly – Moses protested his new assignment.  “Moses said to God, ‘Who am I that I should go to Pharaoh and bring the Israelites out of Egypt?'”

Among other concerns, Moses knew the great God of the Burning bush was not the “God of their fathers” to the Hebrews back in Egypt.  (Remember their “animism and fetishism…”)

Moses also knew that this stubborn people – his fellow Hebrews who had not been “princes of Egypt” – would not “accept a totally new God.”  (Or a new religion.)  So he had to build on the past, as shown in Exodus 6:3.  There God told Moses, “I appeared to Abraham, to Isaac, and to Jacob as El Shaddai – ‘God Almighty’ – but I did not reveal my name, Yahweh, to them.”

In other words, before Moses appeared, “God” had apparently only appeared to Abraham, Isaac and Jacob.  (And then only as El Shaddai.)  It was not until the time after Moses that God appeared to the Children of Israel as Yahweh.  And so, after his “Burning bush experience,”  Moses went on to forge a new nation from a group of exiled, illiterate slaves:

Moses made the Hebrew tribes into a nation by giving them a God … but that God was not made de novo.  With [his] wisdom in dealing with men … Moses conveyed to his people the idea of one great personal God by using concepts already at hand…  His was the task of leading a people from animism to monotheism … and he did a piece of work which deserves admiration…  [T]o Moses belongs the glory of the pioneer.

(42-43)  And it all started with that “burning bush” experience.  Which is one big reason Potter said of Moses, “His burning bush still lights our world.” (61)

So as a result of all this, I have been able to both review next Sunday’s Bible readings, and continue work on My Lenten meditation.  (See also two birds with one stone.)

Turning to Psalm 63:1-9, I reviewed it in “Patton,” Sunday School teacher:

He cursed like a sailor and believed in reincarnation, but Patton was a devout Episcopalian, as shown in the film [Patton, a poster for which is seen at right] starring George C. Scott.  For example, Patton was at a low point in his career during World War II [and] was almost sent home in disgrace, but he found comfort in Psalm 63.

Turning to 1st Corinthians 10:1-13 (ESV), it includes a passage on Moses’ Children of Israel being “under the cloud,” passing through the sea, and “baptized into Moses.”  It also includes this passage, that “No testing has overtaken you that is not common to everyone.  God is faithful, and … with the testing he will also provide the way out so that you may be able to endure it.”

And finally,  Luke 13:1-9 includes the Parable of the barren fig tree.  Not to be confused with the parable of the cursing the fig tree in Matthew 21:18-22.  Though both parables have “very similar wording,” the Luke 13:6-9 parable is about a “fig tree which does not produce fruit.”

Which arguably brings us back to Conservative Christian – “Career buck private?”

Bourdon’s work bears evident traces of his religious belief and the constant inner opposition of his Protestantism, which he was obliged to conceal, to the Catholic surroundings…  The shepherd Moses, who tended his flock on Mount Horeb, saw an angel in the burning bush. When he drew closer to have a better look and understand how the bush was aflame but not consumed, God called to him from the very centre of the flames and revealed His name to Moses, making him His chosen one.  The Lord instructed Moses to go to the Pharaoh and lead the oppressed sons of Israel out of Egypt.  Moses covered his face with his hands, since he was afraid to look upon God.

Re: “chalicist.”  See also Chalice – Wikipedia, which includes the image in the text.

The “Moses striking the rock” image is courtesy of Mount Horeb – Wikipedia.  The caption:  “Moses Striking the Rock at Horeb, engraving by Gustave Doré from ‘La Sainte Bible,’ 1865.”

References to Potter’s The great religious leaders are from the 493-page Simon and Schuster edition (NY 1958).  The book is sub-titled “A revision and updating of ‘The Story of Religion‘ in light of recent discovery and research including the Qumran Scrolls.”  Story of Religion was published in 1929.

Pages 36-43.  Part of Chapter II, on Moses, “who discovered the personality of God.”  The subtitled portions included in the quoted material include:  the Meditations of Moses; the Theophany; the significance of the burning bush; sacred localities; sacred trees and shrubs; sacred lights; not consumed; Moses protests; “Changing Gods;” and “Early Hebrew Animism.”

On a related note, in writing about Zoroaster – at page 69 – Potter said:

It is impossible for any mystic to describe his own trance temperately and accurately.  There seem to be … two common elements in these calls which come to prophets.  They all speak of a great light or flame and they are all commissioned to preach.  Paul on the Damascus road or Moses by the burning bush or Zoroaster by the bank of the Daiti – brothers all.

(That “clunk” you heard may have been a Southern Baptist going into apoplexy.)

The lower image is courtesy of Parable of the barren fig tree – Wikipedia.  The caption:  “Jan Luyken etching of the parable, Bowyer Bible.”