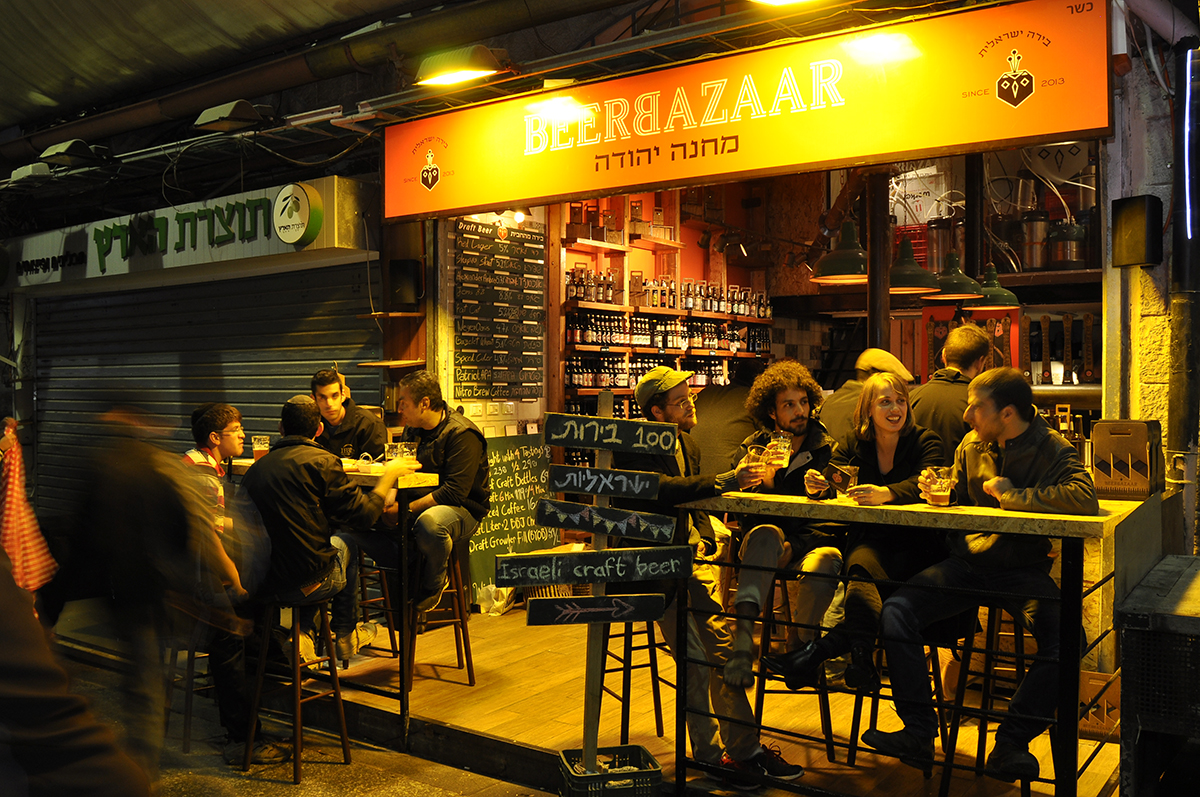 My last post – Back from three weeks in Israel – discussed just returning from 18 or 19 days (depending on time-change calculations) in the “Holy Land.”  I’d taken part in a course at St. George’s College, the “Palestine of Jesus.”  The photo at right shows the bell tower, looking west from the balcony of my room.

But that last post talked about the end of the trip.

It talked about “the most recent ‘cluster’ – half a word – part of the pilgrimage.”  (The day I flew home – Wednesday, May 29 – which began by “getting lost in Tel Aviv,” then spending 26 hours without sleep – for reasons including the time change – before I got back home.)

This post will detail the beginning of the trip, from the time I arrived at Ben Gurion airport.

I flew over with a group of nine – of the 20 or so people from our local church.  (All told there were 40 people in the “Palestine of Jesus” course, from other places like Australia, Canada and England.)  For starters, we’d all been prepped to expect the worst from the vaunted Israeli airport security.  But lucky for us, the College sent a shuttle driver, complete with a sign, “St. George’s.”  From there the driver waltzed us through security and on to our shuttle bus.

There was a bit of a problem finding my lodging.  (We got there the evening of Saturday, May 11, so I’d had to get lodging for the two nights before the course started, on Monday evening, May 13.)  The driver found Al Isfahani Street all right, but had no clue as to the whereabouts of “Herod’s Guest House.”  (Near Herod’s Gate, at left.)  But he eventually called the number on my reservation sheet, and shortly after that the proprietor met us and walked me “home.”  (The sign was pretty well hidden.)  Once settled, I wandered up and around to the namesake Herod’s Gate, looking for a cold beer, but had no luck.

Then came these thoughts – from the middle of the night – which I posted on Facebook:

Later on I woke up at 10:30 a.m. local time (3:30 a.m. ATL time), after finally getting back to sleep.  Then I wandered up Saladin* Street and eventually found out where I’m supposed to be Monday evening.  (The Pilgrim Guest House that is, not the Cathedral or the School.*)

But I had a tough time finding a place to get a snack, or coffee – nobody seemed to speak English – but did stop at one little shop and got a “Tapazina Mango soft drink.”  Then I headed out “No’omi Kiss and Ha-Neviim” streets.  I was trying to find the bars I’d located – before I left – on Google Maps.  And hopefully some place to eat that “talked American.”

I wandered around – starting near the Old City and on up Jaffa Street – from 12:30 to 5:15 p.m. local time.  Eventually I got over and onto Ha-Neviim Street and west on Jaffa Street, up as far as Sarei Israel Boulevard.  (Close to where Herzl comes in to Jaffa.)  There I found a liquor store at Davidka Square, seen at right.  I asked about a draft beer, but the guy indicated – in Hebrew – that I could only buy a bottle.  The one I got turned out to be a Belgian ale.  (With cherries and cherry juice in it; not bad).  I also got an Oreo ice cream sandwich.

The combo wasn’t bad but I thought, “I came all the way to Israel just to get a frikkin’ Belgian ale?”  This was about 2:00 or so, and the ice cream was the only thing I’d eaten all day.

Along the way I stopped at a bank and got 200 New Israeli Shekels, which would help with haggling.  Then once I headed back from Sarei Israel, I found the place called “BeerBazaar.”  It’s close to Jaffa Street – “at Etz Hayyim 3” in local-ese – AND IT WAS KOSHER!

That turned out to be quite a treat.  I got two glasses of a “Negev” Israeli beer and an order of Hummus Olei Zion.  The menu said it was a “timeless Israeli dish to complement your Israeli beer.”  So I sat happily at my high-top table just outside the front door – after all that hiking and checking my street-map periodically – and watched the street life passing by.

The hummus, pita bread plus a side of sweet pickles and olives were pretty filling, and it cost a mere 33 shekels.  (About 11 dollars, including the two beers.)  I saved two slices of bread for later, as necessary.  (I finally threw the bread away some days later, at St. George’s.)

Then I came home and took a nap until about 7:00.  I was hoping the jet lag had been whipped, but then I heard another “explosion,” about 7:33 p.m. local.  I later found out those explosions were mere souped-up firecrackers.  (The Israelis won’t let the Muslims fire a real cannon.)  And they were merely alarm clocks, for Ramadan.  (As illustrated below left.)

Later on that busy Sunday, May 12, I hiked up to St. George’s again, but the front gates were all locked up.  Which was good for security, but didn’t do me any good.  (I wanted to see if any other pilgrims from St. Andrews had arrived.)  But from there I shunted over to the Leonardo Moria Classic hotel, a mere .2 (point 2) miles to the west.  It was pretty swanky, AND it had a bar.  And a piano bar – some guy playing piano – at that.

There I got a short Heineken’s first, mostly because I couldn’t read the other two draft-beer choices.  But after further questioning and banter with the bartender, it turned out that one of the other draft choices was the Maccabee Israeli beer I’d heard so much about.

It turned out to be mostly old people in the bar area, but still interesting to watch the local give-and-take, and while enjoying the piano playing.  After that I wended my way home, back to Herod’s Guest House on Isfahani Street, after two beers and kibbutzing at “the Leonardo.”

I’d just come in the guest house when I met “Greta,” doing some laundry.  Despite the German name, it turned out she was from Italy.  She was there as an exchange student and staying at Herod’s awhile to write a book.  So I offered that maybe I could visit her some time over the next two weeks, and maybe we could have a Starbucks and discuss international politics…

Looking ahead, to our visit to the Wall of Separation…

The upper image is courtesy of Beerbazaar – Image Results. The image came with an article, dated December 2015 and titled, “Beer Bazaar comes to Jerusalem.” The lead paragraph began: “Jerusalem must have done something right.  A few weeks after the opening of the Beerateinu beer specialty store on Yanai Street, a branch of the Beer Bazaar from Tel Aviv has opened in the Machane Yehuda market.” See also the business site, BeerBazaar. A note, “Etz Hayyim 3” is near the intersection with Jaffa Street, part of the “Mahane Yehuda Covered Market.”

Re:  “Bars I found – before I left – on Google Maps.”  The subject of a future post, “The nightlife in Jerusalem.”  A side note:  I never did find the Hataklit Bar, which ostensibly offered karaoke.  It’s at “Heleni ha-Malka Street 7,” which definitely sounds Hawaiian, and may be why I never found it.

Re:  “The Pilgrim Guest House … not the Cathedral or the School.”  I discovered the difference around mid-day Sunday, the 12th.  Looking for the guest house, I wandered into the school area across Nablus Street.  Some Turkish-looking guy gave me a look that indicated “what the hell are you doing here?”  He didn’t speak English and I didn’t speak whatever he was talking.  However – perhaps taking pity – he DID make me a cup of strong Turkish-style coffee.  We sat in comradely silence while it was brewing, then he handed me the coffee and bid me adieu, after which I found the guest house.

Later that evening, I was walking back to Isfahani Street after my two beers and kibbutzing at the Leonardo bar.  (Catty-corner to St. George’s, about a two-minute walk.)  There’s a St. George’s gift shop on Nablus, across from the gated “Pilgrim” complex.  And who should be walking out the gift shop but the same friendly guy who made me a cup of coffee that morning?  So we waved at each other and a gesture of international friendship was thereby made.

I figured there was some kind of lesson there...

Re:  Davidka Square.  The photo shows only a part of the Square, which memorializes the “Davidka,” a jury-rigged mortar:

In the early stages of the War of Independence [in 1948], the Israeli army had no artillery other than a primitive, homemade mortar that was not accurate but that made a thunderous explosion.  The noise from this weapon – called the Davidka (“Little David”) after its inventor, engineer David Leibovitch – often sent the enemy fleeing in panic…  The Israeli army used the Davidka exclusively until July 1948, when it was able to acquire conventional artillery such as mountain howitzers, cannons and field guns.

Above left is a better view of the Square, at night, with its benches and adjoining stores.

The “Ramadan” image is courtesy of Ramadan Cannon – Image Results.  The image is accompanied by a Tom Powers — VIEW FROM JERUSALEM article, “Jerusalem’s Ramadan Cannon, Then & Now.”  The article includes a description of the photo at issue, dated 1918, “from a personal album compiled by John D. Whiting of the American Colony.”  The photo features “Gordon’s Calvary, a hilltop just northeast of Damascus Gate.”  Further, it looks “east toward the Mount of Olives-Scopus ridge, [and] the people pictured are locals in traditional dress.”  (“Gordon’s Calvary” is also known as the Garden Tomb or the “rock-cut tomb in Jerusalem, which was unearthed in 1867 and is considered by some Christians to be the site of the burial and resurrection of Jesus.”  See Garden Tomb – Wikipedia.)

The lower image is a photo I took…  The “Wall of Separation” is also called the Israeli West Bank barrier, i.e., the “separation barrier in the West Bank or along the Green Line.  Israel considers it a security barrier against terrorism, while Palestinians call it a racial segregation or apartheid wall.”  Some 440 miles long, it “cuts at times 18 kilometres (11 mi) deep into the West Bank, isolating about 9% of it, leaving an estimated 25,000 Palestinians isolated from the bulk of that territory…  The barrier was built during the Second Intifada that began in September 2000, and was defended by the Israeli government as necessary to stop the wave of violence inside Israel that the uprising had brought with it.”  As a side note, “The International Court of Justice issued an advisory opinion stating that the barrier is a violation of international law.  In 2003, the United Nations General Assembly adopted a resolution that stated the wall contradicts international law and should be removed; the vote was 144–4 with 12 abstentions.”  (Wikipedia.)

And I never did see Greta again…