Thursday August 15 was the Feast Day of St. Mary the Virgin, as celebrated in the Episcopal Church.   See August 2014’s St. Mary, Mother, and also Mary (mother of Jesus) – Wikipedia:

She is identified [as] the mother of Jesus through divine intervention.  Christians hold her son Jesus to be Christ (i.e., the messiah) and God the Son Incarnate.  Mary (Maryam) also has a revered position in Islam, where a whole chapter of the Qur’an is devoted to her, also describing the birth of Jesus. . .   [She] is considered by millions to be the most meritorious saint of the Church.  Christians of the Catholic Church[,] Anglican Communion, and Lutheran churches believe that Mary, as Mother of Jesus, is the Mother of God and the Theotokos, literally “Bearer of God.”

For starters, we arrived Saturday night and the driver from St. George’s got us quickly through the dreaded Israeli security at Ben Gurion airport.  But then had a tough time finding my lodging on Al-Isfahani Street.  Later, after settling in my new room, at 4:10 that morning I heard what I took to be an explosion.  It was actually a cannon, marking the start of another day of Ramadan.  (The idea is to give people a chance to eat and drink before the all-day fast.)

That Sunday I wandered Jaffa Street and found a great place to eat, the BeerBazaar. 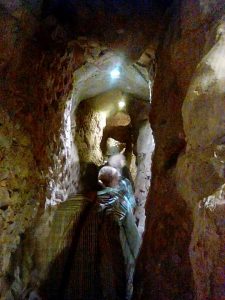 About noon Monday I hooked up at the St. George’s Pilgrim Guest House and met up with my fellow course pilgrims. (Including the nine I flew over with.)  Tuesday featured lectures, orientation and a walk to the Pool of Bethesda in the Old City.  On Wednesday we visited the southeast part of the wall around the Old City.  (The “City of David,” from where we could look east across Kidron Valley to the Mount of Olives.)  We slithered through Hezekiah’s tunnel – shown at right, it’s very long, dark and damp – and came out at the Pool of Siloam.  Then we visited the Hasmonean tombs.

That afternoon I took off.  The group was scheduled to visit the Holocaust Memorial.  However, I was familiar with that episode of man’s inhumanity to man from my youthful studies in Judaica.  (Including – in 1969 – considering the Israeli Army as an alternative to the draft.)  So I wandered back to Davidka Square  – and the liquor store I found Sunday.  I got a bottle of Sommelier, for some brandies-and-water back in my room at night.

Thursday May 16 we visited Ein Kerem, the Church of the Visitation and Mary’s spring.  After lunch at the “Tent Restaurant, Beit Sahour,” we visited the Church of the Nativity and St. Jerome’s chapel and tomb, both in Bethlehem.  The church was both packed and crowded.

There we stood a long while, waiting to do a hump-through-a-tunnel extension of the tour.  It was then I noticed a fellow pilgrim in danger of getting stressed out by all the crowds and noise.  So I did a Good-Samaritan thing – kind of – and persuaded him to join me at the garden restaurant next door – and have a prophylactic Taybeh (Palestinian) beer.  I wrote later:

In situations like this you have to pick your battles.  It’s always seemed to me that finding a spiritual “pilgrimage” breakthrough usually comes in relative solitude, not when you’re surrounded and jostled by hordes of hot, sweaty and pushy “fellow travelers.”

Speaking of which, the theme of the Visitation to Mary was “Mary responding to the prompting of the Holy Spirit to set out on a mission of charity.”  But I didn’t see a whole lot of charity in the visit we made at the END of the day.

That is, we ended the day at the Wall of Separation, also known as the “Israeli West Bank barrier.”  And in a bit of sarcasm – or irony – we stopped at the “Walled Off Hotel.”  (Shown above left.  Luckily, the hotel included a bar, where I enjoyed another Taybeh Palestinian beer.)

See Banksy′s hotel with ′the world′s worst view′ opens in Bethlehem, which said this:

“With a play on words on the luxury Waldorf Astoria chain, this place is called the Walled Off Hotel, because it was built almost immediately next to Israel’s separation wall in the Palestinian-ruled city where Jesus Christ was born.”

Which of course would be Bethlehem, where Jesus was born and “God’s love, mercy, righteousness, holiness, compassion, and glory” were expressed in Him.

But seeing the Walled-off Hotel in His birthplace, I didn’t know whether to laugh or cry.

Later that night I had a first experience doing wash-and-wear clothes in the shower, then taking them to the rooftop terrace to hang them out to dry.  During the day it gets “hot as Gehenna” in Jerusalem, but at night it’s generally quite pleasant.  Cool and breezy, “Up on the Roof…”

Then I had my shot or two of brandy and water.

Later still I did some reflecting on the day, and especially the last visit.  I was tempted to conclude that the road to both freedom and spiritual enlightenment seems to be littered with dumbasses along the way.  But hey, that wouldn’t be Christian…

And for those thinking that my free-time was focused ONLY on swilling beer:  I was also doing a weekly overseas alternate exercise program.  (In what free time we had.)  Specifically, a week’s quota of two hours of yoga (1.86) and four hours of calisthenics (3.8), for a total of five hours and 40 minutes.  Plus 500 half-pushups (making adjustments for being old), and 1,000 (that’s ONE THOUSAND) ab crunches.  So I wasn’t ONLY swilling beer in my spare time…

That covers the Jerusalem visit to Friday, May 17, when we visited the Judean wilderness, the Jordan River and Jericho.  (Modern and ancient Jericho, “Tel es-Sultan.”)  I’ll be writing more on my visit to Israel from that point on, but first I have to get ready for my visit to Portugal…

Where hopefully I won’t find any “Walls of Separation…” 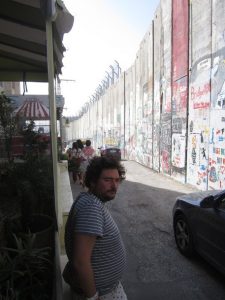 That look about says it all…

The upper image is courtesy of Mary (mother of Jesus) – Wikipedia.

The Mary’s image at the start of the main text is courtesy of Mary’s Spring Ein Karem – Image Results.

The quote on Jesus, Bethlehem and “Walled-of” is from Deep Significance of the Birth of Jesus Christ.

Re:  “Overseas pilgrimage in under two weeks.”  I fly to Lisbon on August 28.