Moses at Rephidim:  “If I let my arms down, the other team will win!“

Tuesday, January 13, 2015 – With Ohio State’s victory last night, the 2014 college football season came to an end.  That means among every other set of college-team fans – aside from Ohio State’s – there will be some who ask, “Why did my team lose?   What did I do wrong?”

Devoted fans love to think if their team wins, they – the fans – helped out.  (Through their rituals, “lucky shirts” and the like.)  See “God’s Favorite Team” – Part II:  “It’s a natural tendency for people to make connections between events.  ‘When I do this, that happens…’  Primitive people [and perhaps modern football fans] developed superstitions in similar ways.”

The flip side is that today – among every set of fans except Ohio State’s – there are some who feel guilty for “jinxing” their team.  And among Ohio State’s fans there will be some who say – quite confidently – “My team won because of what I did.  Ohio State won because I [fill in the blank].  To see some examples check out On “God’s Favorite Team” – Part I], which added:

Superstition is a large part of a fan’s repertoire these days, especially when the home team is in Super Bowl XLVIII today…   Kenny Shisler has similar superstitions.  The lifelong Broncos fan said he will wear Broncos gear all week long, but refuses to do so on game day… “Like the Bud Light commercials [say], ‘It’s only weird if it doesn’t work…’”

Emphasis added, with the emphasized part referring to last year’s Super Bowl.  For those who don’t remember, that was an example of Bronco-fan superstitions not working.  Which is another way of saying that when their team loses, lots of fans feel somehow guilty about it.

Of course there are some who think all this superstition is really weird.  But as it turn out, today’s fans are just following the example of Moses at the Battle of Rephidim.  That’s when Israel pulled off their first big upset of the season, over the “hated arch-rival, the dreaded Amelikites:”

Moses, Aaron, and Hur went up to the top of the hill.  [Essentially, to “watch the game on wide-screen.”]  Whenever Moses held up his hand, Israel prevailed; and whenever he lowered his hand, Am′alek prevailed.  But Moses’ hands grew weary; so they took a stone and put it under him, and he sat upon it, and Aaron and Hur held up his hands … so his hands were steady until the going down of the sun.

That’s where I come in.

I started my spiritual journey that led to this blog back in the summer of 1992.  That’s when I started reading the Bible on a daily basis – using the DOR – and also started fine-tuning my exercise “ritual sacrifice.”  Ever since then I’ve kept on searching for the functional equivalent of Moses holding his hands up at the Battle of Rephidim.

It’s been a roller-coaster ride, but in the process I’ve learned lots of valuable lessons in ten trips through the Bible.  One of those lessons is that sometimes “winning” gets in the way of spiritual development.  Put another way the question might be, Why do the most intense periods of spiritual growth always seem to come after a disaster?

I explored this subject in God’s Favorite Team, the novel.  See the notes at For a book…

God’s Favorite Team is the story of an “ordeal and triumph…”   The ordeal … came in the ‘dark days after The Great FSU Loss to the Gators in the 1997 Sugar Bowl…’  Through it all, the Teller of This Story [looks] to the Bible for guidance on how to overcome the trauma of such defeats, and ultimately to learn and grow from them.

Then too, the book explored “the mystery of ritual on the part of football fans in general, and how – through such ritual ‘in the proper manner’ – those fans can grow and develop.”

So what lessons might be gleaned from God’s Favorite Team being humiliated on national TV on January 1st?  For myself, in doing my ritual “exercise sacrifice” – in the week before the game – I seem to have overplayed my hand.  I put in too much time doing too much exercise.  In essence I seemed to believe that I could earn that second title, and that’s always a temptation you’ll run across during your spiritual pilgrimage.

In doing so I may have disregarded the ancient wisdom: “dance with who brung ya.”  See “Dance with the one who brung you,” noting that while the phrase was popularized by University of Texas football coach Darrell Royal, it originated in a song popular in the 1920s.

Or I may have simply ended up doing the functional equivalent of Moses dropping his hands during the Battle of Rephidim.  During the season I got into the habit of not watching GFT‘s games, feeling too old for such aggravation.  But then for reasons too complicated to explain, I had to watch the ACC title game, and in doing so may have somehow “messed up the mojo.”

But in the end I probably can’t put it any better than what Brian Banks said:

“I do know that what I’ve been through has been an experience for me, but I feel it’s also a platform for some higher purposes.  Whether its people in the same situation I’m in, whether it’s people who can’t get  past some tragic incident or just people who need hope, I know there’s a reason for all of this.  It’s not just football.

So, my team lost, but we’ve been here before and come back.  I’ve written three posts on the subject of this humiliating loss, and tried to learn from it.  But now it’s time to move on.

From where the sun now stands I’ll mention it no more forever.   I’ll get back to my routine, mostly writing about the Bible readings for next Sunday.  So, along with Forrest Gump:

That’s all I have to say about that! 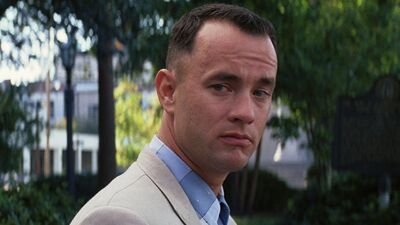 The upper image was borrowed from On “God’s Favorite Team” – Part II, and in turn is courtesy of Rephidim – Wikipedia, the free encyclopedia.  The full caption:  “Moses holding up his arms during the Battle of Rephidim, assisted by Hur and Aaron, in John Everett Millais‘ Victory O Lord! (1871).”

Re: “Dance who brung ya.”  See also Thisness of a that: You’ve got to dance with the one who brung ya, and What does “dance with the one the one that brung ya” mean?  The latter noted in part the phrase “means you are loyal to the person who got you into your position even if that person is in disfavor and you would benefit yourself by turning against him/her.”  A valuable lesson indeed.

Re: Brian Banks.  The quote is from Sports Illustrated, Volume 116, No. 24, June 11, 2012, at pages 13-14, “Back to His Future?”   The subtitle:  “Exonerated after five years in prison, former USC recruit Brian Banks looks to the NFL.”  I discussed Banks’ case in On Jameis Winston’s future, in partial response to one Jameis-basher’s claim that the “odds that you will be falsely accused of rape are basically the same as the odds that you or someone in your family will be struck by lightning.”  For the latest on his case, see Brian Banks takes job with NFL front office – NFL.com.

And finally, see also It’s Time For FSU and its Fans to Embrace the Role of the Villain:

The media has had an agenda to cover all issues that are even vaguely related to FSU in a manner that shows the school in a negative light.  The most notable example of this is the coverage of the sexual assault allegations against the Heisman trophy winner.  Jameis Winston was simply accused, he was not charged.  Although there are indications of mishandling on the part of FSU and the TPD in this case, there is also a bevy of evidence that points towards the allegations against Winston being false.

As to The Scribe’s vastly enjoying last night’s national title game, see The enemy of my enemy is my friend – Wikipedia.  On a related note see also Imprecatory Psalms – Wikipedia, the free encyclopedia, to be the subject of a post in the near future…