Remember the parable of the “Blind men and the elephant?”  The moral of the story was that each man ended up with a pretty good idea of what part of the elephant was like.  But then each man went on to “err greatly,” as Jesus might say.

Each man mistakenly assumed his was the only accurate picture of the whole elephant.

(As Wikipedia said, “the parable implies that one’s subjective experience can be true, but that such experience is inherently limited by its failure to account for other truths or a totality of truth.”)

On that note see Reading the Bible, which included a discussion of the same parable.  One conclusion:  If those six blind men had only gotten together and compared notes, they would have had a much better idea of what the elephant was really like…

Also on that note:

In the week leading up to May 9, I was finishing “Job the not patient” – REDUX.  (About the Book of Job and how hard it is to understand.)  The post explored things like “why bad things happen to good people.”  One conclusion borrowed from Professor Timothy Shutt was that in the final analysis, our human minds are just too limited to ever fully understand “God:”

We are simply not up to the task, not wired for such an overload.  We are no more prepared to comprehend an answer than – to make use of a memorable example – cats are prepared to study calculus.  It’s just not in our nature.

The strange thing is that Shutt’s analysis recalled a passage from a book I’d read years before.  That book was Hunter Thompson’s Hell’s Angels: A Strange and Terrible Saga.

It took me awhile to find my copy and run down the passage.  You can find it on page 182 of the Ballantine Trade Edition, published in 1996.  It’s in Chapter 16, as part of Thompson’s account of the “Hoodlum Circus and The Statutory Rape of Bass Lake.”   (An FYI:  That section-title was an example of pure journalistic hyperbole.)

The passage in question concerns an Angel, “Magoo,” a 26-year-old teamster from Oakland:

One night in Oakland, Magoo and I got into a long conversation about guns.  I expected the usual [talk about] “shoot-outs” and “cooling guys with a rod,” but Magoo talked more like a candidate for the Olympic pistol team.  When I casually mentioned man-sized targets, he snapped, “Don’t tell me about shooting at people.  I’m talking about match sticks.”  And he was.  He shoots a Ruger .22 revolver, an expensive, long-barreled, precision-made gun that no hood would ever consider.  And on days when he isn’t working, he goes out to the dump and tries to shoot the heads off match sticks.  “It’s hard as hell,” he said.  “But now and then I’ll do it just right, and light one.”  (E.A.)

All of which is another way of saying that in his pursuit, Magoo didn’t have ulterior motives.

That in turn reminded me of what a female Muslim mystic once said:

(See Three suitors (a parable), with the image at right.)  In other words, in trying to shoot the head off a match stick – and on rare occasions even lighting one – Magoo wasn’t going for a prize.  (A bribe, if you will.)

My point is that maybe we practicing Christians would be better off trying to approach God in the same way.  (That is, with a little more respect and a lot less greed.)

All of which brings us back to “why bad things happen to good people.”

But real life just isn’t like that.  And that brings us back to Professor Shutt. 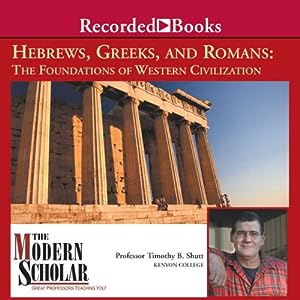 I was listening to Lecture 11 – on Virgil – in Shutt’s course-on-CD: Hebrews, Greeks and Romans:  Foundations of Western Civilization.  He said it was hard to know what “religion” Virgil followed, but the Roman was “clearly a man of deep religious sensibility, an anima naturaliter Christiania or ‘naturally Christian soul’ as the thinkers of the Middle Ages would have it.”

Virgil’s fundamental view of the world was of a “divine order at work in the world, with real but limited control of things.”

Shutt said this was a “peculiar way of looking at things,” in that most people – today and throughout history – see religious matters in terms of black or white:  “our attitude toward the possibility of divine control of things tends to be all or nothing.”

That is, most people say either there’s a God who controls all things, or that there must be no God at all.  (That “chance or strictly natural forces give rise to all that we see around us.”)  But Shutt said Virgil crystallized his spiritual “sense of things” in the Aeneid‘s Book III:

Divine order could be seen in some things, but other things more or less just happened.  This is not a view we tend to share, but it does make a certain sense.  That is the way that things often appear to be working – some of what happens seems to make sense[,] and some of what happens seems to make pretty much no sense…  There is, in other words, an overarching order at work in the world, a final coherence in the way that things work.  But it remains out of human reach, and despite our efforts, we can merely come to know it only in part…

All of which brings up another, possibly healthier way of approaching God.

For one thing, you might want to realize that you are trying to deal with The Force that Created the Universe.  You might also want to realize that “He” (anthropomorphism) doesn’t owe you a thing.  Or as Jesus Himself put it in the Daily Office Gospel reading for Monday, June 1:

“Who among you would say to your slave who has just come in from plowing or tending sheep in the field, ‘Come here at once and take your place at the table’?  Would you not rather say to him, ‘Prepare supper for me, put on your apron and serve me while I eat and drink; later you may eat and drink’?   Do you thank the slave for doing what was commanded?  So you also, when you have done all that you were ordered to do, say, ‘We are worthless slaves; we have done only what we ought to have done!’”

That’s Luke 17, verses 1-10, which serves as a reminder that Magoo-from-Frisco, Rabia Basri and the Roman poet Virgil all have some good thoughts on issue under consideration.

From Magoo we can learn that maybe we shouldn’t expect God to cater to our every whim, like some glorified butler.  Maybe we should start saying, “It’s hard as hell, but now and then I’ll do it just right…”  From Rabia Basri we can maybe learn to start worshiping not to get anything, but rather “asking nothing but to enjoy God’s presence.”

And finally, from Professor Shutt we might possibly realize that God is not “black or white, all or nothing.”  We can realize that while there does seem to be an “overarching order at work in the world,” much of it remains out of human reach, far beyond our mere-human understanding.

And maybe – just maybe – we can realize that “cats just aren’t wired to study calculus.” The poet Virgil, reading the Aeneid to a “royal” audience…

The upper image and Hell’s Angel Motorcycle Club insignia are courtesy of Hells Angels – Wikipedia, the free encyclopedia.  The caption for the top image:  “This B-17F, tail number 41-24577, was named Hell’s Angels after the 1930 Howard Hughes movie about World War I fighter pilots.”

Re: Professor Shutt.  See also “Job REDUX,” which noted that in his lecture on the Hebrew Bible, “Shutt gave the best analysis of the Book of Job I’ve ever heard.'”

The lower image is courtesy of File: Virgil Reading the Aeneid.jpg – Wikimedia Commons.  See also Virgil reading the Aeneid to Augustus and Octavia – National Gallery, of the same subject by a different painter, with this notation:  “The poet Virgil reads to the Emperor Augustus and his sister Octavia a passage from the ‘Aeneid’ (Book VI), in praise of Octavia’s dead son Marcellus.  She swoons with grief.  The subject is from the ‘Life of Virgil’ by Donatus.”

Re:  “Hell’s Angels.”  See also the Wikipedia article, Hells Angels.  On that note see also On spam and “angels unaware.”  That post included a citation of Hebrews 13:2:  “Don’t neglect to show hospitality, for by doing this some have welcomed angels as guests without knowing it.”  (I noted that the more-familiar “angels unaware” language came “from the King James Bible, the one God uses.”)

The notes from Professor Shutt’s Lecture 11 were gleaned from pages 86 and 87 of the Course Guide for Hebrews, Greeks and Romans:  Foundations of Western Civilization.

Re: Shutt on Virgil crystallizing his “sense of things,” from Book III of the Aeneid.  Emphasis was added to the passage “some of what happens seems to make pretty much no sense.”  Shutt went on to say that in some sense, our efforts to come to know that “overarching order” tend to make things worse rather than better, evoking “something like the modern concept of ‘entropy,’ that is, the universal tendency for disorder to increase.”  See also Wikipedia, the free encyclopedia, which said the term entropy referred to “a measure of the number of specific ways in which a thermodynamic system may be arranged, commonly understood as a measure of disorder.”

The image at right of the paragraph with “The Force that Created the Universe” is courtesy of that website, “The Star Wars Wiki.”  The caption:  “Obi-Wan Kenobi speaks to Luke Skywalker after the death of his body.”

Re:  “asking nothing but to enjoy God’s presence.”  That’s a prayer in the Anglican Catechism. See Online Book of Common Prayer, at Outline of the Faith, page 857, under “Prayer and Worship…”