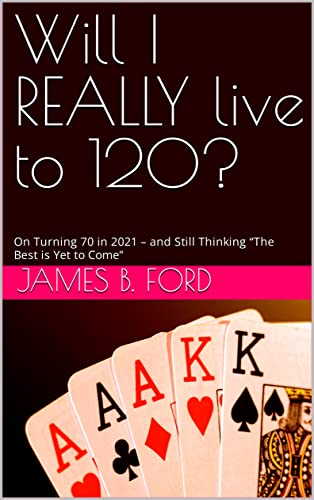 Here’s a news flash:  I just published another new E-book. You can check it out by clicking on Will I REALLY live to 120?: On Turning 70 in 2021 – and Still Thinking “The Best is Yet to Come.” (Written and published under my Nom De Plume, “James B. Ford.”)

You can see more information in the Kindle Book blurb, but there are also a number of citations to this blog, as well as my 2019 pilgrimage to Jerusalem. Speaking of which, I also published an earlier E-book, in 2019, (Some) Adventures in Old Age: Or, “How NICE it was to travel, before COVID.” As you can tell by the sub-title, it concerned travel during the recent pandemic:

What makes the book timely? Just that in this day and age it’s tough to do ANY traveling, let alone go overseas. Which brings up a point. I’ve often wondered why so many Americans in the 1920s and ‘30s were so fascinated by Ernest Hemingway’s books on France and Spain…  I’m guessing part of it was that back then most Americans could only DREAM of travel to such exotic places. (Like today with Covid.)

The cover picture – at right – shows me “blending in” in Jerusalem in May, 2019. The book talks about adventures I had on that trip, including  how I found the “BeerBazaar,” located on Etz Hayyim – I knew it as Jaffa Street – a 4-minute walk from Davidka Square. (Where I found a liquor store my first Sunday in Jerusalem, and bought some brandy for light libations after a day’s trekking about the Holy Land.)

I published another book, in 2018, “There’s No Such Thing as a Conservative Christian”: and Other Such Musings on the Faith of the Bible. But I’ll be re-writing and re-issuing that, probably under the new title, “Not all Christians are Right-wing Wackos.” Or something less combative and less “broad brush” than the original. One possible alternative title would be “Not all Christians are Close-minded,” but that lacks punch.

In truth there may be some Christians out there who are conservative but still open-minded, but they’re not “getting the ink” as we used to say back in the newspaper business. In other words they’re not getting the news coverage… But be that as it may, you can check it out by clicking on the “No Such Thing” link, or you can wait for the new, updated version.

By the way, the cover for that book shows Jacob wrestling with the angel, from Wikipedia, which is a reminder that that’s something all real Christians are called on to do (they’re not too conservative). On a similar note there’s Jesus Christ, Public Defender: and Other Meditations on the Bible, For Baby-boomers, “Nones” and Other Seekers, which I published in 2019.

Check out the Kindle blurb for more information, but here’s a brief summary. First the book explores the image of Jesus as “Ultimate Public Defender,” in the Ultimate Courtroom, before the Ultimate Judge. (And what makes this Ultimate Public Defender so special? He’s the Judge’s son.) Then there’s Luke 24:45, where Jesus “OPENED THEIR MINDS to understand the Scriptures.” (A point many way-too-conservative Christians have lost along the way.) And there’s the better way of approaching the Bible, of following the spirit of its law, rather than it’s unfeeling “letter.” (As Paul said in 2d Corinthians 3:6.)

And finally, some other, earlier E-books. In October 2015, I published The mysterious death of Ashley Wilkes, a collection of posts from a second blog, Georgia Wasp. And in March 2015 I published Volume 3 of my collection of these blog-posts.

That means the e-book Volumes 1 through 3 are available through Amazon.com: Kindle eBooks. Volume 1 included 13 blog-posts, up to “Titanic” and suspending disbelief. Volume 2 began with On Jesus: Liberal or Fundamentalist? It included 12 posts and ended with On “Patton,” Sunday School teacher and On the readings for June 1. And to see more about Volume 3, check the post, Reflections on Volume 3.

One note: While the E-book will feature full-color images – like those in the Blog – the paperback’s images will be in “grayscale,” to save money for both author and reader. And sometimes the E-book and paperback versions have different covers. Also, way back in time I published under a different nom de plume, “T.D. Scribe.” To get one of those E-books go to Amazon.com: Kindle eBooks: Kindle Store and type in “T. D. Scribe.” To order one of those earlier paperbacks, go to Shop Books – Lulu, and type in that name as well.