Jesus – seen above – made two main promises:  First, that He would never turn away anyone who came to Him.  Second, He came to Earth so His followers could have life “in all its abundance.” (See John6:37 and 10:10.)  Which raises a question:  Why would anyone want to interpret those promises literally or narrowly?  (See strict construction … Law.com.)

Under strict construction – used by Fundamentalists – “ambiguous language is given its exact and technical meaning.”   Under that rule for Matthew, if you aren’t expressly for Jesus, you are against Him.  But in Mark, being “kind of against us” doesn’t put you “outside the pale.” In Mark, if you are not expressly against Jesus, you are for Him and/or for Christianity.

Also, by strictly interpreting those quotes – giving them their exact and technical meaning – you end up with Jesus contradicting Himself.

It also raises the question: What did Jesus do when interpreting Scripture?  Was He strict or “liberal?”  One answer: Both.   See www.kencollins.com/answers/question-43.

The site’s author, Reverend Collins, said that many people try to harmonize the passages “by theorizing that when it comes to Jesus, there is no middle ground. You are either for Him or against Him.” He too was puzzled by the passages until he read an old commentary by a man named Theophylact (who died in 1108).  Theophylact says that if we observe these verses in context and compare them, we see that Jesus is talking about two entirely different situations.”

Collins said that in Mark Jesus talked of men, people, who were doing good works in Jesus’ name, “even if they don’t have the proper credentials.” So if a layman is “conducting a valid ministry where there is a need and no one else to meet it,” the Church shouldn’t stop him, but “find a way to include him. Whoever is not against Jesus is for Him.”

But in Matthew, Jesus was talking about demons. Matthew 12:30 came right after the “house divided” speech (later used by Abraham Lincoln). In 12:22, Jesus was presented with a man possessed by demons. But when Jesus cast out the demons, the Pharisees said He could only do that because He was Satan, prince of demons Himself.

After saying it didn’t make sense for Satan to cast out his own, Jesus moved to how the house of a “strong man” or Satan (translations vary) might be robbed.  He later added, “Anyone who isn’t helping me is harming me.” (Emphasis added.)

Collins said that at first he thought Jesus was talking about people in Matthew (as “plain meaning” would require).  But he changed his mind after considering “Theophylact” – shown at left – noting that he was “neither a Protestant nor a Catholic;  his native language was the same language that the apostles used to write the New Testament, and he lived in a completely different political, social, and theological context than we do.”   Thus interpreting the two passages “in context,” it seems that Jesus was indeed addressing two different cases.

So just what is the Bible’s purpose?   The Apostle Paul said in First Timothy 2:1-4 that the Bible’s purpose has always been saving as many as possible:  “I urge that supplications, prayers, intercessions, and thanksgivings be made for all men… This is good, and it is acceptable in the sight of God our Savior, who desires all men to be saved.”  See also Second Peter 3:9, “The Lord is not slow in keeping his promise, as some understand slowness. He is patient with you, not wanting anyone to perish…”  (A goal that arguably can’t be met by being strict or limiting…)

In other words, it makes sense that if a person isn’t expressly against Jesus, He – Jesus – is willing to give that person (and all people), the benefit of the doubt.   But in the case of demons Jesus used a strict interpretation of Scripture.  In both cases He construed the Bible to achieve its self-stated aims.  Which means that Jesus was neither a liberal nor a conservative when it came to interpreting Scripture.  He was right there “in the middle of the road.”

That’s also called the Via media or “Middle Way,” the subject of a future post. 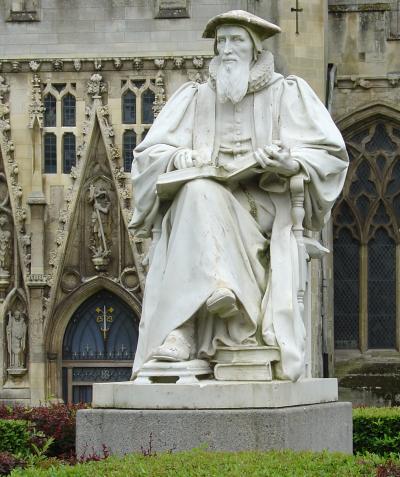 Re:  The “two” great promises of Jesus.  This post-column was last edited on May 11, 2014.  That was before I fully appreciated the Third Great Promise, as told by Jesus in John 14:12:  “Very truly, I tell you, the one who believes in me will also do the works that I do and, in fact, will do greater works than these, because I am going to the Father.”  (Emphasis added.)

The lower image is courtesy of the Richard Hooker link in the article, Via media – Wikipedia.  The caption:  “Statue of Hooker in front of Exeter Cathedral.”  One author noted, ” Hooker’s moderation and civil style of argument were remarkable in the religious atmosphere of his time.”  Also:

Traditionally, he has been regarded as the originator of the Anglican via media between Protestantism and Catholicism.  However, a growing number of scholars have argued that he should be considered as being in the mainstream Reformed theology of his time and that he only sought to oppose the extremists (Puritans), rather than moving the Church of England away from Protestantism.