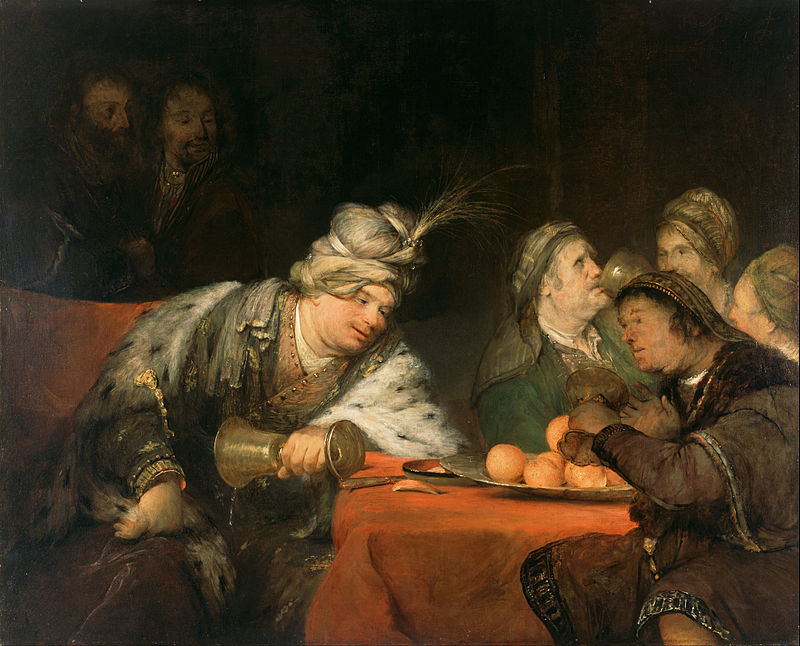 I last reviewed the readings for a Sunday coming up on August 7.  (See The OTHER readings for August.)  I said I was leaving town on August 10, and wouldn’t be back until August 27.  So here’s a summary of the Bible readings for September 27.  (A full month later.)

(And a BTW:  Today’s Gospel raises the question whether Jesus was a Liberal or a Conservative…)

Now about that Gospel:

Some people have pointed out that this contradicts what Jesus said in Matthew 12:30.  Matthew had Jesus saying, “Whoever is not with me is against me.”

Which raises a matter of legal presumptions.  In the Mark/Luke version, if you haven’t come out and said you’re against Jesus, you’re still on His side.  But in the Matthew version, unless you come out and say that you’re on the side of Jesus, you are presumptively against Him.  All of which could be extremely important when it comes to deciding if you’re “going to Hell.”

Then too, some other people have gone as far as to say that such contradictions in the Bible prove both that it’s a crock, and/or that there are “no supernatural entities – including God.”  (See for example, A List Of Biblical Contradictions, discussed further in the notes.)

But the issue here is whether today’s Gospel tends to prove that Jesus was either a Conservative or a Liberal.

(One quick point:  If Jesus had been conservative, we’d all be Jewish today.  “Not that there’s anything wrong with that!“)

But seriously, I discussed the issue raised by this Gospel reading in a post in May 2014:  Jesus: Liberal or Fundamentalist?  In that post I wrote:

Under [a] strict construction – used by [conservatives] – “ambiguous language is given its exact and technical meaning.”   Under that rule for Matthew [12:30], if you aren’t expressly for Jesus, you are against Him.  But in Mark [9:40], being “kind of against us” doesn’t put you “outside the pale.” In Mark, if you are not expressly against Jesus, you are for Him…  Also, by strictly interpreting those quotes – giving them their exact and technical meaning – you end up with Jesus contradicting Himself.

So which is it?  Did Jesus mean to say unless you’re expressly for Him, you’re against Him?  (And presumably going to Hell…)   Or that unless you expressly reject Him, you’ve still got a chance?

When resolving such issues, the primary question is:  “What did the writer intend?”  So, could Matthew and Mark have intended to create such a contradiction?  Certainly not.

To make a long story short:  The two passages reflect entirely different situations.  In Matthew 12, Jesus was dealing with demons.  (Matthew 12:22-37 comes under the heading “Jesus and Beelzebul.”)  But in Mark 9, Jesus addressed what to do with people; human beings.

Thus in the case of people – like us – Jesus liberally interpreted the Bible:

In this case the “law” at issue is the Bible.  By using a liberal interpretation, Jesus was saying that “if a person isn’t expressly against Me,” He – Jesus – is willing to give that person the benefit of the doubt.  In other words, Jesus was prone to give us poor schmucks a break.

In still further words, Jesus seemed to be showing that He was a true moderate.  He wanted to see the Bible’s “object and purpose” fully implemented.  And to do that, He used a liberal approach when necessary, and a conservative approach when He had to.

And what is that “object and purpose?”  The best answer is in 2d Peter 3:9, where Saint Peter – holding “the keys to the kingdom” – said God “wants all people to have an opportunity to turn to him…”

Moving on to the Old Testament, the Book of Esther tells the story of a Jewish woman who married a king and in turn saved her people from annihilation.  Here’s what happened:

Ahasuerus was the king of Persia.  (He was also known as Xerxes.)  One day he got drunk with his buddies.  He then sent for his wife – Queen Vashti, who was very beautiful – with orders to come to the party and strut her stuff.  But she refused – she was very proud – so Ahasuerus decided to get rid of her.  In a process very much like today’s American Idol, Esther ended up being chosen as the new queen.

Which was a good thing, because the Grand Vizier – Haman – had hatched a plot against the Jews.  (Of which Esther was one.  This was during the Babylonian exile, one of the times when the Jewish people were carried away into captivity.)  Haman was jealous of Mordecai – Esther’s cousin – for reasons including but not limited to the fact that Mordecai “refused to do obeisance” to him.  So he tricked the king into giving orders to “exterminate this alien race.”  To that end, Haman had a tall gallows built, on which to hang Mordecai.

But in the reading for September 27, Haman’s plans come unraveled.  (As shown metaphorically at left.)

For one thing, Esther finally told the king that she was Jewish.  (Which is consistent with the “Seinfeld” theme noted above.)  And in the end, “they hanged Haman on the gallows that he had prepared for Mordecai.”  (See Esther 7:10, with some translations reading that Haman was “impaled” on the pole he intended to use on Mordecai.)  But more than that, the Jewish people in the country were saved from annihilation, and all of which led to the present Jewish festival of Purim.

See also hoist on his own petard.  (A phrase originating in Shakespeare’s Hamlet.)

And finally – I’m running out of space – there’s the reading from James the brother of Jesus.  (See Epistle of James – Wikipedia.)  James wrote in part that “faith apart from works is dead,” which led to a controversy that continues “even to this day.”  (See James 2:26, and also On Mary and Martha of Bethany, which provided a possible solution.)

But in today’s reading he advised that “whoever brings back a sinner from his wandering will save his soul from death and will cover a multitude of sins.”  So if you “bring someone to Jesus,” you’ll not only save that person, but also “cover up” a bunch of your own sins.  See James 5:20, raising what I like to call the “James 5:20 commission.”  (I’ll take any break I can get…)

And besides that, the reading gave rise to the rather domestic scene below. 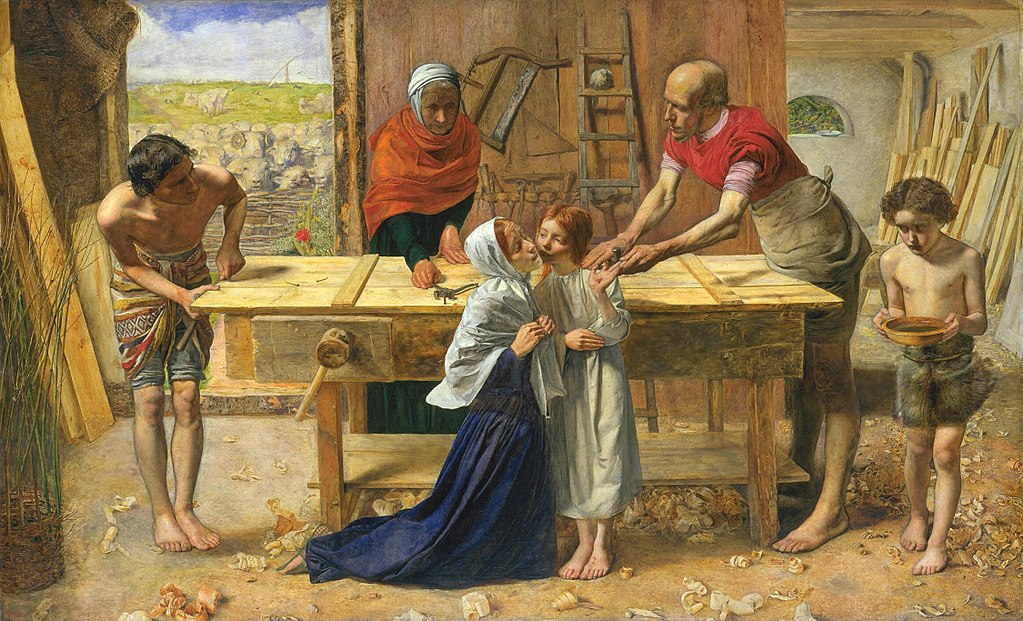 “Christ in the House of His Parents … including James, the brother of Jesus.”

The upper image is courtesy of Ahasuerus – Wikipedia.  The caption:  “Aert de Gelder, The Banquet of Ahasuerus.”  The site noted that the name “Ahasuerus is equivalent to the Greek name Xerxes, both deriving from the Old Persian language.”  See also AHASUERUS – Jewish Encyclopedia.com, noting he was the “Persian king, identical with Xerxes (486-465 B.C.).”

Re:  “Bible contradictions.”  The ostensible Matthew-Mark contradiction was pointed out in the For or against link at the Secular Web site, owned and operated by Internet Infidels, Inc.  The site added:  “The Bible is riddled with repetitions and contradictions, things that the Bible bangers would be quick to point out in anything that they want to criticize.”

The website took the Bible to task for not creating a “carefully constructed treatise, reflecting a well-thought-out plan.”  I addressed such criticisms in posts like The readings for June 15 – Part I.  I pointed out that Moses – for example – in writing the first five books of the Bible, was limited by “his audience’s ability to comprehend.”   The audience he “wrote” for was almost wholly illiterate – not to mention ignorant by present-day standards – and had been trained since birth only to be mindless, docile slaves.  Thus Moses was forced by circumstance “to use language and concepts that his ‘relatively-pea-brained contemporary audience’ could understand.”

In further words, if Moses had written the “carefully constructed treatise” suggested by the “Infidels,” he almost certainly would be burned at the stake or stoned to death.  (Or both.)  See also Reflections on Volume 3 – Part II, which includes “The Stoning of Moses and Aaron.”

On this point see also Internal consistency of the Bible – Wikipedia:

Dietrich Bonhoeffer pointed out [the] conflict, between Matthew 12:30 … and Mark 9:40 [and] called these two sayings “the claim to exclusiveness and the claim to totality…”  D.A. Carson commented similarly, adding he thought [Mark 9:40] describe[d] the attitude listeners are to have to other possible disciples: when in doubt, be inclusive…

Other New Testament scholars have said these were not separate statements, “but rather one statement that has either been preserved in two different forms, or has been altered by the Gospel writers to present a point of view that expresses the needs of the Christian community at the time.” The site noted that Mark – the first Gospel to be written – presented the “inclusive” type of Christianity, while Matthew’s version is the more exclusive.

The “No labels” image is courtesy of www.newrepublic.com/article/politics/80058/sticking-point.

Re:  “Haman’s plans come unraveled.”  The image is courtesy of the Wikipedia Mordecai link, with the caption, “The Triumph of Mordecai by Pieter Lastman, 1624.”

Re: “impaling.”  See also Vlad the Impaler:  “The name of the vampire Count Dracula in Bram Stoker‘s 1897 novel Dracula was inspired by Vlad.”

The lower image is courtesy of Epistle of James – Wikipedia.  The painting is by John Everett Millais, and was “immensely controversial when first exhibited because of its realistic depiction of a carpentry workshop, especially the dirt and detritus on the floor.”  For example, Charles Dickens said Millais portrayed Mary as so “hideous in her ugliness that … she would stand out from the rest of the company as a Monster, in the vilest cabaret in France, or the lowest gin-shop in England.”

But I thought it was a very nice, very “domestic” painting…

Michael is mentioned three times in the Book of Daniel, once as a “great prince who stands up for the children of your people.”  The idea that Michael was the advocate of the Jews became so prevalent that in spite of the rabbinical prohibition against appealing to angels as intermediaries … Michael came to occupy a certain place in the Jewish liturgy.