Type “holier” in your search engine.

“Holier than thou” will automatically pop up.

There’s probably some kind of object lesson there.  (That is, it may well be “an example from real life that teaches a lesson or explains something.”)

Then too, a “holier than thou” search will lead to the self-righteousness article in Wikipedia.  It defines self-righteousness and/or a holier than thou attitude as a “feeling or display” – usually smug – “of moral superiority derived from a sense that one’s beliefs, actions, or affiliations are of greater virtue than those of the average person.  Self-righteous individuals are often intolerant of the opinions and behaviors of others.”

Wikipedia also noted that the term is often considered derogatory. . .

particularly because self-righteous individuals are often thought to exhibit hypocrisy due to the belief that humans are imperfect and can therefore never be infallible, an idea similar to that of the Freudian defense mechanism of reaction formation.  The connection between self-righteousness and hypocrisy predates Freud‘s views, however, as evidenced by the 1899 book Good Mrs. Hypocrite: A Study in Self-Righteousness, by the pseudonymous author “Rita.”

In other words, the attitude has been around for a lot longer than 1899.   In fact it was around when Jesus walked the shores of Lake Galilee, which leads to another interesting note.  The Wikipedia article on self-righteousness includes a link to The Mote and the Beam, the parable of Jesus illustrated in the painting above.  (There’s probably some kind of object lesson there too.)

In case you missed it, here’s Wikipedia’s take on the story:

The Mote and the Beam (also called discourse on judgmentalism) is a proverbial saying of Jesus given in the Sermon on the Mount, in the Gospel of Matthew, chapter 7, verses 1 to 5. The discourse is fairly brief, and begins by telling his disciples not to judge others, arguing that they too would be judged by the same standard.

(That’s where the “prevailing quacks” come in.  See the Mencken note below.)

In the same way, just being aware that you may be self-righteous – or may have a “holier than thou” attitude – is a strong indication that you probably don’t have either problem.

Of course I could be wrong! 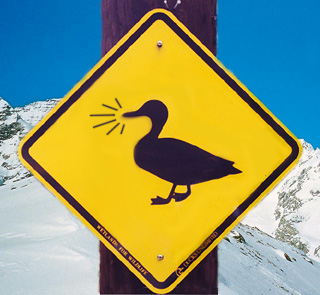 The upper image is courtesy of the “Mote and beam” Wikipedia article.   The full caption: “A [circa] 1619 painting by Domenico Fetti entitled The Parable of the Mote and the Beam.”

As to Father Watson’s take, see also What is the “unforgivable sin … Power to Change: “Thus, if you are worried that you have committed blasphemy against the Holy Spirit, you could not possibly have done it.”  (Emphasis in the original.)

As to what God really wants – rather than being self-righteous or “holier than thou” – see the end of On the June 22 readings – Part II: from Micah 6:8 (in the Living Bible); God “has told you what he wants, and this is all it is: to be fair, just, merciful, and to walk humbly with your God.”

The lower image is courtesy of “http://3.bp.blogspot.com/-XZJhPXe2I7M/TLqFa9FQUfI/AAAAAAAAABk/brh__nKDJik/s1600/ducksign.jpg.”   The image refers H. L. Mencken’s quote indicating the job of both journalists and Christians is to “challenge the prevailing quacks,” as noted in his Minority Report:

The only way that democracy can be made bearable is by developing and cherishing a class of men sufficiently honest and disinterested to challenge the prevailing quacks.   No such class has ever appeared in strength in the United States.  Thus, the business of harassing the quacks devolves upon the newspapers.  When they fail in their duty, which is usually, we are at the quacks’ mercy.

Did the Scribe mention that he has a Master’s Degree in journalism??