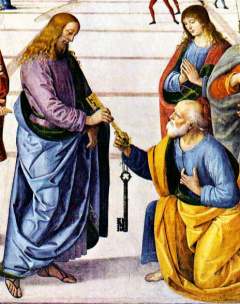 Roman Catholics like to claim theirs is the one-and-only true church, based on Matthew 16:13-19, where Jesus asked His disciples, “Who do people say that the Son of Man is?”

The guesses included John the Baptist, Elijah, Jeremiah, or one of the other prophets of old.  Then Jesus said, “But who do you say that I am?”

Simon Peter said in reply, “You are the Messiah, the Son of the living God.”  Jesus said to him in reply, “Blessed are you, Simon son of Jonah. . .   I say to you, you are Peter, and upon this rock I will build my church, and the gates of the netherworld shall not prevail against it.  I will give you the keys to the kingdom of heaven. Whatever you bind on earth shall be bound in heaven; and whatever you loose on earth shall be loosed in heaven.” (E.A.)

So far so good.  Jesus gave Peter the “keys to the kingdom,” as shown in the painting-detail above.  (Actually a fresco in the Sistine Chapel.)  And so – Jesus told Peter – “Whatever you bind on earth shall be bound in heaven; and whatever you loose on earth shall be loosed in heaven.” (See Power of the Keys – Wikipedia, and CATHOLIC ENCYCLOPEDIA: Power of the Keys – New Advent.)

But note what happened a couple chapters later, in Matthew 18.  That chapter began with the  disciples – all 12 of them – coming to Jesus and asking, “Who is the greatest in the kingdom of heaven?”  That’s when Jesus called a child and “put him in the midst of them” – all 12 of them – and said, “Truly, I say to you, unless you turn and become like children, you will never enter the kingdom of heaven.”  Jesus spoke on sin and “woe to the man by whom the temptation comes!”  He added the metaphor – not to be taken literally – about plucking your eye out if it caused you to sin, because “it is better for you to enter life with one eye than with two eyes to be thrown into the hell of fire.”  Later He added this, speaking to all 12 disciples:

Wait.  What?  Weren’t those the same words that Jesus spoke to only Peter, a chapter or two before?  And wasn’t that the same power that Jesus had given only to Peter?

One thing that happened came just a few verses later in Matthew 16, beginning at verse 21.  That’s where Jesus started to tell His disciples He had to go to Jerusalem, suffer at the hands of “the elders and chief priests and scribes,” and be killed, and on the third day be raised:

And Peter took him and began to rebuke him, saying, “God forbid, Lord! This shall never happen to you.” 23 But [Jesus] turned and said to Peter, “Get behind me, Satan!  You are a hindrance to me; for you are not on the side of God, but of men.” (E.A.)

(In the words of the King James Bible – the one God uses – the phrase was “Get thee behind me, Satan.”)  As to why Jesus said that, consider Why did Jesus say to Peter, “Get behind me Satan”?   But the fact remains that Jesus did say that, and so – not long after saying that – He took the exclusive power He’d given to Peter and made it the power of all 12 disciples.

As to the effect of that change, see for example A Natural Law Manifesto – Right Reason, which indicated in pertinent part that “the statute passed later is presumed to have superseded the law enacted earlier.”  See also 7 Modification of Contracts – Shefsky & Froelich, which indicated that an “agreement that is complete on its face supersedes all prior agreements on the same
subject matter.”  (Did the Scribe mention that he was a lawyer in his prior life?)

So, in Matthew 16:16 Jesus gave Peter the exclusive power of the “keys to the kingdom.”  Then a few verses later Jesus sternly rebuked Peter for becoming “an unwitting spokesperson for Satan.” (See the “Why did” site above.)  Later still Jesus either effectively modified His “statute” or His “contract” and – using the same language – changed the power of “binding and loosing” by giving it to all 12 disciples instead of just Peter alone.

The effect of all this is to nullify the strong implication – promoted by the whole “St. Peter and the Keys” thing – that only Roman Catholics will get into heaven.  Of course Southern Baptists say pretty much the same thing, on the theory that infant baptism has no practical effect and that in order to get into heaven you have to be baptized as an adult. (See Baptists – Wikipedia.)

But what does the Bible say?  For one thing the Apostle Paul said, in Philippians 2:12, “work out your own salvation with fear and trembling.”  Which is of course perfectly consistent with what he said much earlier, in Romans 10:9, “If you declare that Jesus is Lord, and believe that God brought him back to life, you will be saved.”  (Emphases added.) As to the keys to the kingdom, see also Delivery of the Keys (Perugino) – Wikipedia, the …, describing a fresco in the Sistine Chapel, in Rome.  The image at the top of this post is a detail of that fresco.

As to “Roman Catholics.”  Here’s the distinction.  “Small-c” catholic means universal or comprehensive; “especially :  broad in sympathies, tastes, or interests <a catholic taste in music>”.  See Catholic – Definition and More from the Free Merriam-Webster.  A more earthy example might be:  “That guy certainly has catholic tastes in women.  He’ll do anybody.”

But see also Cafeteria Catholicism – Wikipedia, which noted in part:

The term cafeteria Catholicism is applied to those who assert their Catholic identity yet dissent from Catholic doctrinal or moral teaching or who are viewed as dissenting by those using the term.  Examples include Catholics who are accused of dissenting from Church teachings on human sexuality (the so-called “pelvic issues”). . .

The site also noted that the term “is most often used by conservative Catholics critical of progressive Catholics.”  On that note see About this Blog, which said “those who read the Bible strictly, narrowly and/or ‘fundamentally'” – or you could read in conservatively – “are not only cheating themselves, they’re also driving other people away from the Faith of the Bible in droves.”

As to good news and gospel:  “The word gospel derives from the Old English gōd-spell [5] (rarely godspel), meaning ‘good news’ or ‘glad tidings.’   The word comes from the Greek euangelion, or ‘good news.’   The gospel was considered the ‘good news’ of the coming Kingdom of Messiah, and of redemption through the life and death of Jesus, the central Christian message.” Gospel – Wikipedia.  The lower image is courtesy of that article, which featured the caption, “The first page of the Gospel of Mark in Armenian, by Sargis Pitsak, 14th century.”