Just in case you were wondering, Christmas is not just one day, it’s a whole season.  Not a long season, just 12 Days.  (Which 12 days of Christmas have been immortalized by a “host of songs and spin-offs,” including one ending with “some parts to a Mustang GT.”)  And that 12-day Season of Christmas  ends on January 6, a day known in some quarters as “Plough Monday.”

Plough Monday was the traditional start of the English agricultural year.  That was the time when people quit partying during the 12 days of Christmas and got back to work.  (See “Here’s to Plough Monday!” – 12/28/2015.)  Of course in our present day we get “back to work” on January 2.  That’s after we’ve spent New Year’s Day watching college football and/or recuperating from all the partying we did on New Year’s Eve. 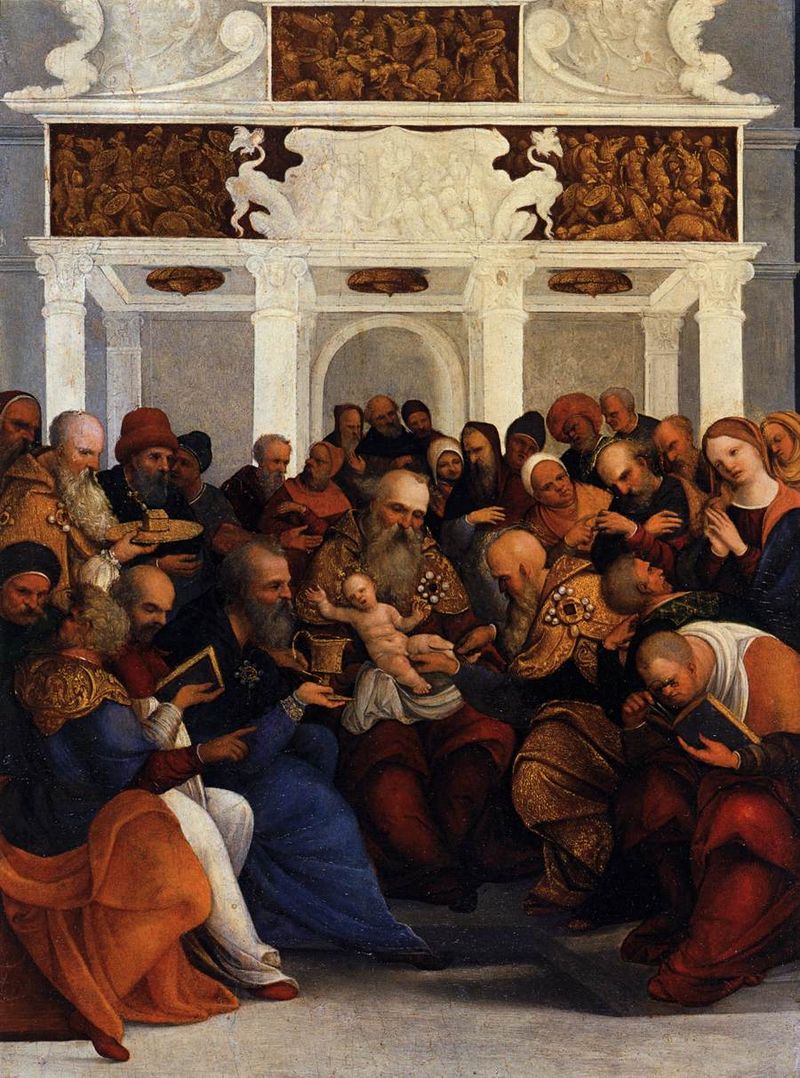 But naturally that’s not how we celebrate New Year’s Day in the Universal Church.  (That is, the undivided church of the followers of Jesus, including Catholic and Protestant denominations.)  In that undivided church, January 1 is known as the Feast of the Holy Name of Jesus.  (See also The Holy Name, for one set of Bible readings for the day.)  But there’s another name, for the less squeamish:

On January 1st, we celebrate the Circumcision of Christ.  Since we are more squeamish than our ancestors,* modern calendars often list it as the feast of the Holy Name of Jesus, but the other emphasis is the older.  Every Jewish boy was circumcised (and formally named) on the eighth day of his life,* and so, one week after Christmas, we celebrate the occasion when Our Lord first shed His blood for us.  [By and through the aforementioned circumcision, as illustrated above left.]

See Epiphany, circumcision, and “3 wise guys.”  (From 1/4/2016.)  That post from last year at this time explains about Epiphany – the “Christian feast day that celebrates the revelation of God the Son as human in Jesus Christ” – celebrated on January 6.  It also explains that January 6 too has an alternate name:  “Three Kings Day.”  And we’re familiar with those three wise men today largely thanks to a Christmas carol,  “We Three Kings of Orient Are.”  (For a live “old-timey” version see the Kings College Choir, Cambridge.)  And just as an aside, they were also known as Magi, and in its original sense the term meant “followers of Zoroastrianism or Zoroaster.”

For more on the upcoming seasons of the church, see To Epiphany – “and BEYOND!”  (From January 14, 2017.)    The title of that post refers to Buzz Lightyear and his catch-phrase, “to infinity, and beyond!”

The point being that practicing Christians also work to go “to infinity – and beyond!”  Or in the words of the Book of Common Prayer, to “live with confidence in newness and fullness of life,” and to await “the completion of God’s purpose for the world.”

But we were talking about New Year’s Day – and Eve – and the consensus seems to be that the origins of that time of celebration – if not debauchery – go back to pagan antiquity.

Back in 2,000 B.C. – 4,000 years ago – people in Mesopotamia – modern Iraq – started the practice of celebrating the new year.  But they partied hardy “around the time of the vernal equinox, in mid-March.”  The early Roman calendar too designated March 1 as the new year.

But then came the Julian calendar, named for Julius Caesar.  It added ten days to the prior 355-day year, and had the New Year start on the first day of January.  (Named for Janus, the “two-faced” god of gateways and beginnings.  Another BTW:  We now use the Gregorian calendar, which started in 1582.)  And finally, for a really in-depth analysis of New Year celebrations going back to “pagan antiquity,” see The Truth About New Year’s! Origins of New Years Celebration:

New Year’s Eve has become a time for people to wallow in excesses of liquor! The modern attitude seems to be, “have a wild time on New Year’s Eve, and turn over a new leaf on New Year’s Day!”  Most people seem to have convinced themselves that God is out of the picture for good. That God is not concerned with their modern revelings, drunken parties, promiscuous behavior!

Be that as it may, the web article on “The Truth About New Year’s” may convince you to stay home this New Year’s Eve.  (For reasons including but not limited to New Year’s Eve being “noted for its licentious, wild, and wanton partying [and] riotous pagan holiday spirits – for the most part emanating from liquor bottles – all the while calling it “Christian!”)

But heck, I was going to do that anyway.  (Stay at home this evening that is…)

The upper image is courtesy of New Year’s Day – Wikipedia.  The full caption:  “In Christendom, under which the Gregorian Calendar developed, New Year’s Day traditionally marks the Feast of the Circumcision of Christ, which is still observed as such by the Anglican Church and the Lutheran Church.”  Text and/or images for this post were gleaned from New Year’s Day – Wikipedia, The History | Origin of New Years Day / December 31st, The Ancient Origins of New Year’s Celebrations, and/or The Truth About New Year’s! Origins of New Years Celebration.  The latter article includes a sub-article on “The Modern Attitude of Compromise,” accepted by many ostensible Christians, with the comment that “Excessive drug use has become common at New Year’s Eve events.”

Note also that an asterisk in the main text indicates a statement supported by a reference further explained in this “notes” section. Thus as to the definition of squeamish – as to the full meaning of January 1 in the Christian calendar – the term means “easily shocked, offended, or disgusted by unpleasant things.”  The painting to the left of the paragraph in question is courtesy of Circumcision – Wikipedia, with the caption:  “The Circumcision of Jesus Christ, by Ludovico Mazzolino.”

Also, as to every Jewish boy being circumcised “on the eighth day of his life,” modern readers are sometimes confused by the Jewish method of counting days.  To us, the eighth day of Jesus’ life would be January 2, by starting the count on December 26.  But the ancient Jews – in effect – counted “inclusively,” meaning they started their eight-day count on December 25.  The main reason for such counting-of-days was that they had no way of determining “midnight” with any precision.  (The first “clocks” as we know them didn’t appear until the 1400s.)  Thus the Jewish day started “with the onset of night,” or dusk, or the setting of the sun.  See e.g.  Jewish Time – simpletoremember.com.

Note also:  This is why the Bible says Jesus was raised from the dead “on the third day,” Sunday, when He’d been crucified the previous Friday.  (See e,g, Acts 10:40.)  According to modern time, Jesus was raised on the second day, but that method is different from “Bible time.”

As to the web article, The Truth About New Year’s! Origins of New Years Celebration:  I’m pretty sure the authors of that site don’t agree with the premises of this blog, to wit:  That God will accept anyone;  That God wants us to live lives of abundance;  That God wants us to do even greater miracles than Jesus; and:  That the “only way to live live abundantly and do greater miracles than Jesus is to read the Bible with an open mind.”

The lower image is courtesy of The Truth About New Year’s! Origins of New Years Celebration.  The full caption:  “New York’s famed Times Square at midnight, December 31, as thousands gather to usher in the pagan Roman New Year.  The undampended [sic] spirits of the crowd bring to mind the ancient Roman Saturnalia.”  Also note, “Photo by Countdown Entertainment LLC.”