Saturday, January 6 , is the Feast of the Epiphany.

In the Christian church, that day “celebrates the revelation of God incarnate as Jesus Christ.”   But January 6 goes by other names as well.  For one thing, it’s known as the last of the Twelve Days of Christmas.  (And just to confuse things, the evening of January 5 is known as Twelfth Night.)  Yet a third name for January 6 is Three Kings Day.

There’s more about the Three Kings later, but first note Satucket on Epiphany:

“Epiphany” is a word of Greek origin, related to such English words as “theophany,” “phenotype,” and “phenomenon.”  It means an appearance, a displaying, a showing forth, a making clear or public or obvious.  On this day, Christians have traditionally celebrated the making known of Jesus Christ to the world.

(See Epiphany, circumcision, and “3 wise guys,” and To Epiphany – “and BEYOND!”)

Here’s Matthew 2:1-12:  “In the time of King Herod, after Jesus was born in Bethlehem of Judea, wise men from the East came to Jerusalem, asking, ‘Where is the child who has been born king of the Jews?  For we observed his star at its rising, and have come to pay him homage.’”

That news – of a “new-born king” – scared the heck out of Herod the Great.  (The “Roman client king of Judea.”  His “fright” led to the December 28 “feast” for the Slaughter of the Holy Innocents.) 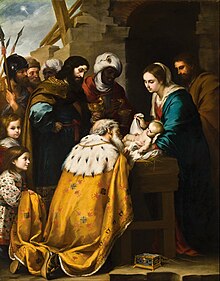 But back to the Three Kings:  As Wikipedia noted, solid facts are hard to find:  “Though the event is recounted in the Gospel of Matthew, there are no further details given with regards to their names, the number of Magi that were present or whether they were even royal.”  But for some solid theories see Epiphany, circumcision, and “3 wise guys.”  (Which includes information on the famed Christmas carol,  “We Three Kings of Orient Are.”)

Note also that the word originally used to describe the Three Kings was Magi, which gave rise to the current word “magic.”

For more on the Season of Epiphany, see To Epiphany – “and BEYOND!”  That post notes that the full season runs from January 6 to – and through – the Last Sunday after the Epiphany.  This year, 2018, that date is February 11.  The following Tuesday, February 13, we celebrate Mardi Gras.  (A.k.a. Fat Tuesday.)  The day after that – February 14 – is Ash Wednesday, illustrated above right.

Ash Wednesday marks the beginning of Lent, but we’re getting ahead of ourselves. . .

Getting back to the “eve” of January 6 as “Twelfth Night:”  That night is a “festival in some branches of Christianity marking the coming of the Epiphany.”  But as with some “holy-days,” that festival has gotten known for too much celebrating – if not debauchery – as shown in the painting below.  In fact, “Twelfth Night in the Netherlands became so secularized, rowdy and boisterous that public celebrations were banned from the church.“

In other words, it became yet another occasion for “licentious, wild, and wanton partying [and] riotous pagan holiday spirits.”  (See Happy New Year – 2018?!?)  And that tradition goes back to the time before William Shakespeare. (1564-1616.)  See also Twelfth Night – Wikipedia:

“Twelfth Night” [in the play] is a reference to the twelfth night after Christmas Day, called the Eve of the Feast of Epiphany.  It was originally a Catholic holiday but, prior to Shakespeare’s play, had become a day of revelry.  Servants often dressed up as their masters, men as women and so forth.  This history of festive ritual and Carnivalesque reversal, based on the ancient Roman festival of Saturnalia at the same time of year (characterized by drunken revelry and inversion of the social order; masters became slaves for a day, and vice versa), is the cultural origin of the play’s gender confusion-driven plot. [E.A.]

See also On coming home from a pilgrimage and the coming holidays.

Pliny [ – the lawyer, author, and magistrate of Ancient Rome – ] describes a secluded suite of rooms in his Laurentine villa, which he used as a retreat: “…especially during the Saturnalia when the rest of the house is noisy with the licence of the holiday and festive cries.  This way I don’t hamper the games of my people and they don’t hinder my work or studies.”

Or as I noted in Happy New Year – 2018, “the web article on ‘The Truth About New Year’s‘ may convince you to stay home this New Year’s Eve…  But heck, I was going to do that anyway.  (Stay at home…)”  Not that I’m comparing myself to Pliny, but see also “great minds think alike.”

So – however you celebrate it – have a Happy Season of Epiphany, starting this January 6th.

The upper image is courtesy of Epiphany (holiday) – Wikipedia.  The full caption:  “‘Adoration of the Magi‘ by El Greco, 1568, Museo Soumaya, Mexico City.”  See also Epiphany, from the “DOR” site.

The image to the left of the paragraph beginning “Back to the Three Kings” is courtesy of Wikipedia.  The caption:  “‘The Adoration of the Magi‘ by Bartolomé Esteban Murillo.

The lower image is courtesy of The Twelve days of Christmas.  See also the January 2015 post, On the 12 Days of Christmas, which noted, “The Feast of the Epiphany is on 6 January [and] celebrates the visit of the Wise Men (Magi) and their bringing of gifts to the child Jesus.  In some traditions, the feast of Epiphany and Twelfth Day overlap.”