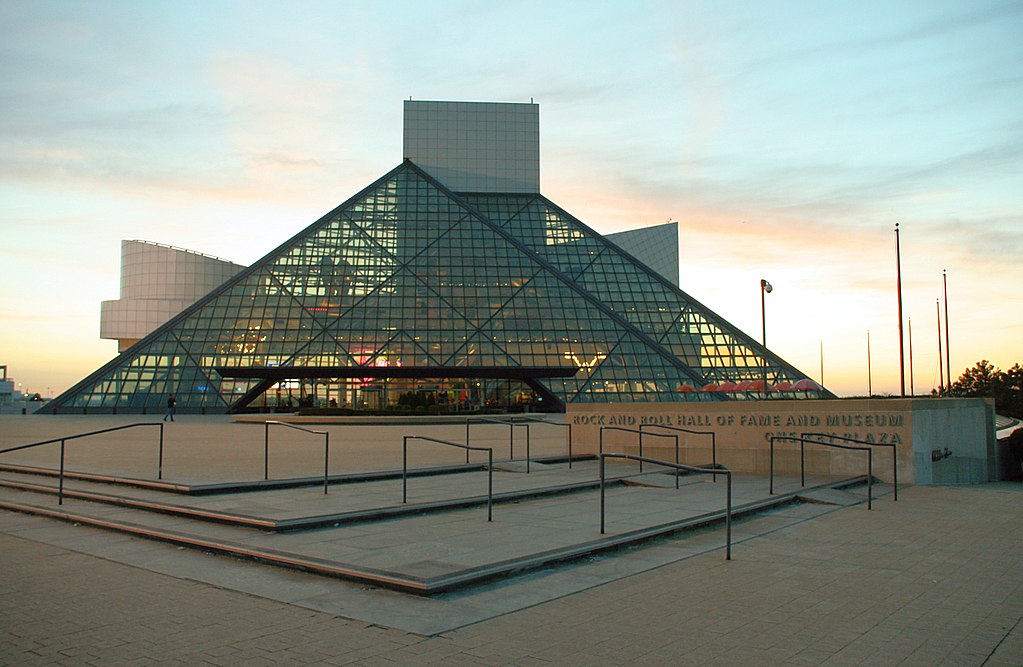 I visited that venerable institution on December 26, 2014, during a Christmas visit to Cleveland.  One of the exhibits was on Pink Floyd, a band inducted into the Hall of Fame in 1996.  See the bio at The Rock and Roll Hall of Fame and Museum | RockHall.com:

The group carried rock and roll into a dimension that was more cerebral and conceptual than what preceded it.  What George Orwell and Ray Bradbury were to literature, Pink Floyd is to popular music, forging an unsettling but provocative combination of science fiction and social commentary.

And just for a heads up, some Bible prophets were – like Pink Floyd – also adept at making “unsettling and provocative” social commentaries, as discussed further below.

Pink Floyd’s variation on that theme was undoubtedly their hit, Another Brick in the Wall, “three songs set to variations of the same basic theme, on Pink Floyd‘s 1979 rock opera, The Wall.”

Part 2 of the 3-part set was “a protest song against rigid schooling in general and boarding schools in the UK in particular.”  See Wikipedia, the free encyclopedia, which added –  as a side note – that the single version, “as well as the album The Wall, were banned in South Africa in 1980 after the song was adopted by supporters of a nationwide school boycott protesting racial inequities in education under the apartheid regime.”

Pink Floyd’s the Wall is one of the most intriguing and imaginative albums in the history of rock music…  the Wall traces the life of the fictional protagonist, Pink Floyd, from his boyhood days in post-World-War-II England…   From the outset, Pink’s life revolves around an abyss of loss and isolation…  Every incident that causes Pink pain is yet another brick in his ever-growing wall[, including:]  an out-of-touch education system bent on producing compliant cogs in the societal wheel…

“Compliant cogs in the societal wheel?”  That sounds a lot like what many Christians seem bent on producing, from their take on the Bible and the Faith that comes from it.

That might be another way of saying some people need a very “codified and structured system of belief.”  And those of us who aren’t so certain sometimes envy those who can speak of their faith with such a great sense of conviction and clarity.  But as another “prophet” said:

See Contents, above.  I responded in On “guilty until proven innocent”, which said:  “Here’s a news flash:  If your religion makes you certain, you’re missing the point!”

There’s nothing wrong with having a strong “codified and structured system of Christian belief.”  The problem comes when you think “that’s all there is to it.”  That is, some Christians seem to think that’s all there is to the Christian faith.  But to a true Christian Pilgrim, such a “codified system” is never an end in itself.   It’s just a jumping-off point, a place to start learning how to “soar on the wings of an eagle,” to paraphrase Isaiah 40:31.  (See The Blog.)  It’s also a starting point for implementing that Third Great Promise of Jesus, noted in Mr. Chan.

Which brings us back to Bible Prophets like Isaiah.  Such prophets back then were – as much as Pink Floyd in our time – “spokesmen of protest,” the “radicals of their day.”  The Bible prophets frequently stood opposed to the “formal priesthood” of their day, as well as the monarchy.

The priesthood then, as always, was primarily interested in the minutiae of ritual.  This was something that could easily be followed by anyone and generally presented no difficulties.  It might be a tedious way of gaining God’s favor, but it was not really painful…  The prophets, however, were likely to disdain ritual and to insist, instead, on a high ethical code of behavior, something that could present serious difficulties.

See Isaac Asimov’s Guide to the Bible (Two Volumes in One),  Avenel Books (1981), at page 527.  Asimov added that it was both difficult to perform that higher ethical good that Isaiah spoke of, and also difficult “to determine what [that] ethical good might be.”

On that note see On “expressio unius”, which noted the vast difference between the letter and the spirit of the law of the Bible.  Citing 2d Corinthians 3:6 and John 4:24, that post-column said such passages show “God does not want Good Christians to limit their reading, interpreting and living according to the Bible to a spirit-killing literalism…”

That’s what this blog is about.  Finding that life-giving “Spirit of the Bible.”

“Those who hope in the Lord will renew their strength.  They will soar on wings like eagles…“

The upper image is courtesy of The Rock and Roll Hall of Fame and Museum | RockHall.com, under the “Visit the Musuem” icon.  The lower image is borrowed from The Blog, and in turn is courtesy of “http://www.beliefnet.com/columnists/haveamagnificentday/files/2014/03/soaring-eagle.jpg.”

Re:  “new paths and patterns.”  See the notes to On Jonah and the bra-burners.

Also re: new paths and patterns.  See On Jesus: Liberal or Fundamentalist?  That post said Jesus made two main promises:  “First, He would never turn away anyone who came to Him.  Second, He came here so His followers could have life ‘in all its abundance.'”  (See John 6:37 and John 10:10.)  This was before I fully appreciated the Third Promise, but did lead to my question:  “Why would anyone want to interpret those promises literally or narrowly?”