I just went back over some posts from last year around this time.  I found this post, still in draft form.  So for the past couple days I’ve been updating it to this final form. Also last year at this time I did WHY we’re getting “less Christian.”

So this post will review those two from last year, plus the original On snake-handling, Fundamentalism and suicide – Part I and Part II.

Part I noted that a small group of rural Christians practice “snake handling” as part of their religion. And that they do that based on a passage from Mark 16:16-18, part of Jesus’ “Great Commission:”

On the other hand there was an article, Snake-Handling Pentecostal Pastor Dies From Snake Bite.  (Which arguably showed that “such a practice may not be such a good idea.”)

Then came the meat of the post, that the Bible is both “simple” and “deep:”

Part II went on to discuss what many say is the proper way to read, study and interpret the Bible.  It also discussed both the topics of “Biblical inerrancy” and Fundamentalism.

I said the business of “requiring every word of the Bible to be inerrant” reminded me of what Jesus said in Matthew 23:4.  He was talking about the Pharisees of His time, and noted that they tended to “make strict rules that are hard for people to obey.  They try to force others to obey all their rules.  But they themselves will not try to follow any of those rules.”

Which brings us to WHY we’re getting “less Christian.”  That post noted a study: Americans Less Religious Than Ever Before.  The gist of the article was that a then-recent poll found Christianity is on the decline, especially among the young.  And here are some of the reasons: And finally, note The wisdom of Virgil – and an “Angel.”  That post led off with the fable of the Blind men and the elephant.

The moral of that story?  That each man ended up with a good idea of part of the elephant.  But each went on to “err greatly” – as Jesus might say – by mistakenly assuming that his view was the only accurate picture of the whole elephant.

(Or as Wikipedia said, “the parable implies that one’s subjective experience can be true, but that such experience is inherently limited by its failure to account for other truths or a totality of truth.”)

That in turn brought up Virgil, and his views.  That is, throughout history most people have seen religion “in terms of black or white:  ‘our attitude toward the possibility of divine control of things tends to be all or nothing.'”  But Virgil’s view seemed more practical.

There is, in other words, an overarching order at work in the world, a final coherence in the way that things work.  But it remains out of human reach, and despite our efforts, we can merely come to know it only in part…

Which could be just another way of saying that when you become a Christian, God doesn’t become your personal servant, willing and able to cater to your every whim.  Or as one Christian mystic once said, “It is to vigor rather than comfort that you are called.”

Which means there are a some important lessons for our spiritual quest.  One is that we shouldn’t expect God to cater to our every whim, like some glorified butler.  (Maybe we should learn to say, “It’s hard as hell, but now and then I’ll do it just right…”)  And maybe we should start worshiping – not to get anything – but rather “asking nothing but to enjoy God’s presence.” 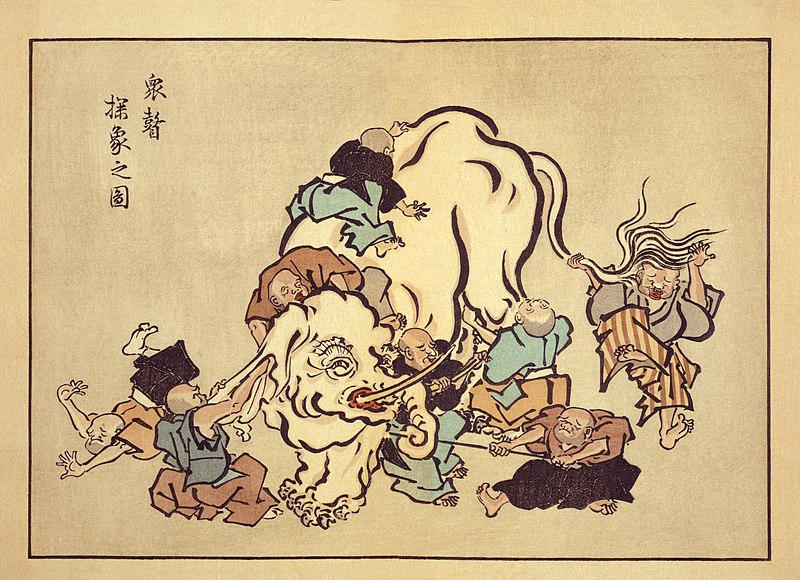 The parable of the “Blind men and the elephant…”

The upper image was featured in On snake-handling, Fundamentalism and suicide – Part I.

For some background on the “redux” part of the title, see On “Job the not patient” – REDUX.  It’s an allusion to the 1971 book by John Updike, Rabbit Redux.  That book-title in turn “led to a redux in popularity of the word redux.”  So much so that in a later book, Rabbit At Rest, Updike had his hero – Harry Angstrom – say he “hates that word, you see it everywhere, and he doesn’t know how to pronounce it.   Like arbitrageur and perestroika…”

Re: “vigor rather than comfort.”  The quote is an allusion to the book Practical Mysticism, by Evelyn Underhill, as discussed in On the Nativity of John the Baptist: