Next May 22 is Trinity Sunday.  That’s a rare feast day in the liturgical year that celebrates “a doctrine instead of an event.”  See also What is the Trinity:

The word “trinity” is a term used to denote the Christian doctrine that God exists as a unity of three distinct persons:  Father, Son, and Holy Spirit.  Each of the persons is distinct from the other yet identical in essence.  In other words, each is fully divine in nature, but each is not the totality of the other persons of the Trinity.

That reading included 1st John 3:22.  This passage is right after the one saying we can have confidence – or “boldness” – when dealing with God. (Assuming “our hearts don’t condemn us.”)  Then comes 1st John 3:22, which added this:  “And we will receive from [God] whatever we ask because we obey him and do the things that please him.”

And that’s a passage that can be misleading.  That is, some people seem to think that once they become a Christian, God becomes a sort of “magic genie,” who will cater to their every whim.  (As illustrated – sarcastically – in “O Lord won’t you buy me a Mercedes Benz,” by Janis Joplin, above left.)

But – as a reasonable person might expect – the spiritual life isn’t that simple.

For starters, Matthew Henry’s Commentary noted Christians can indeed “ask what they would” of God.  But there’s this proviso:  “They would receive it, if good for them.”  And as all kids can say of their parents, what they want is usually way different than “what’s good for them.”

Then there’s the fact that quite often God has a different timetable than us.  See Readings for October 26, which noted that Moses finally did reach the Promised Land. However, it took over a thousand years after he died.  (In the Transfiguration of Jesus):

You can see another disclaimer – on the tendency to over-simplify 1st John 3:22 – at “Job the not patient” – REDUX.  That post discussed the ever-perplexing theme of “God’s justice in the face of human suffering – or simply, ‘Why do the righteous suffer?’”

Which is another way of saying that many times we don’t get what we ask for, from God.  (As opposed to getting what we need, or “what’s good for us.”)

Or see Wisdom of Virgil – and an “Angel,” which noted that getting good things from God should be as hard as shooting the head off a matchstick from 100 yards away.  (But usually isn’t.)

(And “Virgil” also noted one professor’s view:  That we mere human beings are no more prepared to fully comprehend God than “cats are prepared to study calculus.”)

But getting back to Trinity Sunday.  The point of all this is that – if you don’t fully understand the whole concept of The Trinity – don’t feel too bad.  Or alone, for that matter…

The thing is, as smart a guy as Thomas Jefferson couldn’t figure it out either.  (In fact, Jefferson wrote his own version of the Bible – shown at left – “by cutting and pasting with a razor and glue numerous sections from the New Testament as extractions of the doctrine of Jesus.”)

Or as it was put in The Solemnity of Trinity Sunday in the Catholic Church: “We can never fully understand the mystery of the Trinity.”  It is however “the most fundamental of Christian beliefs,” that God is “three Persons in one Nature.  The three Persons of God – Father, Son, and Holy Spirit – are all equally God, and They cannot be divided.”

Which is indeed food for thought.

You can see all the Sunday Bible readings at 1st Sunday after Pentecost (Trinity Sunday).  And Romans 5:3-4 continues the theme of what we want vs. what’s good for us:

[S]uffering produces endurance, and endurance produces character, and character produces hope, and hope does not disappoint us, because God’s love has been poured into our hearts through the Holy Spirit that has been given to us. 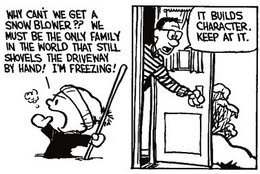 (For a more “worldly” view on building character, see Calvin and Hobbes, with the image at right.)

But getting back to the readings at Trinity Sunday, they also include John 16:12-13.  There Jesus said, “There is so much more I want to tell you, but you can’t bear it now.  However, when the Spirit of truth comes, He will guide you into all truth.”

Two points.  The first has to do with the part where Jesus said, “you can’t bear it now.”

Paul brought up that very issue in 1st Corinthians 3:2.  There he told the Christians in Corinth, “I had to feed you with milk” – metaphorically speaking – “not with solid food, because you weren’t ready for anything stronger.  And you still aren’t ready…”  Which is another way of saying that the people both Jesus and Paul were talking to were still boot-camp Christians.

(As noted below, these days they’re the Biblical literalists who never go “beyond the fundamentals.”)

And that’s just another way of saying – as Paul did – that the Bible is fully of “mysteries.”  For a list of some “mysteries” Paul listed, see the notes below, or St. Mark’s “Cinderella story.”

But because of all those “mysteries” in the Bible, it takes awhile to understand.  (A lifetime “and more,” in fact.)  And that’s just another way of saying, sometimes we just “can’t handle the truth!”

We need help.  And that brings up the second point, which has to do with the Spirit of truth, also called the Holy Spirit.  That’s the “third divine person of The Trinity,” and probably the least understood of the Three.

Put simply, assume God is the Ultimate Judge and Jesus is the Ultimate Public Defender.  In turn, the Holy Spirit is the “Ultimate Counselor.”  See John 14:26, interpreted in the Complete Jewish Bible.  There Jesus said, “the Counselor, the Ruach HaKodesh, whom the Father will send in my name, will teach you everything;  that is, he will remind you of everything I have said to you.”

But we’re getting close to the end here.  So in closing, for more information, see last year’s On Trinity Sunday, 2015.  That post included an image similar to the one below.   And it included some notes about parts of the Bible that are hard to understand:

That is, both the doctrine of the Trinity and the idea that Isaiah could have his lips “touched” with a hot coal without screaming like a banshee are difficult to comprehend.

The “banshee” part referred to Isaiah 6:6-7.  That was part of the Old Testament reading for Trinity Sunday 2015.  The full reading was about Isaiah being commissioned by God, during which “one of the seraphim flew to me with a live coal in his hand, which he had taken with tongs from the altar.  With it he touched my mouth…”

One point from last year’s post:  That Thomas Jefferson – like many of us – fell into a common error:  Thinking “he could ever really understand everything there is to know about God.”  But like many parts of the Bible, the Trinity – like Isaiah 6:6-7 – are simply beyond our ability to comprehend, fully.  “It’s a reality that we may only begin to grasp.”  Which seems to be why   so many Christians choose literalism.  “It’s ever so much easier.”

However – if you don’t want to remain “a Bible buck private all your life” – enjoy your spiritual journey, with all its challenges.  Beginning with next Sunday’s celebration of the Trinity. 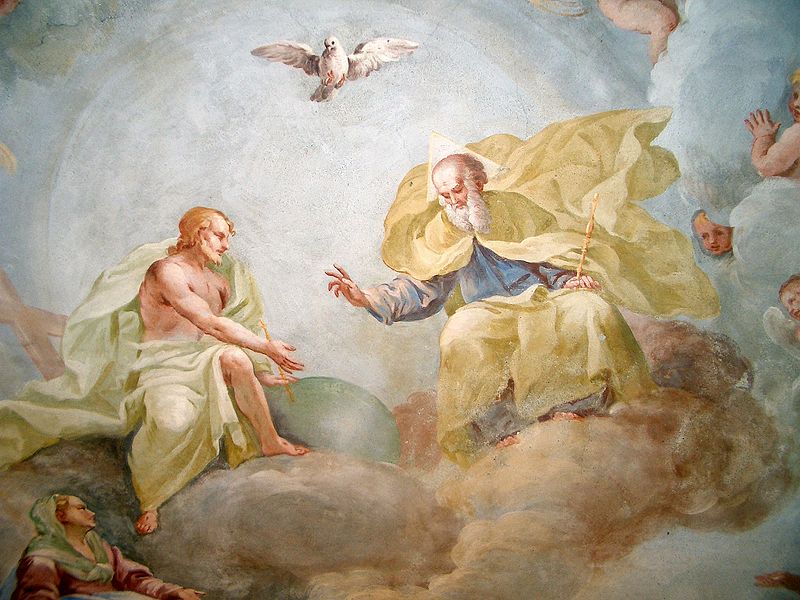 The upper image is courtesy of Thomas Jefferson – Wikipedia.  The caption:  “Thomas Jefferson, Official White House Portrait, by Rembrandt Peale, 1805.”  That article also included the “Jefferson Bible” image in the text, to the left of the paragraph beginning, “And if you don’t understand all that, don’t feel bad.”

See also Trinity Sunday in the U.S., and On the readings for July 26.

Re: the Jefferson Bible. It is formally known as The Life and Morals of Jesus of Nazareth.

Re: Romans 5:3-4. Note that the link is to the NIV translation. The block-quote is from “Satucket.”

Re: God as Ultimate Judge, Jesus as Ultimate Public Defender, and the Holy Spirit as the Ultimate Counselor.  See also The GIST (Part II).