The next major feast day coming up is The Transfiguration of Jesus, on August 6.  I wrote about the day in last year’s Transfiguration – The Greatest Miracle in the World.

One key quote noted that this Transfiguration “stands as an allegory of the transformative nature” of the Bible-faith.  (Indicating a “marked change, as in appearance or character, usually for the better.”)  Other key quotes from the post include that God has His own time-table, noted above.  And that as a result, Bible-explorers generally learn quickly that patience is definitely a virtue.

That is, not until a thousand years or so after he died.  That’s when he appeared with Jesus, along with Elijah, when Jesus was being “transfigured” on Mount Tabor:

And by the way, that part about “the greatest miracle in the world” came from Thomas Aquinas: “Thomas Aquinas considered the Transfiguration ‘the greatest miracle’ in that it complemented baptism and showed the perfection of life in Heaven.”  Others note that all the other miracles of Jesus involved Him doing things for other people.

But unlike the other miracles of Jesus, this one happened to Him. 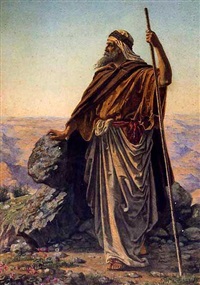 You can get the full story at the Greatest Miracle in the World post.  Or see On Exodus (Part II) and Transfiguration.

But another key thing to remember is that the Transfiguration shows that God always keeps His promises, even though His time-table may be different than ours.

That is, the Transfiguration “fulfilled a centuries-old dream for Moses, who God kept from the Promised Land. (See Why was God so upset with Moses and Why Moses [couldn’t] enter the Promised Land, as illustrated at right.)

In the meantime, I’m on a pilgrimage of my own.

I wrote a while back that this “may be the last post I’ll publish for awhile… Next Tuesday – July 26 – I’ll be heading north to Skagway, Alaska.  From there I’ll spend four days hiking the Chilkoot Trail.  (The ‘meanest 33 miles in history.’)  Once that’s done, my brother and I will spend 16 days canoeing down the Yukon River, from Whitehorse to Dawson City.

“Assuming I survive all that, I should be back in business some time after August 29.”

“But stay tuned.  There may well be ‘further bulletins as events warrant!'”

Here then, is one of those “further bulletins.”

I’m finishing this post up in Fort Nelson, British Columbia, on Thursday, July 28.  Going back to Tuesday, July 26, we made it to Great Falls, Montana.  This was after driving 560 miles:  “That means it’s about 120 miles to the Canadian border – unless they’ve built a wall or something.”

The  next day we made it to Drayton Valley, Alberta.  (West and a bit south of Edmonton.)

It took about 30 minutes to get through customs, and from there into Alberta, but once through customs and on the road “we saw a ton of these yellow plants, fields and fields of them.  It turns out they are Canola plants” – as shown below – “and they’re quite the cash crop:”

From Drayton Valley, today we made it to Fort Nelson, British Columbia.  In America-talk, it runs from Mile-marker 301 to 308. (On the famed Alaska Highway.)  But they use kilometers here.

And the gas prices are unbelievable!  We saw signs in Alberta that said “96.9.”  Unfortunately, that was the price for a liter, or one-fourth of a gallon.  So to get the “American” price you have to multiply that by 4 and get gas at $3.87.

Also today, we passed through Dawson Creek, B.C., about 3:00 this afternoon.  It’s the southern end of the Alaska Highway, as shown at right.  And on the way we “gained an hour.”  Once we crossed into British Columbia, 3:00 p.m. magically became 2:00 p.m.

Tomorrow we’ll continue, heading up to Whitehorse and Skagway.  Monday the three of us will start that four-day hike on the Chilkoot Trail.  In the meantime, there will be “further bulletins as events warrant.”

But on August 6, I’ll be sure to pause to remember the Transfiguration.  (As shown below.)

The original post had an upper image courtesy of Moses on Mount Nebo – Robert Hawke Dowling – Athenaeum. Unfortunately, in developing the post on “Transfiguration – 2020,” I saw that that image had somehow disappeared. But for purposes of completeness I’ll include the following on the artist:

Dowling – whose middle name is spelled alternately as “Hawke” or “Hawker” – was born in England in 1827, the youngest son of Rev. Henry Dowling.  He and his parents moved Tasmania in 1839, but after taking art lessons – and showing an artistic aptitude – he moved to London in 1856.  In the next 20 years or so he exhibited 16 of his paintings at the Royal Academy.  Around 1882 he moved back to Tasmania, then to Melbourne , Australia, where he painted portraits.  He returned to London in 1886, “but died shortly after his arrival.”  Other online biographies noted that as a youth “he was deeply impressed by the tragedy of the Tasmanian Aboriginals.”

The colorful image just below “In the meantime” is courtesy of Feast of the Transfiguration of Our Lord, a website of the Greek Orthodox Archdiocese of America.  The article added that in the painting, Moses and Elijah symbolically represented “the Law and the Prophets.”  Further, Moses and Elijah also “represent the living and the dead.”  (Elijah represented “the living, because he was taken up into heaven by a chariot of fire.”  Moses represents “the dead, because he did experience death.”

The smaller image of Moses on Mount Nebo is courtesy of Robert Dowling Auction Results – Robert Dowling on artnet.  The alternate title is Moses viewing the Promised Land from Mount Nebo, 1879.

I borrowed the lower image from a prior post, On the Bible and mysticism.  Courtesy of Christian mysticism – Wikipedia, it has the caption:  “Transfiguration of Jesus depicting him with Elijah, Moses and 3 apostles by Carracci, 1594.”  The site said church practices like “the Eucharist, baptism and the Lord’s Prayer all become activities” noted for both their “ritual and symbolic values.”  Further, “Jesus’ conception, in which the Holy Spirit overshadows Mary, and his Transfiguration, in which he is briefly revealed in his heavenly glory, also become important images for meditation.”