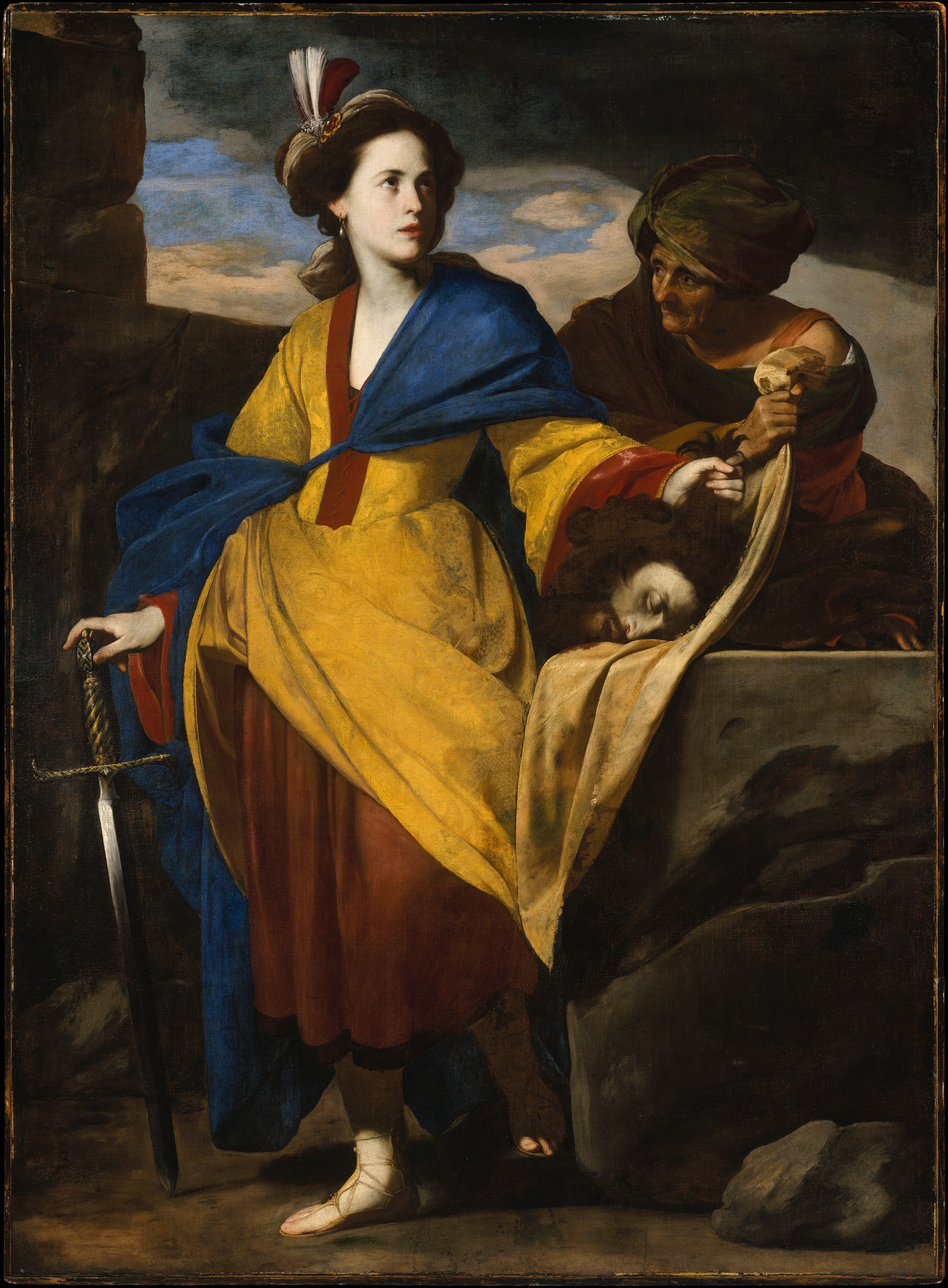 “Judith with the Head of Holofernes,”  from one of the gorier stories in the Bible…

I started a mini-vacation back on Wednesday, September 14.  (To Staten Island, as a base for visits to New York City.)  During that time I’ve also been keeping up with the Daily Office Readings.

On that note, starting Friday, September 16, “Daily” Readers have had a choice of Old Testament readings.*  (The OT readings for September 16 were either Esther 1:1-4,10-19 or Judith 4:1-15.)  In other words, the September 16 readings marked the beginning of both the Biblical Book of Esther and the Book of Judith.

So naturally it surprised me when – visiting NYC’s Metropolitan Museum of Art last Saturday, September 17 – I came across two paintings that tied right in with those readings.

That is, on Saturday, September 17 – after taking the Staten Island Ferry (shown above left) – we visited the “Met,” in New York City.  That’s when I saw the two paintings at the top and bottom of this page:  Esther before Ahasuerus, and Judith with the head of Holofernes.

Starting with the Book of Esther, it tells of a Jewish woman who married a king and in turn saved her people from annihilation.  (Or a fate worse than death, either one of which may sound familiar…)

Here’s what happened.  Ahasuerus was the king of Persia.  (He was also known as Xerxes.)  One day he got drunk with his buddies.  He then sent for his wife – Queen Vashti, who was very beautiful – with orders to come to the party and strut her stuff.  But she refused – she was very proud – so Ahasuerus decided to get rid of her.

Then – in a process very much like today’s American Idol – Esther ended up being chosen as the new queen.  Which was a good thing, mainly because the Grand Vizier for Xerxes – a guy named Haman – hatched a plot against the Jews.  (Of which Esther was one.  This was during the Babylonian exile, one of the times when the Jewish people were carried away into captivity.)

Haman “hatched the plot” as noted because he was insanely jealous of Esther’s cousin Mordecai.  (For reasons including but not limited to the fact that Mordecai “refused to do obeisance” to him; that is, Haman.)  And incidentally, Mordecai had raised Esther “as his own” after she had lost both her mother and father.  (She was an orphan.) So Haman “pulled a fast one.”  He tricked the king into giving orders to “exterminate this alien race.”  (To execute both Mordecai and all his people.)  To that end, Haman had a tall gallows built, to hang Mordecai on.  But in the readings after September 16, Haman’s plans backfired.  (As shown at right.)

For one thing, Esther finally told the king she was Jewish.

That – and some other factors – led to the king hanging Haman, “on the gallows that he had prepared for Mordecai.”  (See Esther 7:10, with some translations reading that Haman was “impaled” on the pole he intended to use on Mordecai.)

More than that, the Jewish people were saved from annihilation, which led to the present-day Jewish festival of Purim.*  (See also “hoist on his own petard,” from Shakespeare’s “Hamlet.”)

And incidentally, the readings for Tuesday, September 20, included Esther 5:1-14.  That included Esther 5:3, “The king asked, ‘What is it, Queen Esther?  What is your request?  Even up to half the kingdom, it will be given you.'”

Those words are repeated in Mark 6:23, when Salome – shown at right – danced in a way that led to the beheading of John the Baptist:  “And he swore to her, ‘Whatever you ask of me, I will give you, up to half my kingdom!'”

The point being:  In the case of Esther, the appearance before the king – together with his promise of “up to half my kingdom” – led to the Jewish people being saved.  (But in the case of Salome those factors led to the beheading of John the Baptist.)

Turning to the book of Judith:  Some scholars have called it “perhaps the first historical novel” in history.*

The story revolves around Judith, a daring and beautiful widow, who is upset with her Jewish countrymen for not trusting God to deliver them from their foreign conquerors.  She goes with her loyal maid to the camp of the enemy general, Holofernes, with whom she slowly ingratiates herself, promising him information on the Israelites.  Gaining his trust, she is allowed access to his tent one night as he lies in a drunken stupor.  She decapitates him, then takes his head back to her fearful countrymen.  The Assyrians, having lost their leader, disperse, and Israel is saved.

From which a host of object lessons might be gleaned…

Incidentally, the image at left – of Judith – is just one interpretation of this beguiling story.  (It’s the version done in 1901 by Gustav Klimt.)   Wikipedia said this particular version was “shocking to viewers and is said to have targeted themes of female sexuality that had previously been more or less taboo.”

(See also double-edged sword, both in the secular and Biblical senses.  As to the latter see Hebrews 4:12-13.)

All of which brings up the third lady in the Bible who you “wouldn’t want to ‘tick off.'”

For the Biblical reference see Judges 4:21:  “But when Sisera fell asleep from exhaustion, Jael quietly crept up to him with a hammer and tent peg in her hand.  Then she drove the tent peg through his temple and into the ground, and so he died.”  See also Jael – Wikipedia:

Deborah, a prophetess and judge, advises Barak to mobilize the forces Naphtali and Zebulon on Mount Tabor to do battle against King Jabin of Canaan.  Barak demurred, saying he would go, provided she would also.  Deborah agreed but prophesied that the honor of defeating Jabin’s army would then go to a woman.

Deborah‘s prophecy came true at the hands of Jael.  (When she hammered that tent-peg into the head of Sisera.)  And Wikipedia noted another – “extra-Biblical” – reference to the episode: “And while he was dying, Sisera said to Jael, ‘Behold pain has taken hold of me, Jael, and I die like a woman.’  And Jael said to him, ‘Go, boast before your father in hell and tell him that you have fallen into the hands of a woman.'”  (Getting beat by a woman was especially humiliating…)

All of which sounds very modern somehow.  (Considering some current jibes.)

Incidentally, the “Barak” noted above was a “commander in the biblical Book of Judges.”  It was he who – with Deborah the prophetess – “defeated the Canaanite armies led by Sisera.”

Esther before Ahasuerus, by Artemisia Gentileschi…

The head of Holofernes lies with an expression almost of sleep.  A divine light catches Judith’s face, confirming the righteousness of her deed…  I suppose what I like about this picture, and what’s so eye-catching, are the colors and the big, beautiful  rhythms of the composition.  It jumps off the wall at you and captivates you.  Judith’s dress is composed of big triangles of red, blue and yellow ochre, and the directions and movement of this drapery sweeps your eye around the painting…

The “Haman’s plans” image is courtesy of Haman (Bible) – New World Encyclopedia.  The caption: “‘The Punishment of Haman,’ by Michelangelo.”  See also On the Bible readings for September 27.

Re: Purim, the “Jewish holiday that commemorates the saving of the Jewish people from Haman, who was planning to kill all the Jews. This took place in the ancient Persian Empire. The story is recorded in the Biblical Book of Esther (מגילת אסתר … in Hebrew).”

Re:  Judith as “historical novel.”  Wikipedia indicated the book has a number of “historical anachronisms.”  Thus it is accepted as “canonical” by the Catholic and Eastern Orthodox church, but is “excluded from Jewish texts and assigned by Protestants to the Apocrypha.”

Re: The Bible and women as leaders.  See also Backlash: The Undeclared War Against American Women, which may turn out to be not such a good idea, considering the three stories noted above.

The lower image is courtesy of Artemisia Gentileschi | Esther before Ahasuerus | The Met.