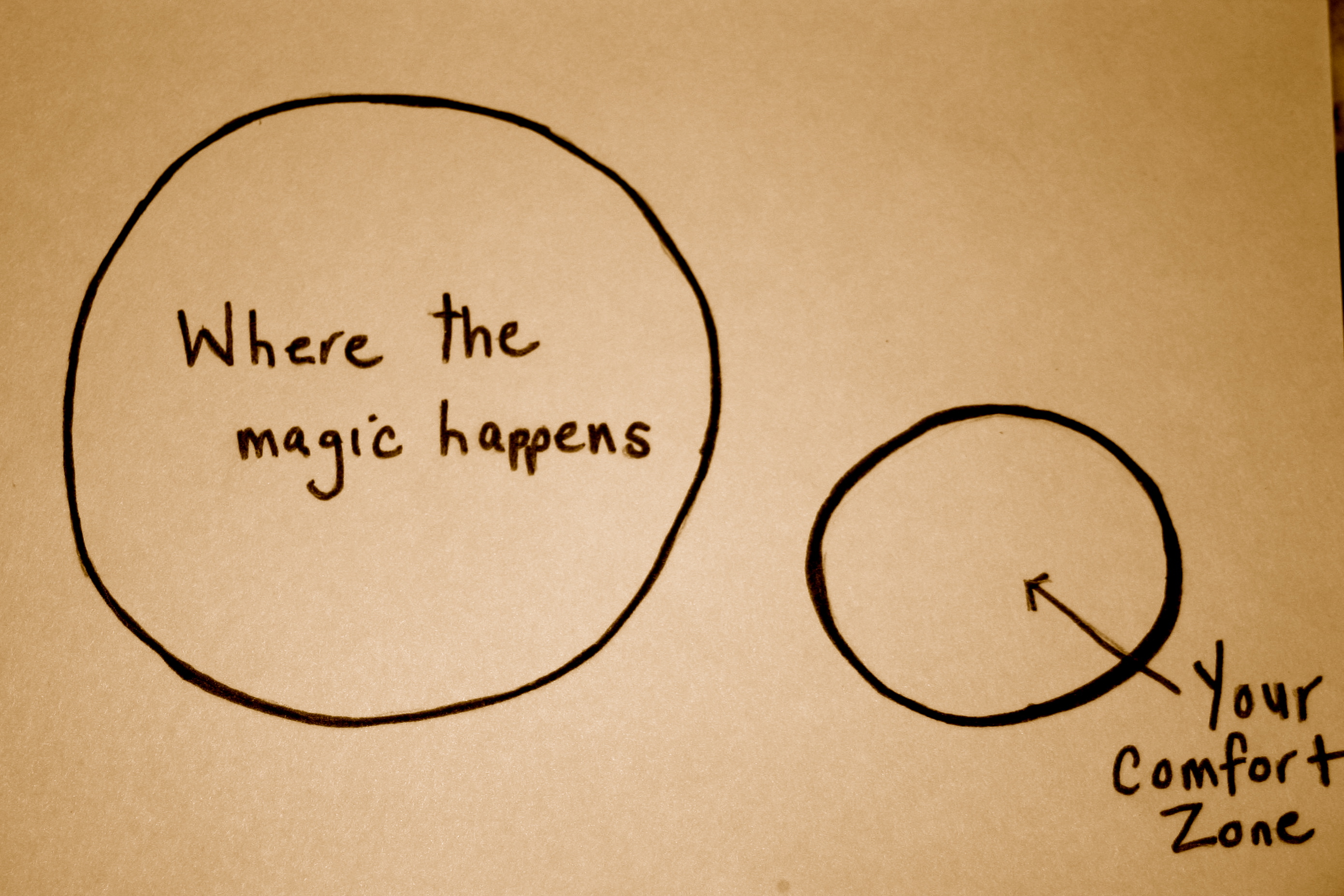 This post could be titled, “Where the magic happens.”  That is, while listening to last Sunday’s sermon a phrase hit me.  “Comfort zone.”  As in the comfort zone so many Conservative Christians seem to like.  As in “Comfort Zone Christians.”  Which led to the image above.

And led to this thought:  Those too-literal Fundamentalists are “missing out on the magic…”

I’ve used a lot of terms to describe that type of Christian; the kind this blog tries to challenge.  To get them to “explore their full potential.”  I’ve tried terms like Boot-camp Christian.  (As illustrated at left.  That is, the kind of Christian who never seems to want to leave the “boot camp” where he “learned the fundamentals.”)

I’ve also tried the term Carbon Copy Christians.  (As have others, who describe the Christians who seem to  go to church only to become “mass produced carbon copies of each other.*”)   But Comfort Zone Christian seems to hit the spot.

Like I said in the opening paragraph, God wants us to live lives of abundance.  And He wants us to do even greater miracles than Jesus.  Or as I said in Reading the Bible, “you’re only cheating yourself if you choose to read and study the Bible only in a strict, narrow, or fundamental way.”  Or – finally – as the image at the top of the page indicates, if you’re a too-literal Bible-reader, then you miss out on “where the magic happens.”

For more on this topic, see 7 Reasons Why [the] Comfort Zone is Dangerous.

The article – subtitled Live Life to the fullest – described the term as that “situation where you feel completely secure, comfortable and relaxed to what you currently have.”  Which is one thing many people look for when reading the Bible.  And which is generally a desirable place to be.  However, if you stay in your Comfort Zone too long, you don’t grow.  You stagnate.

Also, being too comfortable – in life or in Bible study – “causes negative mindset and attitude.”  And that – unfortunately – is what many Christians are known for.  (As noted in Latest from a “None,” I Googled the term “negative Christians” and got 12 million hits.)

Last of all the article said staying in your Comfort Zone too long limits your chance to “Live Life to its Fullest.”  And that would be a violation of John 10:10.  Then too, if you want to even try to follow the mandate of John 14:12, you need to remember this:  “We cannot become what we want to be by remaining what we are.“  That is, you can’t come close to doing greater miracles than Jesus if you read and study the Bible only in a strict, narrow, or fundamental way.

Which doesn’t mean you never read the Bible that way.  Sometimes it pays to go back and get a refresher course in the “fundamentals” of the Bible.  The danger comes when you only read the Bible strictly and narrowly.  Which brings up the concept of “mysticism.”

See What is Christian mysticism? – GotQuestions.org.  (As the term was discussed in On the Bible and mysticism.  Which post also noted:  “The terms ‘mystic‘ or ‘mysticism‘ seem to throw Southern Baptists and other conservative Christians into apoplexy.  (‘Try it sometime!!!‘)”

But as first used, the term “referred to the Biblical liturgical, spiritual, and contemplative dimensions of early and medieval Christianity.”  See Mysticism – Wikipedia, and On originalism.

The irony is that Bible literalists and/or fundamentalists insist on not giving the Song of Songs its literal meaning.  Instead, such Comfort Zone Christians read this book – and this book alone – “allegorically, as having to do with God’s love for his people.”  In the alternative, they interpret the book as “treating the love that it celebrates as an analogy for the love between God and the Church.”

That’s from Snake-handling “redux,” which made the point that the Bible is best approached on two levels:  A literal level where you “learn the fundamentals,” and a more spiritual level “where the magic happens.”  Or as Paul said in 2d Corinthians 3:6, Jesus “made us competent as ministers of a new covenant – not of the letter but of the Spirit;  for the letter kills, but the Spirit gives life.”  (Which is another way of saying, “If Jesus was a Conservative, we’d all be Jewish.”)

Snake-handling “redux” raised another danger of reading the Bible too literally:  The danger that some people tend to take isolated passages out of context, and way too literally.

The upper image is courtesy of comfort_zoneblog.crew.co.  The subtitle is “Why it’s scary and why you should;”  I.e., why you should get out of your comfort zone from time to time.

“Note” also that an asterisk in the main text indicates a statement supported by a reference detailed further in this “notes” section.  Thus as to Carbon copy Christians, see Paul describes an out-of-body experience, which included the link, How to Break the Cookie-Cutter, Carbon Copy Christian Cycle: