And speaking of getting back on track,* we just had two major feast days.   Last July 22 – a Saturday – was the feast day for Mary Magdalene.  And last Tuesday, July 25, was the Feast Day for James, son of Zebedee.  He was also known as “St. James the Greater.”

Mary of Magdala was “the Apostle to the Apostles.”  (As noted in last year’s post.)  Which she did “despite a sordid past and a really lousy reputation.”  (She’s seen at right, in a modern interpretation.)  But there’s some thought that – in being tagged as a prostitute – she got mixed up with the “sinner who anoints Jesus’ feet in Luke 7:36-50.”  (“Mary” was a common name back then.)

Then there’s another thought:  That her lousy reputation was due to “jealous males trying to  sully her reputation.”  Put simply, she showed a heck of lot more courage than all the male Apostles did after Jesus’ crucifixion.

That is, while they cowered behind closed doors, she braved the danger and went out to become “the first person to see the empty tomb of Jesus, and one of the first – if not the first – to see the risen Jesus.”  That’s one reason that St. Augustine referred to her as the “Apostle to the Apostles.”  But it could also explain other efforts to trash her reputation: 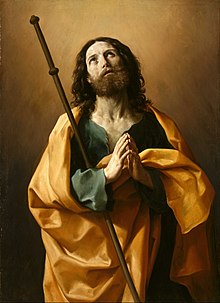 On a more positive note, July 25 was the Feast Day for James, son of Zebedee.  He’s one of several “James” in the New Testament. (“Mary” and “James” were both common names in  New Testament times.)  But this James is also called “St. James the Greater.”  (That post included the image at left, of St. James.)

And incidentally, this St. James is the Patron Saint of Pilgrims.

See for example, the September 2016 post On St. James, Steinbeck, and sluts.  The “sluts” in question were mentioned by Robert Louis Stevenson in his ground-breaking 1879 work Travels with a Donkey in the Cévennes.  (It was considered a “pioneering classic of outdoor literature,” and the inspiration for John Steinbeck‘s 1962 nonfiction work, Travels with Charley.)

The point being that I’ve gone on a few pilgrimages in my time, and am fixing to go on another one this September:  Hiking the Camino de Santiago in Spain.  And in the  Sluts post, I noted that in the spiritual literature of Christianity, the concept of pilgrim and pilgrimage may refer to “the inner path of the spiritual aspirant from a state of wretchedness to a state of beatitude:”

The post also said a pilgrimage can be  “one of the most chastening, but also one of the most liberating” of personal experiences.  Which occurred after last year’s hike on the Chilkoot Trail:

For my part, I certainly felt “chastened” after we got back to Skagway from the Chilkoot Trail.(Although the 10-of-12 beers that my nephew and I shared – of the two six-packs I bought – helped a lot too.)  And I had a blister-on-a-blister that got infected – that didn’t fully heal until three weeks after the hike – to further heighten the feeling of getting “chastened.”

Which brings us back to St. James the Greater, who is the Patron Saint of Pilgrims.

In the picture below, St. James is seen accoutred as a pilgrim, complete with the accessories “needed for a task or journey.”  That is, he is shown wearing a pilgrim’s hat and with a walking stick in the background.  And here’s part of the prayer to St. James:  “O Glorious Saint James … Obtain for us strength and consolation in the unending struggles of this life.”

To which we all might add a hearty Amen, “So be it!”

Especially as to those blisters-on-blisters that get infected.  (The two-six-pack cure:  Optional.) 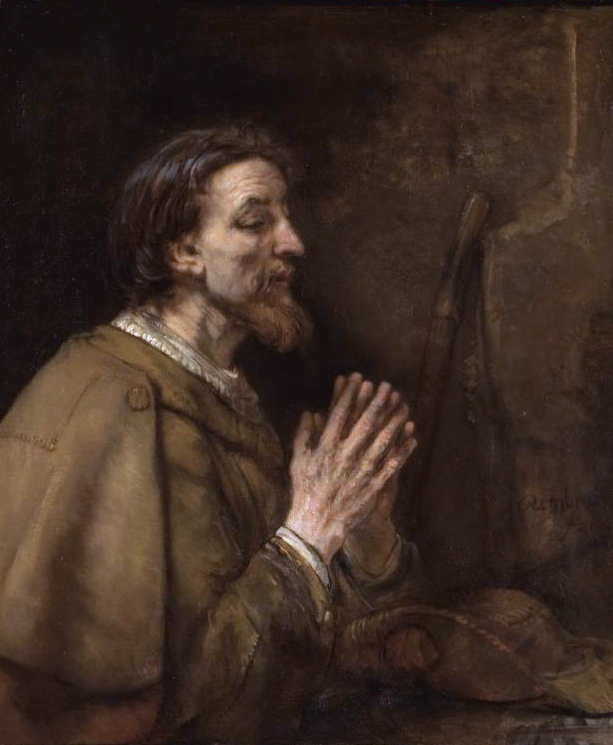 St. James the Greater, dressed and accoutred as the quintessential Pilgrim…

The upper image is courtesy of en.wikipedia.org/wiki/Penitent_Magdalene_(Titian,_1565):

Note” also that an asterisk in the main text indicates a statement supported by a reference detailed further in this “notes” section.  Thus as to “getting back on track,” that refers to getting back to the business of Bible-related posts, after “Comfort Zone Christians,” and The “Bizarro Rick Santorum.”

The Bible readings for the two feast days can be seen at Mary Magdalene, and St James, respectively.

The image to the right of the paragraph including “shown at right in a modern interpretation” was originally courtesy of “FutureChurch.”  A re-check of the link on July 30, 2017, showed that it included information on Mary Magdalene, but no longer included the “modern” image.

The lower image is courtesy of James, son of Zebedee – Wikipedia, with the full caption, “Saint James the Elder by Rembrandt[.]  He is depicted clothed as a pilgrim;  note the scallop shell on his shoulder and his staff and pilgrim’s hat beside him.”