Luke wrote the third-of-four Gospels, along with the book Acts of the Apostles.  (What is called “the fifth book of the New Testament.”)

I’ll be writing more on Luke the Evangelist below, and in doing so I’ll be citing St. Luke – 2015.  But first I want to note a revelation I had during last Sunday’s sermon.  It was about last Sunday’s Gospel, Mark 10:17-31.  (From the readings for Twenty First Sunday after Pentecost.)  It told the story of Jesus and the rich young man.

Matthew wrote that the rich young man first asked Jesus how to get “eternal life.”  (How to “get to heaven.”)  Then – after the young man told Jesus he already observed all the commandments – Jesus said:  “If you want to be perfect, go, sell your possessions and give to the poor.”  Luke’s Gospel added that when he heard this, the rich young man “became very sad, because he was very wealthy.”  That’s when Jesus said it would be “easier for a camel to go through the eye of a needle than for someone who is rich to enter the kingdom of God.”

But in last Sunday’s sermon, our visiting priest asked us to imagine something different.  Like what would have happened if the young man had agreed to do what Jesus said?

That is, suppose the rich young man had actually starting selling all his possessions and giving the profits to the poor.  The priest theorized that Jesus probably would have said this:  “Stop!  I was only trying to make a point!  Let’s work something out so you can keep your goods and possessions and put them to good use in the service of the Lord…” 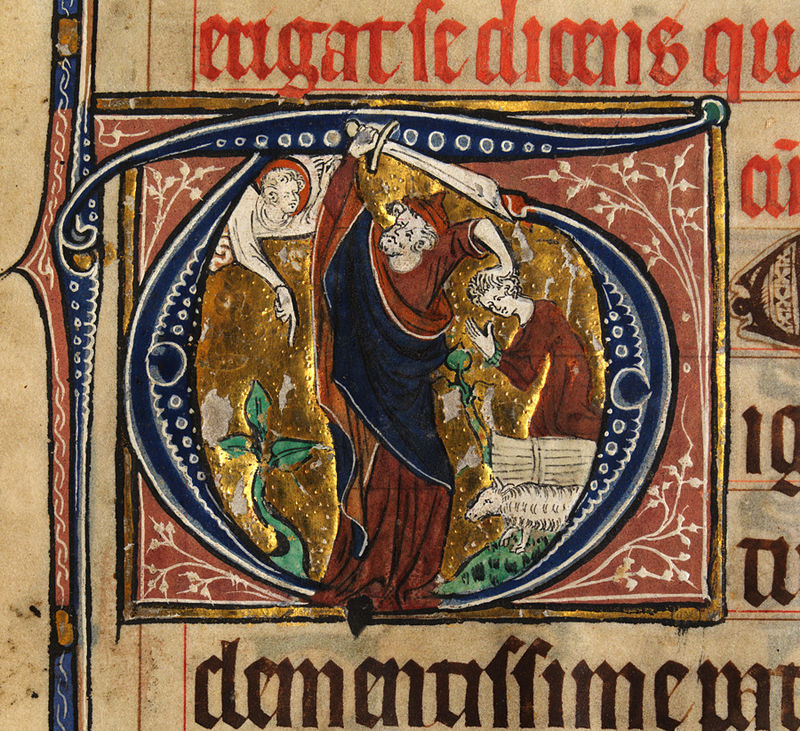 That’s when it hit me.  The priest’s theory wasn’t all that crazy.  There was legal precedent for his position.  It struck me that it could have been very much like what God did when he asked Abraham to sacrifice his own son.  And when Abraham indicated his willingness to follow God’s orders.  On that note, see Abraham and Isaac – Where God CHANGED some “traditional values and attitudes.”

That post noted that the Abraham-Isaac story bothers a lot of people, because it seems to show God ordering a father to kill his own son.  “And that’s the view you would take if you took the lesson literally.”  But at the time Abraham lived, child sacrifice was pretty routine.  In fact, you could call it a prevailing “traditional value.”

Which means the Abraham-Isaac story is not one of God being cruel.  Instead:

“[I]n that age, it was astounding that Abraham’s God should have interposed to prevent the sacrifice, not that He should have asked for it.”  [Rabbi Joseph Herman Hertz (1872 -1946)] interpreted the Akedah as demonstrating to the Jews that human sacrifice is abhorrent…  So to a reasonable Semite at the time … a father offering his son as a “sacrifice to the gods” was so common that the Akedah proved the noteworthy exception.

A note:  Akedah is Hebrew short-hand for the Abraham-Isaac story, and translates “The Binding.”

Which brings us back to Luke the Evangelist.  And speaking of developing your talents:  The noted Catholic writer Garry Wills – in his book What the Gospels Meant – noted that Luke wrote the longest of the four Gospels.  He added that Acts of the Apostles is almost as long, and that these two of Luke’s books together “thus make up a quarter of the New Testament.”  (And they’re longer than all 13 of Paul’s letters.)  He said Luke is rightly considered the most humane of the Gospel writers, and quoted Dante as saying Luke was a “describer of Christ’s kindness.”

Thus Luke’s Gospel was arguably “the most beautiful book that ever was.”

But – again speaking of developing your talents – Luke wasn’t just a great writer.  He was also – according to tradition – an artist.  Beyond that, he was said to be the first icon painter, and to have painted pictures of the Virgin Mary and Child, as shown in the image below.

Which means Luke’s version of the Jesus story is one we should pay special attention to.  And especially to being “humane” and active practitioners of “Christ’s kindness.” “Saint Luke painting the Virgin Mary and the Christ Child…”

The upper image is courtesy of Binding of Isaac – Wikipedia.  The full caption reads: “’The Sacrifice of Isaac’ by Caravaggio, in the Baroque tenebrist manner.”  As to the wording of the caption, see “Or words to that effect” – Wiktionary, and also “Or Words to that Effect” – Adoremus Bulletin, quoting the character Richard Rich in the plan “A Man for All Seasons.”

Re:  Abraham – Wikipedia.  The caption to the image to the right of the paragraph starting “That’s when it hit me” is captioned:  “Abraham about to sacrifice Isaac. From a 14th-century missal.”

As to the “Hertz” reference, “Rabbi Joseph Herman Hertz, CH (September 25, 1872 – January 14, 1946) was a Jewish Hungarian-born rabbi and Bible scholar. He is most notable for holding the position of Chief Rabbi of the United Kingdom from 1913 until his death in 1946, in a period encompassing both world wars and the Holocaust.”  Another note, “CH” stands for “Order of the Companions of Honour,” an order of the “Commonwealth realms … as a reward for outstanding achievements and is ‘conferred upon a limited number of persons for whom this special distinction seems to be the most appropriate form of recognition.'”

Re:  “He wanted the rich young man to use and develop his talents.”  The full blog-post cite – from December 2015 – is Develop your talents with Bible study.