Most people think Halloween is one day, October 31st.  But there are actually three days of “Hallowe’en.”  Or more precisely, Halloween is the first day of the Halloween “Triduum.”  (In the alternative Allhallowtide.)

And Triduum is just a fancy Latin word for “three days.”

In turn the word “hallow” – in both “Hallowe’en” and “Allhallowtide” – came from the Old English word for “saint,” halig.  That eventually became “hallow.”  (Maybe because it was easier to say.)  Which led to November 1 now being called All Saints’ Day.  But to the Old English, “All Haligs’ Day” – November 1 – eventually became “All Hallows Day.”  Then the “eve” before that Feast Day – October 31 – became “All Hallows Evening.”  In time that shortened to “All Hallows E’en.”  And later still it shortened to “Hallowe’en,” then just plain Halloween.

Wikipedia said this three-day period is a “time to remember the dead, including martyrs, saints, and all faithful departed Christians.”  The main day of the three is November 1, now called All Saints Day, but previously referred to as Hallowmas.  It was established sometime between 731 and 741 – over 1,300 years ago – “perhaps by Pope Gregory III.”

Put another way, November 1 honors “all the saints and martyrs, both known and unknown.”  In other words, special people in the Church.  (A saint is defined as one “having an exceptional degree of holiness,” while a martyr is someone “killed because of their testimony of Jesus.”)  On the other hand, November 2 – All Souls’ Day – was designed to honor “all faithful Christians … unknown in the wider fellowship of the church, especially family members and friends.’”  In other words, the rest of us poor schmucks.  (Those of us who have died, that is.)

So back to Halloween:  It all started with an old-time belief that evil spirits were most prevalent during the long nights of winter.  The “old-timers” also thought the “barriers between our world and the spirit world” were at their its lowest and most permeable the night of October 31:

Another thing they did was build bonfires, literally bonefires.  (That is, “bonfires were originally fires in which bones were burned.”)  The original idea was that evil spirits had to be driven away with noise and fire.  But that evolved into this:  The “fires were thought to bring comfort to the souls in purgatory and people prayed for them as they held burning straw up high.”

There was another old-time custom, that if you had to travel on All Hallows E’en – like from 11:00 p.m. until midnight – your had to be careful.  If your candle kept burning, that was a good omen.  (The person holding the candle would be safe in the upcoming winter “season of darkness.”)  But if your candle went out, “the omen was bad indeed.”

Then there were the pumpkins.  Apparently some other old-time people set out carved pumpkins on their windowsills, to keep “harmful spirits” out of their home.   But yet another tradition said  jack-o’-lanterns “represented Christian souls in purgatory.”  And while today jack-o’-lanterns are made from pumpkins, but were originally carved from large turnips. 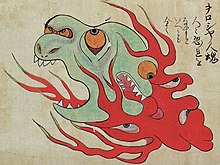 In turn, both the jack-o’-lantern and Will-o’-the-wisp – at right, in a Japanese interpretation – are tied in with the strange ghostly light known as ignis fatuus.  (From the Medieval Latin for “foolish fire.”)  That refers to the “atmospheric ghost light seen by travelers at night, especially over bogs, swamps or marshes.  It resembles a flickering lamp and is said to recede if approached:”

Tradition had it that this ghostly light – seen by travelers at night and “especially over bogs, swamps or marshes – resembled a flickering lamp.  The flickering lamp then receded if you approached it, and so it “drew travelers from their safe paths,” to their doom…

Finally we get to the third of the three-day holiday – November 2 – All Souls’ Day.  The original idea was to remember the souls of “the dear departed,” illustrated by the painting below.

“Observing Christians typically remember deceased relatives” on November 2.  The custom began in the sixth century with a Benedictine custom of commemorating deceased members of a given monastery at Whitsuntide.  (Or “Whit(e) Sunday,” also known as Pentecost, held 50 days after Easter Sunday.)  That changed in the 11th century when Saint Odilo of Cluny chose the day after All Souls Day to commemorate “all the faithful departed … with alms, prayers, and sacrifices for the relief of the suffering souls in purgatory.”

On that note, here’s the Collect for All Saints Day, from the Lectionary Page website:

Almighty God, you have knit together your elect in one communion and fellowship in the mystical body of your Son Christ our Lord:  Give us grace so to follow your blessed saints in all virtuous and godly living, that we may come to those ineffable joys that you have prepared for those who truly love you;  through Jesus Christ our Lord, who with you and the Holy Spirit lives and reigns, one God, in glory everlasting.  Amen.

So there you have it.  In closing, here’s wishing you a happy three days of Hallowe’en.