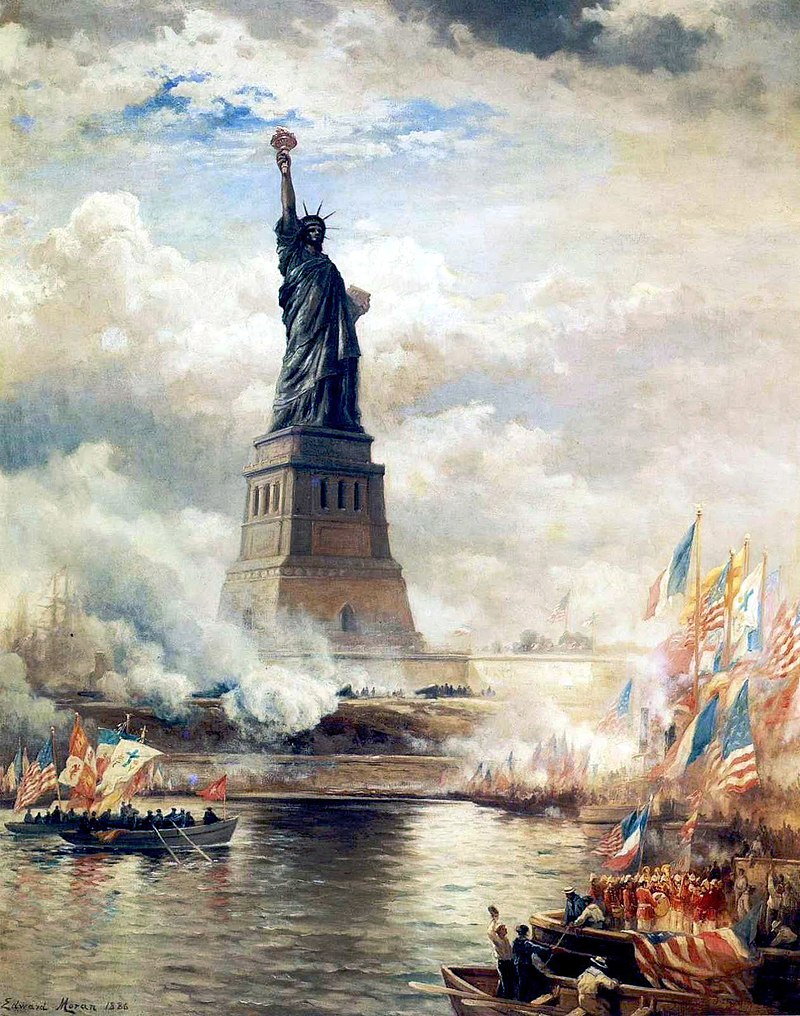 Is the inscription on “Liberty Enlightening the World” really “just a poem?”

It was quite a moving sight. every time I passed by.  So naturally I figured the statue – together with the inscription on it – would have a special meaning for all real Americans:

“Give me your tired, your poor, Your huddled masses yearning to breathe free,  The wretched refuse of your teeming shore.  Send these, the homeless, tempest-tost to me…

But not everyone seems to agree.  Like back in 2014, when  someone wrote a Letter to the Editor suggesting that “Congress read the inscription on the base of the Statue of Liberty in order to make a more informed decision regarding immigration.”

It sounded like a good idea to me.  But one knucklehead objected:

[The inscription on the Statue of Liberty] is just a poem.  It’s not one of our founding documents, nor is it a law, nor is it anything more than what it is:  a poem.  A nice poem, with stirring, emotion-driven rhetoric, yes, but a poem nonetheless. [E.A.]

See Words on Statue of Liberty merely a poem – azcentral.com.

But that – it seemed to me – was like saying the Bible is “just a nice set of old-time stories.”  And by the way, it turns out that about 75% of the Old Testament is also “just a bunch of poems.*”

That’s where this morning’s Daily Office Readings came in.

They seemed to support my theory that we get a whole lot more from the Bible than just a bunch of “mere poems,” or just a “nice set of old-time stories…”

Acts 25:13-27 tells of the Apostle Paul, on trial before Porcius Festus.  (Procurator of Judea, at left in yellow).

He later asked for help from Herod Agrippa.  (The puppet King of Judaea, which was actually under Roman rule.)  As noted in Acts 25:2, “the chief priests and the Jewish leaders [had] appeared before him and presented the charges against Paul.”

In response to the charges “Festus laid Paul’s case” before Agrippa.  He then added, in Acts 25:16:  “I told them that it is not the Roman custom to hand over anyone before they have faced their accusers and have had an opportunity to defend themselves against the charges.”

But – after having been able to both face his accusers and present a defense – Paul appealed to Caesar.  (Apparently rather than face a hostile trial in Jerusalem.*)  Festus then responded:

I have nothing definite to write to our sovereign about him.  Therefore I have brought him before all of you, and especially before you, King Agrippa, so that, after we have examined him, I may have something to write – for it seems to me unreasonable to send a prisoner without indicating the charges against him.’

Which means that there – in today’s short New Testament reading – are found three key Constitutional safeguards in our  Sixth Amendment.  (And – as noted below –  if there’s any group more despised than immigrants, it’s criminal defendants.)  See also Confrontation Clause:

In noting the right’s long history, the United States Supreme Court has cited Acts of the Apostles 25:16, which reports the Roman governor Porcius Festus, discussing the proper treatment of his prisoner Paul:  “It is not the manner of the Romans to deliver any man up to die before the accused has met his accusers face-to-face, and has been given a chance to defend himself against the charges.”

Note also that in tracing the history of the right, the Supreme Court cited the Bible, not “Roman law.”  (Meaning the Bible is arguably more important…)  As to the “chance to defend himself against the charges,” see also The Right to Present Defense Evidence – The Advocate.  That article noted that the “right to present a defense is as American as apple pie.”

Which brings us back to my theory that we get a lot more from the Bible than just a bunch of “mere poems,” or just a “nice set of old-time stories.”  Like, maybe a national consciousness, if not a national conscience?  Which again brings up the fact that if there’s any group of people more despised than criminal defendants, it’s immigrants.  (Legal or otherwise.)

But what does the Bible say about immigrants?  (Legal or otherwise.)

For one example see Exodus 22:21, in the WEB:  “You shall not wrong an alien, neither shall you oppress him, for you were aliens in the land of Egypt.”  Then there’s Leviticus 19:33-34, in the ISV:  “If a resident alien lives with you in your land, you are not to mistreat him.  You are to treat the resident alien the same way you treat the native born among you – love him like yourself, since you were foreigners in the land of Egypt.”

And that brings up one of the psalms in today’s Daily Office Readings. (See NRSV.)  I’m referring to Psalm 137, “one of the best known of the Biblical psalms.”  As Wikipedia noted:

The psalm is a hymn expressing the yearnings of the Jewish people in exile following the Babylonian conquest of Jerusalem in 607 BCE.

But Psalm 137 was written centuries later, after that long-awaited Promised Land had been lost, through invasion and exile.  Which means that there may be a bit of enlightened self-interest at issue here.  (See also Karma, and Turnabout is fair play.)  For the Bible take, see Luke 6:38:

Give, and you will receive.  A large quantity, pressed together, shaken down, and running over will be put into your pocket.  The standards you use for others will be applied to you.”

The point being that Mr. “Just a Poem” – quoted above – may want to re-think his negative attitude about members of Congress re-reading the inscription on the Statue of Liberty.

And while they’re at it, those members of Congress might want to go back over those portions of the Bible dealing with immigrants, foreigners and/or “aliens.” 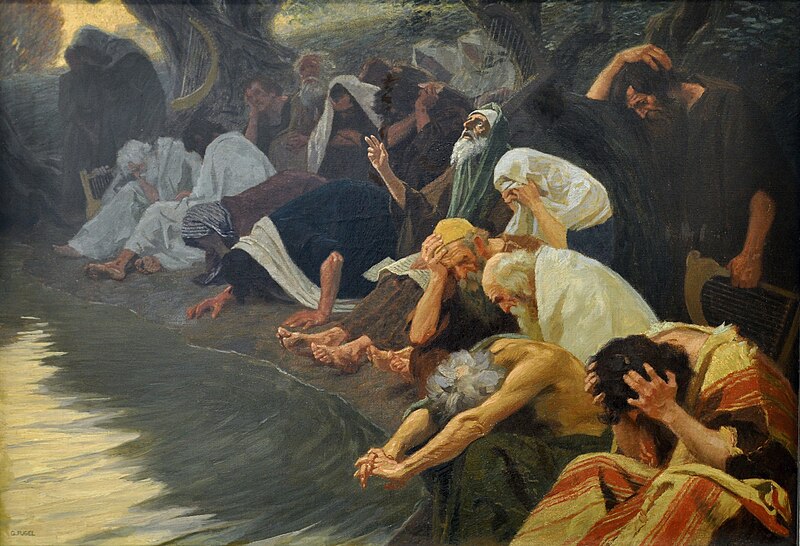 “By the rivers of Babylon we sat and wept,” remembering our lost homeland…

The upper image is courtesy of Statue of Liberty – Wikipedia, the free encyclopedia.  The caption:  “‘Unveiling of the Statue of Liberty Enlightening the World’ (1886) by Edward Moran. Oil on canvas. The J. Clarence Davies Collection, Museum of the City of New York.”

Re:  The Old Testament as also arguably “just a bunch of poems.”  See Poetry in the Hebrew Bible:

Approximately 75% of the Hebrew Bible is poetry.  All of Psalms and Proverbs are Hebrew poetry and many other books, such as the book of Genesis, are filled with poetry.  The reason much of the Bible was written in poetry is that it was originally sung and stories that are sung are much easier to memorize that when simply spoken.  There is much more poetry in the Bible than most realize because most people do not understand it.*

(See also Biblical poetry – Wikipedia, and The Therapeutic Benefit of Poetry:  “From the beginning of time, poetry has been a means for people to express their deepest emotions and create healing in ritual and ceremony.”  See also my companion blog, at “No city for Grouchy Old White People.”

The caption in Wikipedia for the image of Porcius Festus reads:  “Stained glass window in St. Paul’s Cathedral, Melbourne showing Festus in yellow.”  Note the NIV translation of Acts 25:27 reads:  “For I think it is unreasonable to send a prisoner on to Rome without specifying the charges against him.”

Re:  “Hostile trial in Jerusalem.”  Isaac Asimov said Paul wasn’t sure he’d get a fair trial in Jerusalem, even with Festus presiding.  “Indeed, he probably suspected that Festus would be successfully pressured into a conviction, as had been the case with Pontius Pilate thirty-two years  before.” (Referring to Jesus’ conviction.)  See Asimov’s Guide to the Bible (Two Volumes in One),  Avenel Books (1981), at pages 1081-83, which also noted that Herod was “scorned as a Roman puppet.”

The “apple pie” image is courtesy of priceonomics.com.

Re:  The Bible on prisoners.  See Isaiah 61:1:  “The LORD has anointed me to proclaim good news to the poor. He has sent me to bind up the brokenhearted, to proclaim freedom for the captives and release from darkness for the prisoners,” mirrored and/or quoted in Luke 4:18.  Then there was tomorrow morning’s New Testament reading, which included 2 Timothy 2:9:  “I’m suffering to the point that I’m in prison like a common criminal.”  See Twenty First Sunday after Pentecost.

Re:  Congress-people going back over those portions of the Bible dealing with immigrants, foreigners or “aliens.”  If nothing else they might save themselves a whole lot of ‘Splainin to do, later on at the end of their lives.  Or they might not end up weeping “by the waters of Babylon…”