Last Sunday – November 27, 2016 – was the First Sunday of Advent.  And this is the theme for that Season of Advent.  That is, that season of the church-year that ends on Christmas Eve: 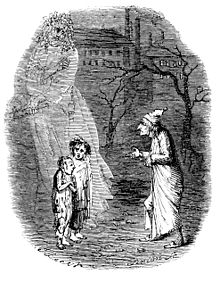 And as even Scrooge recognized, “Christmas is a very busy time for us.”  (The “spirit of Scrooge” is illustrated at right…)

But this time of year – in the church calendar – can also be very confusing.  That’s because both the Season of Advent and the church-year itself actually begin with St. Andrew, the “First Apostle.*”  His Feast Day is celebrated on November 30, today.

And according to the National Catholic Register, “St. Andrew was one of Jesus’ closest disciples, but many people know little about him.”  Which is another way of saying that he was pretty important, but that he often gets overlooked:

For more on this day see On St. Andrew, the “First Apostle.”  But getting back to the Season of Advent, see An early Advent medley, or On Advent – 2015.  (From last year.)

Or for that matter see On the readings for Advent Sunday, from 2014:

Advent Sunday is the first day of the liturgical year in the Western Christian churches.  It also marks the start of the season of Advent…  [T]he symbolism of the day is that Christ enters the church.   Advent Sunday is the fourth Sunday before Christmas Day. This is equivalent to the Sunday nearest to St. Andrew’s Day, 30 November, and the Sunday following the Feast of Christ the King.

See Advent Sunday – Wikipedia.  The article added that for a time – starting about 300 A.D. – Advent was “kept as a period of fasting as strict as in Lent.”  But around 1917 the Catholic Church “abolished the precept of fasting …  but kept Advent as a season of penitence.”

I’ll be writing more about Advent in the coming weeks, but one thing to remember is that for those four Sundays, the Old Testament readings will be from the prophet Isaiah, shown below:

Isaiah is the prophet who guides our journey through Advent as we prepare for Christmas. Advent is a season of joyful anticipation, and Isaiah invites us to look forward to the coming of the Messiah, to prepare the way of the Lord.

The prophet Isaiah, featured in this season’s Advent O.T. readings…

I originally had an upper image “courtesy of ncregister.com/blog/st.-andrew-apostle-11-things-to-know and share, which included the full text of St. Andrew’s words before he died, showing ‘a very profound Christian spirituality.  [He] does not view the Cross as an instrument of torture but rather as the incomparable means for perfect configuration to the Redeemer, to the grain of wheat that fell into the earth.   Here we have a very important lesson to learn: Our own crosses acquire value if we consider them and accept them as a part of the Cross of Christ…'”  See also Andrew the Apostle – Wikipedia, and as noted, St Andrew Saltire – Image Results.

“Note” also that an asterisk in the main text indicates a statement with a reference detailed further in this, the “notes” section.  Thus, as to the “saltire” see St Andrew … 5 facts you might have known:

Legend has it that he [Andrew] asked to be tied to an X-shaped cross because he did not feel worthy of dying on the same shape of cross as Jesus.  The shape has been represented by the white cross on the Scottish flag, the Saltire, since at least 1385.

As to the Feast of St. Andrew beginning the new church year, see Anticipating Christmas, Beginning with Saint Andrew.  Or see St. Andrew, from the Satucket website:

Just as Andrew was the first of the Apostles, so his feast is taken in the West to be the beginning of the Church Year…  The First Sunday of Advent is defined to be the Sunday on or nearest his feast (although it could equivalently be defined as the fourth Sunday before Christmas Day).

Re:  “Isaiah [as] the prophet who guides our journey.”  See Isaiah: Old Testament prophet for the Advent season, which added:  “Isaiah urges us to straighten out our crooked ways, tear down our mountains of misdeeds, and fill in the valleys of our bad habits.”