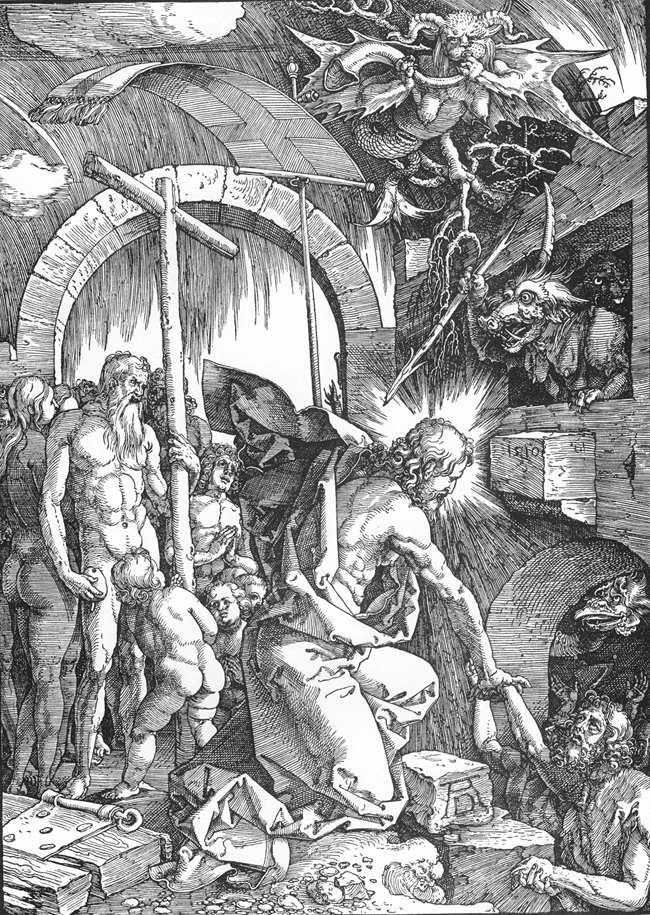 The next major Feast Day commemorates the Ascension, and this year comes on May 25.  This Feast commemorates the “bodily Ascension of Jesus into heaven,” and is “ecumenical.”  (That is, it’s “universally celebrated.”)  In terms of importance it ranks up there “with the feasts of the Passion, of Easter, and Pentecost.”

It’s always celebrated on a Thursday, the 40th day of Easter.

On that note, last year – 2016 – Ascension Day was celebrated on May 5.  (See Ascension Day and Pentecost – 2016, a post featuring the image above left, with the caption:  “Before Jesus could Ascend into Heaven, He had to Descend into Hell….”)

Which is another way of saying that since Easter Sunday is a moveable feast – a “liturgical event that comes on a different date each year – all the other feast days measured after Easter get shifted around too.  (Like Ascension Day and Pentecost.)  And all that’s not to be confused with A Moveable Feast.  That’s the title of Ernest Hemingway‘s memoir – published posthumously in 1964 – about his years as a struggling young writer in Paris in the 1920s.

And just as an aside, the title of Hemingway’s memoir was a “play on words for the term used for a holy day for which the date is not fixed.”  (Like Christmas, always celebrated on December 25.)  Which is as good a definition as any, but we digress!!!

The event itself was described in Luke 24, which starts with the first Easter day – “the women” finding the empty tomb – followed by the Road to Emmaus appearance.  That’s followed in turn by the last of the post-Resurrection appearances of Jesus.  The two disciples at Emmaus had gotten up and “returned at once to Jerusalem.  There they found the Eleven and those with them, assembled together.”  Jesus then appeared in the midst of all of them, and taught them things; i.e., He “opened their minds so they could understand the Scriptures.” (E.A.)

And finally, Jesus led the disciples out of the room and on out of Jerusalem.  See Luke 24:50-51:

When he had led them out to the vicinity of Bethany, he lifted up his hands and blessed them.  While he was blessing them, he left them and was taken up into heaven.

All of which may be pretty hard to believe, but that’s also addressed in 2014’s On Ascension Day.  It talked about things like Arguing with God – which included the imag at left – and the First law of thermodynamics.  (Which is – I argued – proof positive that the human soul – a definite form of energy – is neither “created nor destroyed, but simply changes form.”)

The point being that there are some Christians who definitely believe you shouldn’t argue with God.  And there are lots of other people out there who don’t believe the whole idea of life after life – or after death – or for that matter the “bodily Ascension of Jesus into heaven.”

To explain:  If you type “ascension day” in the search box above right, that Top Ten post will be the fourth post down.  (Right before Jesus in Hell.)  Specifically, the list at issue is Robin Williams’ Top 10 reasons to be an Episcopalian.  (Which is definitely one of the “believer” groups.)

One of the key points of Williams’ list:  Stop worrying so much about trying to understand the hard-to-understand parts of the Bible.  (Like the bodily Ascension of Jesus into Heaven.)

Instead, focus on our own “life’s journey, leaving our destination to a ‘Higher Power.’”  That is, “celebrate life as a pilgrimage as the basic metaphor of Christian life.”  Which is one way to turn tragedy into something to laugh at, and so deal with much better.  And so enjoy the pilgrimage:

I have a feeling that somewhere, somehow – “even as we speak” – the spirit of Robin Williams is making some being – some entity – laugh his or her spiritual butt off.

And the key to that approach is reading the Bible with an open mind.  In turn, if anyone objects, we can say we are simply following the example of Jesus as told in Luke 24:45:

Then he opened their minds so they could understand the Scriptures. 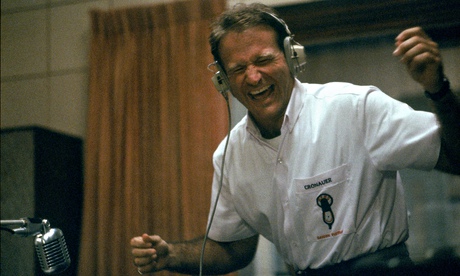 The lower image is from Channel 4 News apologises for Robin Williams gaffe.  The “gaffe” came after Williams‘ death-by-suicide on August 11, 2014:  “Broadcaster criticised after tribute to late actor features ‘get a rope and hang me’ quote from Good Morning Vietnam.”  The Gaffe post added this:

Channel 4 News has apologised after airing a clip of Robin Williams in Good Morning Vietnam saying: “Get a rope and hang me,” a day after the star’s suspected suicide. . .  Channel 4 came in for criticism for the gaffe.