“Philip the Apostle – the saint we know is being celebrated on Monday, May 2…”

Monday, May 1, was the  Feast Day of and for Saint Philip and Saint James.  I covered these two saints in last year’s Philip and James – Saints and Apostles.

That post included the painting of St. Philip at the top of the page.  (Along with the “quotated” caption discussed further below.*)  It also included the photo at right – of Clint Eastwood as Dirty Harry – along with the mock caption:

(The post talked about the kind of ritual – religious and otherwise – that should “pervade a healthy society.”  It also noted that a good pilgrimage – a kind of religious ritual “on the move” – can be “one of the most chastening, but also one of the most liberating” of human experiences.)

But we digress…   The point of the caption at the top of the page is that we know who the “Philip” is that we celebrate on May 1.  We’re not so sure about the “James…”

According to the Satucket (Daily Office) article on Philip and James – there are eight possible “Jameses” who could be celebrated on May 1.  These include but not limited to:  1) James the Greater (or “James, son of Zebedee”);  James the Less (“either the younger or shorter of two”); and/or James the Just (also known as the brother of Jesus).  At any rate, the full list of eight is included in the notes below.  (And incidentally, that “James the son of Zebedee” is the patron saint of pilgrims and pilgrimages.  See e.g., On “St. James the Greater.”) 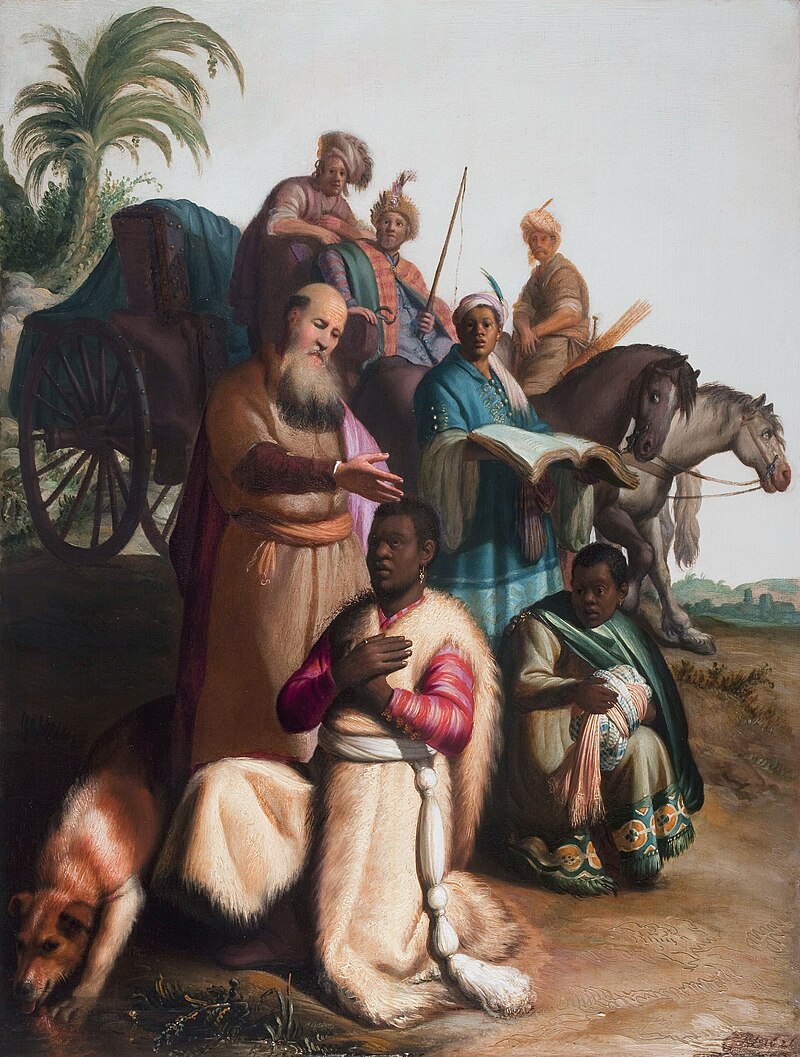 This Philip was the Apostle described in Acts of the Apostles (8:26-40), and the Wikipedia article on Philip and the Ethiopian eunuch. (As shown at left.)   And speaking of last year’s post – Philip and James – Saints and Apostles – it noted that as a eunuch the Ethiopian was an untouchable, at least from a Christian fundamentalist standpoint.

That’s because of Deuteronomy 23:1.  On that note, the New Living Translation is pretty specific (if not graphic):  “If a man’s testicles are crushed or his penis is cut off, he may not be admitted to the assembly of the LORD.”  The King James Bible – the one that God uses – puts the matter more delicately:  “He that is wounded in the stones, or hath his privy member cut off, shall not enter into the congregation of the LORD:”

Yet Philip, guided by God’s Spirit, does not hesitate to share the good news of God’s love and salvation with this less than whole Ethiopian and to baptize him into the faith, to welcome him into the life of the Christian church.  This new faith is for all, God’s love is for every human being no matter what disability or disease or affliction has come our way.

(See “Wesley Uniting Church.”)  In other words, the point of Acts 8:26-40 – and the story of Philip and the Ethiopian eunuch – is that God’s Love is Universal.

Which is – I suppose – just another way of saying that God will accept anyone.  (As described in John 6:37, where Jesus said, “whoever comes to me I will never drive away.”)  Or see On total love – and “the Living Vine.”  The point of that post as well was, first, that God’s love is universal.

The second point was that we as Christians should try to imitate that all-encompassing love.  Or as Jesus aptly – and succinctly – put it in his summary of the entire Bible:

That’s from Matthew 22, verses 37-40, emphasis added.  In plain words, our goal in life should be to “live in full communion,” with both God and even our most obnoxious neighbor.  And be good stewards of nature besides.  (On that note, Earth Day was last April 22.) The upper image is courtesy of Philip the Apostle – Wikipedia, the free encyclopedia.  The caption: “St. Philip, by Peter Paul Rubens, from his Twelve Apostles series (c. 1611), at the Museo del Prado, Madrid.”  That article added:  “In the Roman Catholic Church, the feast day of Philip, along with that of James the Just, was traditionally observed on 1 May, the anniversary of the dedication of the church dedicated to them in Rome (now called the Church of the Twelve Apostles).”  A note:  “James the Just” is third on the Satucket list, just below James the Greater and James the Lesser.

And I filled out the massacre with the four part harmony, and wrote it
Down there, just like it was, and everything was fine and I put down the
Pencil, and I turned over the piece of paper, and there, there on the
Other side, in the middle of the other side, away from everything else on
The other side, in parentheses, capital letters, quotated, read the
Following words:

(“KID, HAVE YOU REHABILITATED YOURSELF?”)

Re:  The full list of eight possible “Jameses” celebrated on May 1: 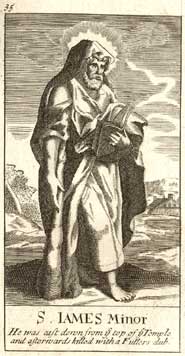 (3) JAMES THE JUST: James called “the brother of the Lord” appears in Acts 12:17 and thereafter (A 15:13; 21:18; 1C 15:17; Ga 1:19; 2:9,12) as the leader of the Jerusalem congregation. He is counted by later Church historians as the first bishop of Jerusalem, with Simeon (described as also a kinsman, something like a great-nephew of Joseph) as the second. According to the Jewish historian Josephus, James was put to death by order of the high priest during an interval between Roman governors, over the protests of the Pharisees, who thought him an upright man. He is known as James the Just or James of Jerusalem or James Protepiscopus (first bishop).

(4) JAMES THE WRITER: One of the New Testament Epistles is written by a James. (See Jas 1:1)

(7) JAMES THE KINSMAN OF JUDE THE APOSTLE: When Luke lists the Apostles (L 6:16; A 1:13), he has, in places 9 thru 11, “James the son of Alphaeus, Simon the Zealot, and Judas of James.” [This is not Judas Iscariot.] Now, “Judas of James” would ordinarily mean “Judas son of James,” and so the RSV translates it. However, the KJV renders is as “Judas the brother of James,” and some suppose him to be the brother of James the son of Alphaeus, so that we have no fewer than three pairs of brothers among the disciples: Peter and Andrew, sons of Jonas; James and John, sons of Zebedee; James and Jude, sons of Alphaeus. This seems unlikely, since (a) if Luke had intended us to understand that the two were brothers, he would have written them together instead of separating them by Simon the Zealot (but note P 3:16-18); and (b) if he had meant us to understand “brother of” rather than the more usual “son of”, he would have said “brother.”

(8) JAMES THE BROTHER OF JUDE THE WRITER:   The author of the Epistle of Jude calls himself the brother of James. Presumably this James would be someone well-known to his readers, otherwise why bother to mention him?

The lower image is courtesy of Earth Day – Wikipedia.  See also Remembering the Purpose of Earth Day, and from last year, Pope Francis Urges All People to Protect the Earth On 45th Anniversary of Earth Day.  (For a contrasting take on the “politics” of Pope Francis,” see On the “Gospel of Marx.”)