I’ve gotten to the point – in writing this blog – that I’ve covered most of the feast days and Bible readings.  So now I’m free to go back and re-visit “this time last year.”  And, when necessary, review what I wrote, then update based on what’s happened during that last year.

Or I can go back to those lessons that need repeating:  Such as Jesus giving a simplified, “Cliff’s Notes” summary of the whole Bible, noted below.  (He “boiled the whole Bible down to two simple ‘shoulds.'”)

Your rounded thighs are like jewels, the work of a master hand.  Your navel is a rounded bowl that never lacks mixed wine.  Your belly is a heap of wheat, encircled with lilies.  Your two breasts are like two fawns, twins of a gazelle.

Which made me wonder:  Why don’t Fundamentalists interpret the Song of Songs literally?  Why don’t those Bible Literalists adhere to the “exact letter or the literal sense” of this book, like all the others in the Bible?  Could it be a matter of selective interpretation?

Which brings up the whole point of this blog:  That if you limit your Bible study to a purely literal interpretation, you’re robbing yourself of at least half it’s value.  But if you look at the Bible with an open-minded spiritual interpretation, your study can take you to exotic adventures and explorations that you couldn’t have dreamed of before.

Or as Paul said, God made us “servants of a new covenant not based on the letter [of the law] but on the Spirit, for the letter kills, but the Spirit gives life.”  (2d Corinthians 3:6.)  Or see Luke 24:45, where Jesus “opened their minds so they could understand the Scriptures.”  Put another way, if Jesus had been a conservative – or a literalist – we’d all still be Jewish.

And besides, by taking that “open” approach you won’t have to find a non-erotic literal-but-pure meaning of “your rounded thighs are like jewels, the work of a master hand…”

Which means that whenever you read something in the Bible that doesn’t make sense, or might mean two different things, or seems contrary to “common sense,” you have this Summary to fall back on.  (It also works when a slick-haired televangelist says what just doesn’t sound right.)

In other words, don’t take an isolated passage from the Bible out of context and have your whole life revolve around.  Don’t be like “Stumpy” – the snake handler below – based on a too-literal interpretation of Mark 16:18.  Use a little common sense!

Or at least be consistent.  If you interpret Mark 16:18 literally, do the same for Song of Solomon 7:1-3:  “Your rounded thighs are like jewels…  Your two breasts are like two fawns…” 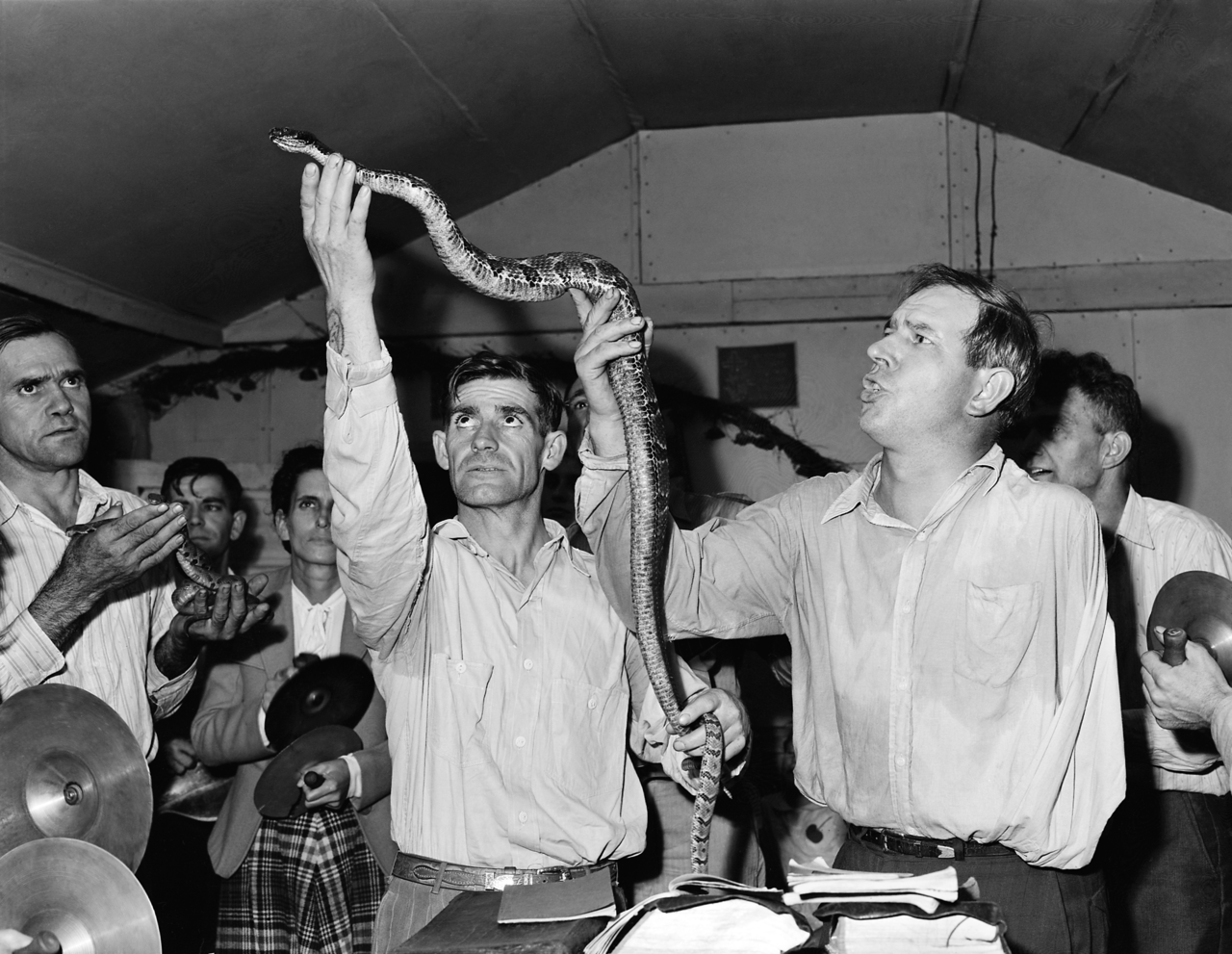 The upper image is courtesy of Solomon – Wikipedia.  The caption:  “The Visit of the Queen of Sheba to King Solomon,’ oil on canvas painting by Edward Poynter, 1890.”